As usual, an insane amount of content
24 September, 2020 by rawmeatcowboy | Comments: 0 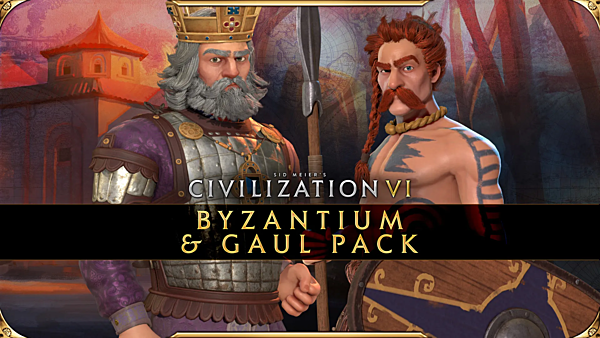 Civilization VI has gotten an update today, which rolls out the red carpet for the Byzantium & Gaul Pack. Even if you aren't getting that pack, there's a free update that includes all sorts of tweaks, bug fixes, and more. You can check out the extensive patch notes below.

Classical Era unit that replaces the Quadrireme. These units have greater range than the Quadrireme and +10 Combat Strength against units.

Heavy and Light Cavalry do full damage against cities following the same religion as Byzantium. Gain the Tagma unique unit when the Divine Right civic is discovered.

Medieval Era unit that replaces the Knight. Land units within 1 tile of the Tagma receive +4 Combat Strength or Religious Strength.

Cheaper and available earlier than the district it replaces, the Industrial Zone. The Oppidum district is defensible with a ranged attack. When the first Oppidum is constructed, the Apprenticeship technology is unlocked. Major adjacency bonus from Quarries and strategic resources.

Ability - King of the Eburones

Gain Culture equal to 20% of the unit’s cost when a non-civilian is trained. Anti-Cavalry, Melee, and Ranged Units receive +2 combat for every adjacent military unit.

With Dramatic Ages enabled, the stakes of each Age are much higher! Aside from the initial Age, each Age will be either Golden or Dark, depending on the civilization’s Era Score. Era Score can be earned by completing Techs and Civics and from promoting units (for each promotion after the first). If players earn a Golden Age, any excess Era Score will turn into extra Loyalty pressure, which can be a significant factor if a neighbor has fallen into a Dark Age. In addition, players will have access to powerful Policy cards that you can use in the Wildcard slot of your government but watch out – entering a Dark Age means that some of your cities will rebel! Players in Dark Ages will have a portion of their empire immediately turn into Free Cities, and these Free Cities can exert pressure on other cities. On easier difficulty settings, AI players lose many more cities than players. On harder difficulty settings, human players do. On Prince, they lose an equal amount.

Available from Classical to Medieval Eras:

Mandala State: +4 Culture for every Wonder. Each Wonder in your cities cause foreign cities within 9 tiles to lose 2 Loyalty per turn.
Free Inquiry: Commercial Hubs and Harbors provide Science equal to their Gold bonus. Campuses provide Gold equal to their Science bonus.

Available from Classical to Renaissance

Praetorian Guard: Wounded units can heal +10 HP per turn. +2 Production to Encampment districts and buildings.
Exodus of the Evangelists: +2 Movement for Missionaries, Apostles, Gurus, and Inquisitor; newly trained ones receive +2 Charges. +4 Great Prophet Points
Monumentality: +2 Movement for Settlers and Builders. Civilian Units may be purchased with Faith. Builders are 30% cheaper to purchase.

Available from Renaissance to Modern Eras

Sakdina: While your projects are active each of your Citizens exerts +0.5 Loyalty pressure to their city. When your projects complete, receive +10% additional Great People Points for every Building in that project’s district.
Reform the Coinage: Your Traders cannot be Plundered. International Trade Routes provide +3 Gold per specialty district in the foreign city.

Available from Industrial to Modern Eras

Solidarity: All Governors exert 2 additional foreign Loyalty pressure. All your cities with governors receive +25% Gold and +25% Faith.
Wish You Were Here: +100% Tourism to all National Parks and +50% Tourism from World Wonders.
Sky and Stars: +30% Production to Spaceports and Aerodromes. +15% Science and Production to Cities with either a Spaceport or Aerodrome.

Available from Information to Future Eras

[Gathering Storm] Popular Front: +100% Favor from Suzerainty of City-States and Alliance Level. Your Trade Routes to City-States provide +4 to all yields.
[Gathering Storm] Military-Industrial Complex: All improved Aluminum, Oil, and Uranium resources yield 2 additional resource per turn. All combat units receive +5 Combat Strength and, if the unit has a range attack, +1 Range.

Available from Classic to Medieval Eras

Available from Classical to Renaissance Eras

Inquisition: Start Inquisition with 1 Apostle charge. All religious units are +15 Religious Combat Strength in friendly territory. BUT: -15% Science in all cities.
Decentralization: Cities with 6 or less population receive +4 loyalty per turn. BUT: Cities with more than 6 population receive -15% Gold.
Elite Forces: +100% combat experience for all units. BUT: +1 Gold to maintain each Spy and military unit.

Available from Classical to Industrial Eras

Available from Renaissance to Modern Eras

Samoderzhaviye: +50% Production in your Capital. BUT: All Governors are neutralized and cannot be reestablished.

Robber Barons: +50% Gold and +25% Production in Cities with a Bank or Shipyard. BUT: -2 Amenities in all cities.

Despotic Paternalism: +4 Loyalty per turn in cities with Governors. BUT: -15% Science and -15% Culture in all cities without a Governor

Requirements: Must be built adjacent to an Encampment with a Barracks building and on Flat land.
Grants 3 Archers, 3 Spearmen, and a Battering Ram. +50% Production towards anti-cavalry units. +3 Gold per turn.

Highlands - Test your civilization against a map dominated by hills and mountain ranges.