Capcom reconfirms that Monster Hunter Rise is running on a standard Switch, says they have "no idea" if a Switch Pro is coming 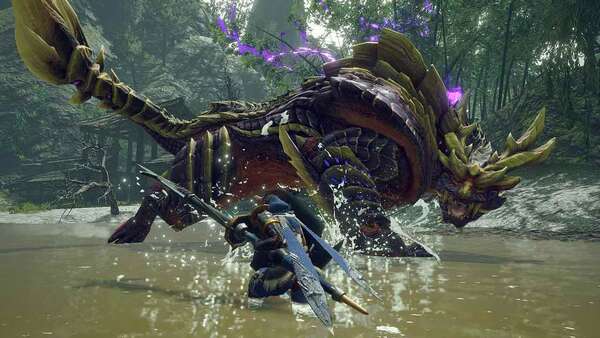 Switch Pro rumors are nothing new, as they've been floating around for a couple of years now. Every once in awhile they pick up steam, and that's exactly what happened with the reveal of Monster Hunter Rise.

Nintendo has paired Monster Hunter games with hardware revamps before, and some think that's exactly what Nintendo and Capcom have planned for Rise. That's in part due to history, and also because some found Monster Hunter Rise to be too impressive visually for the standard Switch.

In an interview with Eurogamer, Capcom's Ryōzō Tsujimoto is asked about the gameplay footage seen so far, and the potential for a Switch revamp. You can see his full response below.

(Monster Hunter Rise) was all running on Switch - everything you saw at TGS. ...obviously we have no idea whatsoever what the plans would be in that direction (a new/revamped Switch), but even at the moment you actually have two different Switch hardwares you're targeting - you've got the the original Switch which has the docking mode, so that's something we've already borne in mind to make sure that the game isn't making any undue assumptions on the hardware owned by the player. As to those kind of plans on Nintendo's side, we can't speak to those at all. We're trying to make the game work as best as it can on whichever Switch you have

Sure, let's all believe everything Nintendo says.

I don't find Monster Hunter Rise to be too impressive visually to be running on the standard Switch. But I do hope there is a Switch Pro releasing soon.

Nah this game is clearly pushing the hardware a decent chunk. Texture resolution could be higher but thats not going to massively affect GPU performance at all.

I would not be surprised if the footage really is just running on a standard Switch.

It sounds like Rise has been in development since roughly the Switch started. (I would suspect that's where Capcom's request for more RAM came from, and why Nintendo complied.)

If it's been in development that long targeting Switch from the start, then it doesn't seem that far-fetched the game manages to look better than the average Switch port, which are usually games originally coded for more powerful hardware before being "down-sampled" until they run well enough on switch.

If Nintendo already stated that they have no plans to make the Switch Pro, then there are no plans. Its that simple.

And there are already a ton of Switch games that look graphically impressive.

Sure, let's all believe everything Nintendo says.

I'm not saying to believe in it. I'm just saying it ain't gonna anytime soon. And really, there are so many games on the Switch that are graphically impressive.

Nintendo used to deny many things like the DS Lite, the DSi and the 3DS only to reveal them months if not weeks later. I'm just saying, take what they say with a huge grain of salt. After all, they want to control the narrative for their products and when they get announced like anybody else.

Wait...they denied reveal of DS series? That's news to me.

Yeah this was funny back in the day

On a side note what's with the lack of voice chat online? Monster hunter 3U had online voice chat for goodness sake. It's works perfectly fine on games like overwatch and fortnite.

They said it wouldn't be there ?

What a strange decision. Maybe they thought it did not work out for them in GU for some reason ? Even though I can't really see why that would be the case.

Even Tri had voice chat on the Wii. :P

I think I used it once or twice.

Yeah I bought the Wii speak just for tri. It was actually fun to use for me as I played with my brothers who lived about 15mins away from me so the connection was smooth and I got to joke around with all of them at once since it captured the whole room

Just like Sinders said, MH rise looks quite possible on the current switch, they have already stated that this is the RE engine and that they are targeting 30fps. Looks on par with games like Doom or Wolfenstein on the switch (haven't played any games that run on the RE engine), which also look really good and you also have to consider that the game is being developed with the switch as the main platform so it makes it easier for them to max out the looks of the game.
Anyway, there could be a switch pro in the future, who knows, but this game looks like it runs perfectly well on the current switch.