A bit more wind in the sails
by rawmeatcowboy
10 October 2020
GoNintendoGN Version 5.0 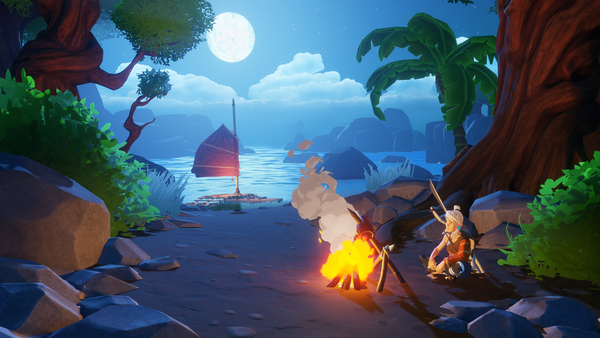 Windbound has been updated to Version 1.0.36649.221. It's a pretty hefty update, and you can see the full patch notes below.

Fixed items potentially being lost when exiting The Crossing while the player was not in control of the boat.
Added a fix to only allow saving if the player is grounded or on a boat.
Fixed issues where grass canoes were taking too much damage from coral.

Added a fix for creatures occasionally flying into the air upon death.
Fixed a navigation issue where creatures would occasionally freeze.
Fixed the occasional 2 second delay before Gorehorn reacts.
Tutorials

Added an option to review tutorials from the pause menu in game.
Added the option to disable tutorials.
Added sailing tutorial refresher prompts.

After finishing the game players can now continue in the same slot from Chapter 1 with all their blessings in a New Game+ mode. This mode does not replay the intro cut-scene.

We’ve added auto-saving as you acquire each Nautilus key.
We’ve also added an additional auto-save as you use the final Nautilus key before Kara enters The Crossing.
We already auto-saved when you successfully emerge from The Crossing and begin the next chapter, and this remains the case.

We’ve renamed Storyteller to Adventurer mode and updated the description of the difficulty modes to make the difference between the two modes clearer. This is in English first, but localised text will follow.

This is the classic Roguelike mode.
Only items in “Held” inventory slots are retained upon death
Boat is lost upon death.
Return to Chapter 1 upon death.
Standard combat difficulty.

Increased the backup stamina recharge rate by 25%.
Reduced time to recover from dodging when you have no stamina by 50%, so Kara should be able to get moving again in combat much quicker.

Fixed an intermittent crash in shadow culling.
There was a bug in the Gameplay Options menu that if you reset to default options it reverted difficulty to Survivalist as well. This has now been fixed.
Fixed instances where player progression was blocked climbing some towers.
didn’t give a fair chance at avoiding it, this has been fixed and coral is now visible from a further distance.
Fixed an issue where Koji Berries were sometimes not appearing in player inventory.
Fixed the Ancestors outfit not appearing wet after Kara has been in water.
Corrected a number of Achievement descriptions.
Fixed a bug with the Pro Skater achievement where sometimes it would not correctly trigger despite the boat catching air for longer than 2 seconds.
Removed an unintentional feature where F11 would toggle the UI off/on. Players accidentally did this and had no idea how to bring it back.
Fixed an issue where player settings were not always being properly being applied.
Added the TAB key to be the default crafting menu button, ~ key still works as well.
Improvements to game loading time.
Fixed potential memory leak when saving game.
Fixed issue where 2 held item slots contents could be lost on death if the player had the “Arms of Imakl” blessing.