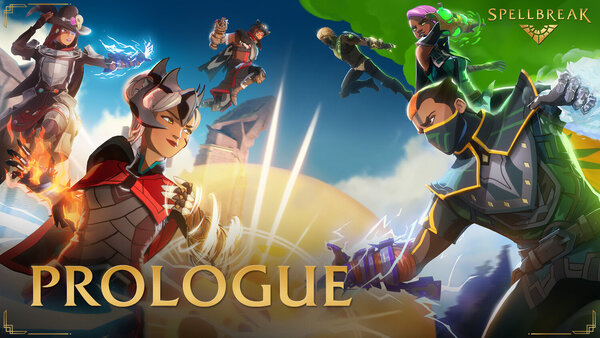 As we mentioned earlier, Spellbreak has now been updated with its "Prologue: Gathering Storm" update. There's a whole host of tweaks, changes, new content, and bug fixes mixed into this update. Most importantly, it also adds in gyro controls! Check out the full patch notes below.

Our first new game mode is here! Clash is a 9v9 team deathmatch mode where two teams race to exile enough of their opponents to reach a predetermined score. First one to make it, wins!
Clash is low on stress, but high on fun! It immediately thrusts people into combat and keeps them there for the duration. Great for learning new classes, blowing off steam, practicing, or just having good time!
Each side is made up of up to 3 squads of 3 players each.
Every time a player is exiled, the exiling team scores a point.
Players roam the map, gathering gear, and leveling their skills, just like in Battle Royale.
The circle will lead players to designer-placed areas that ensure good gameplay for both teams.
Upon being exiled, you keep all of your gear and levels but also drop a copy of your equipment that can be looted by other players.
After being exiled, you'll respawn near your team, high above the battlefield, with full health, armor, and 2 armor shards.
Of note: Spellbreak's game modes are not set in stone. We'll be experimenting and rotating the available modes over time. We want Spellbreak to grow and change and not be the same thing forever.
Per the above, with the introduction of Clash, we'll be disabling Duos.

This release marks the introduction of the Chapter system in Spellbreak! This is the first take and we’re going to be listening to your feedback and evolving it further as we go forward.
Earn reputation by completing missions for Avira Emberdane and unlock 25 levels of rewards, including exclusive:
Outfits, including an Epic one!
Cloudbursts and Afterglows
Titles and Cards
Gold!
Come back every week for new quests or level your reputation up by playing and earning XP as normal.
As a celebration of the Prologue, we're making it FREE for everyone!
Check out your progress in the Quests and Chapters tabs and see the story as it evolves over time.
For more about the Chapter system, take a look at this post.

It's time to get spooky with a bunch of new cosmetics arriving in the shop!
We've also added bundles so you can buy a set of items at the same time for a discounted price.
Matchmaking
We've made a change to how lobbies are filled to allow them to better populate with players.
Now, as more players join, the match countdown timer increases up to a certain point (though it's still capped at a few minutes) so that as long as new players are coming in, they'll be placed in an existing lobby instead of closing down the lobby and spawning a second one. Basically, we're trying to fill one game completely instead of making two half full games.

Bug fixes that deserve a callout
Fixed an issue with the Lighting Strikes sorcery not striking players in the outside edge of the sorcery.
Immediately jumping upon stepping in a puddle no longer prevents damage from correctly being applied.
Fixed a bug where shadow-stepping into a toxic cloud caused the dash component of Vanishing Mists to not trigger.
Talents

In this release, we're adding three brand new talents. They're unlocked for all players from day 1, so get in there and try them out, make new builds, and let us know what you think!

Vital stone’s immune effect now correctly protects against being pulled by a tornado.

Cost is now 1 (down from 2).
Its description now reads: "Chance to find Potions from Chests: +25% / Chance to find Scrolls from Chests: +50/75/100/150%"
Note: This description is slightly inaccurate. It increases the chance to find potions AND shards.
Finders Keepers* has struggled to find a place outside of very specific cases and we’ve wanted to buff it for a while now. With the changes to consumables, it seemed like a good time to expand its scope!

Cost is now 2 (down from 3).
Fortitude's been overshadowed by other Body talents and we want to make it more appealing by lowering its cost.

Cost is now 2 (up from 1).
Scav was always a great deal... Too great of a deal in fact, especially with the introduction of some of the new talents.

Cost is now 3 (up from 2).
Long the most dominant pick of any talent category, Fervor was too often a no-brainer for what it gave. This also indirectly lowers the power of some classes/skills as well.

Now reads: "Run Speed +3 / On Damage Taken: Run Speed +1/2/3/5 (5s)"
We've added a hefty chunk of base movement speed to Escapist and it's always on. Escapist is now for escaping, engaging, and just running around!

Now reads: "Consume speed 35/50/65/90% faster / Consumables replenish nearby teammates health and armor for 50% efficacy"
With the changes to consumables and more plans on the way, we needed to slow Thirsty down a bit as well as make it explicit that it only affects healing and armor. If we wanted to commit to it sharing ALL consumable effects at 50%, we'd likely have to rework it fairly significantly in the process.

After using a consumable, the player’s vitals bar shows how much they will heal over the duration of the consumable.
An oft requested feature. You'll now be able to see just how much you'll be healed as it's happening!
NEW SMALL HEALTH POTIONS AND SMALL ARMOR SHARDS.
“After drinking for 2 seconds, heals you for 15 health over 5 seconds.” / “After consuming for 2 seconds, gives you 15 armor over 5 seconds.”
These are Common rarity.
They stack up to 6 in a hot bar slot.
They drop in stacks of 2.
These are for quick top ups in combat and since they stack to 6, you can carry around a bunch of them. Since they’re common and come in pairs, you’ll also find lots of them.
These can be used very effectively in combat to give a quick jolt to your vitals.
The current “small” versions that you’re used to have been renamed, given a new rarity, and had their values tweaked up a smidge for better rounding, but are otherwise unchanged.

“After drinking for 3 seconds, heals you for 25 health over 10 seconds.” / “After consuming for 3 seconds, gives you 25 armor over 10 seconds.”
These are now Uncommon rarity.
They still stack up to 2.
We’re adding a new potion type called “Safeguard” that refills both health AND armor. These are primarily for out of combat regeneration but if you can find a longer window mid-fight, it’ll help you recover in a big way.

“After drinking for 5 seconds, gives you 25 health and armor over 10 seconds.”
These are Epic rarity.
They take up a hot bar slot but cannot be stacked.

“After drinking for 8 seconds, gives you 50 health and armor over 10 seconds.”
These are Legendary rarity.
They take up a hot bar slot but cannot be stacked.

“After drinking for 1 second, gives you 2 bonus charges to your Rune and your Sorceries.”
These are Epic rarity.
They take up a hot bar slot but cannot be stacked.

The main menu bar has been slightly re-ordered.
All players now start with the title "Breaker" by default.
Emotes now loop in the store and collections menus.
Artifacts now freeze if the player is frozen.
Frozen boulder has improved vfx and material.
New sounds added for when players use consumables.

Switch now supports gyro controls.
Hopefully fixed the black screen issue for real this time.
We're really sorry about this taking so long to fix!
Players with their system date set to before August 18 are now able to log in.
Just in case you need to be a time traveling island-hopper for some reason...

When servers are down for maintenance, the client now properly reports that instead of giving an authentication error.
When a player is exiled from a game and in a party with players still in the game, they are no longer incorrectly labeled as “in match” when they return to the lobby.
Fixed a bug causing the shop tab’s UI to become corrupted after idling on it for a long time.
If a player fails to enter correct account information, they'll now be taken back to the login screen.
The "Bored" emote now has the correct icon.
Parties will no longer be broken up due to network hiccups.
Fixed an issue causing users with controllers to be repeatedly prompted to press the confirm button through "Lost Password" flow even after confirming.
Users who exit out of the current match and ready up are now able to unready while party members are in game.
Fixed a bug causing some users to randomly disband from a party after a match concludes.
Sound FX of a canceled sorcery will no longer play twice.
Fixed a rare bug that prevented voice chat from being enabled.
Players can now see the login queue countdown when logging into Spellbreak with high server load.
Adjusted Nature's Bounty cloudburst color scheme to better match preview icon.
Fixed a bug causing unlocked Cards to appear squished when viewed from the rank up reward notification.
Exiled players no longer get interaction button hints.
As nice as it would be to drink that potion, it feels a little mean to taunt you.
Fixed a bug causing the cursor to lose focus when receiving a party invite on the party invites section of friends screen.
Sound FX for the menu and title screen, mana recharge, and mana depletion are now correctly affected by the sound effects volume slider.
Improved tracking on emote wheel when using a mouse.
Setting voice input volume to zero now correctly mutes teammates.
When one player leaves a party of two or more when all of their teammates are ready, the party no longer instantly joins a match.
Fixed a number of typos.
These were the source of deep shame!
Fixed a number of untranslated strings.
Fixed a bug causing the spectate camera to focus on the lobby map instead of another player when the spectate button is pressed immediately after being exiled.
Fixed an issue causing lag when getting exiled.
Fixed a bug causing the incorrect class icon to appear next to unlocked skill up on Mage Rank up.
And of course, fixed a whole bunch of miscellaneous crashes.