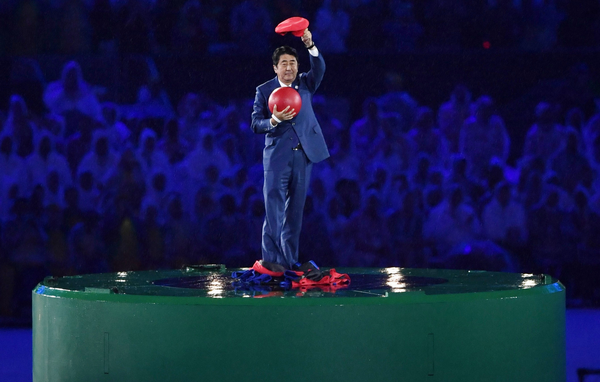 Back in 2016, former Japanese Prime Minister Shinzo Abe took the stage at the Rio Olympics closing ceremony to promote the Tokyo 2020 Olympics. Abe appeared out of a Mario warp pipe while wearing a Mario hat, which was a pretty great moment for Nintendo fans. Unfortunately, it seems Abe wasn't too keen on the idea. He shared his thoughts recently in an interview with Nikkan Sports.

“To be honest, I wasn’t thrilled when [Tokyo 2020] President [Yoshiro] Mori first told me about it. Initially, I wondered if it were okay for the Prime Minister to take on the appearance of Mario, but the Olympics wanted to get rid of political overtones as much as possible. I waited for over ten minutes in that pipe. (laughs)”

While Abe wasn't too into the idea, he was a good enough sport to do the job, and it sounds like he can look back on it and laugh now. It certainly made for a moment many won't forget!

Nah, more like he wasn't sure the prime minister was good enough material to do The Mario, he surely thought, you need at least emperor of Japan level to do it.

"I waited for over ten minutes in that pipe."

That’s what happens when you don’t use a real warp pipe.

I completely forgot the Olympics were supposed to happen this year.