GRIP: Combat Racing is currently 80% off on the Switch eShop 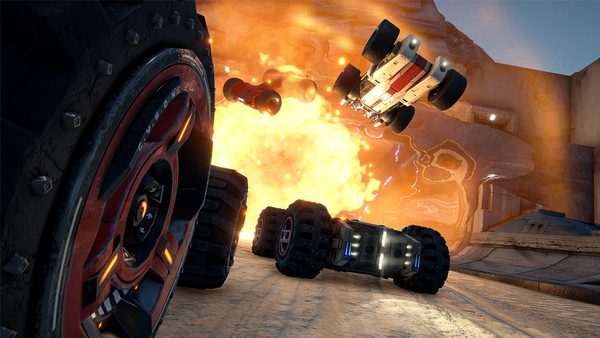 GRIP: Combat Racing is usually priced at $40, but there's a major deal going on on the Switch eShop. For a limited time, you can grab the game for just $8. This is a whopping 80% off the normal price! This deal is being offered in Europe as well. If you're still not convinced you should grab the game, you can read all about it below.

Harnessing gravity defying physics alongside a bristling arsenal of outlandish weapons, GRIP delivers the fastest, most competitive racing experience ever. Scale walls, ceilings and anything else you can get your tyres on to... as you master tantalising tracks, tricks and perform mind-blowing stunts to race your way across the cosmos.

• Battle it out with online or offline Team Modes!
• Hit speeds of up to 767mph on floors, walls and ceilings
• Race your way through 29 tracks across a host of 4 exotic planets
• Pick-up 9 power-ups and weapons, from shields and turbos, to missiles and explosive darts.
• Compete with offline split screen and online multiplayer
• Face off alone or team up in 5 Arena battle maps
• Beat the clock in 19 point-to-point Carkour runs.
• Single player campaign included
• Roster of 30 armoured cars to suit your style

HOT UPDATE!! GRIP NOW INCLUDES ANTI-GRAV VEHICLES! Choose your ride and dominate the track as heavily armoured rollers race against the futuristic airblades for the first time ever, in GRIP - THE ULTIMATE COMBAT RACER!