Zeboyd Games has announced that Cthulhu Saves Christmas is coming to the Switch eShop on October 28th, 2020. This version of the game will include a “New Game+” mode that's unlocked after clearing the game, which includes new story scenes and more difficult enemies. 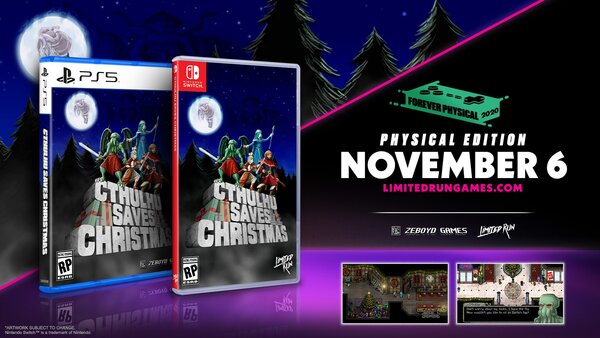 For those who want a physical version, Limited Edition Games will be opening pre-orders for a retail release on November 6th, 2020. You can see the packaging for that release above.

Finally, if you'd like to learn more about what Cthulhu Saves Christmas is all about, you can check a complete rundown below.

The master of insanity, Cthulhu, has lost his powers (again!?) and the only way he can get them back is by rescuing Santa Claus from the League of Christmas Evil in this prequel to Cthulhu Saves the World!

Join Cthulhu, the Snow Maiden, Baba Yaga-chan, and Belsnickel as they build R’lyehtionships, fight the League of Christmas Evil, and catch the Christmas spirit! Fhtagn!

Fight the Krampus, Mari Lwyd, and other Christmas League of Evil villains in unique, turn-based combat!
Insanify your enemies!
Build your R’lyehtionship levels with friends and foes in the super-streamlined life sim segments!
Tentacles!
Multi-character abilities!
More chickens than you would expect in a Christmas game.
Pacing that doesn’t waste your time!
Fun for the whole family!

Estimated time for single playthrough on medium difficulty: around four to five hours depending on playstyle.