Re:ZERO -Starting Life in Another World- The Prophecy of the Throne pre-order info and English voice cast revealed

All the juicy details
04 December, 2020 by rawmeatcowboy | Comments: 1

Spike Chunsoft has released some new details on the upcoming Re:ZERO -Starting Life in Another World- The Prophecy of the Throne. Today brings us a new trailer, pre-order info, a discount offer, and the reveal of the voice cast. Check out all those details in the press release below.

Spike Chunsoft, Inc. has released a character trailer for Re:ZERO -Starting Life in Another World- The Prophecy of the Throne today. The character trailer reveals digital pre-order information as well as the English voice cast for the new characters.

Nintendo eShop pages are currently live for this title in some regions. However, a 10% pre-purchase discount is currently being arranged and will be announced to fans via Spike Chunsoft, Inc. official social media channels. Please wait to pre-purchase until the discount has been applied if you would like the 10% off.

The English dub cast of the Re:ZERO -Starting Life in Another World- anime will return to reprise their roles! English voices will be available as a Day One patch for the North American and European versions. 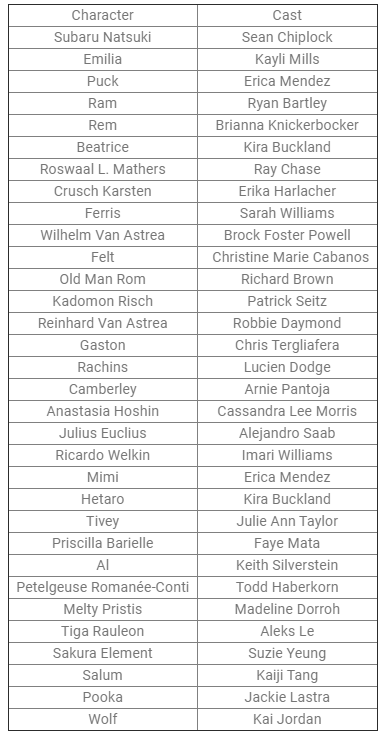 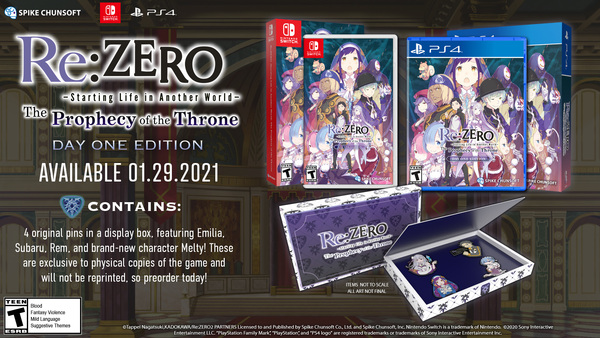 The Day One Edition includes 4 exclusive, limited run only original pins in a display box, featuring Emilia, Subaru, Rem, and brand-new character Melty! These are exclusive to physical copies of the game and will not be reprinted, so preorder today! 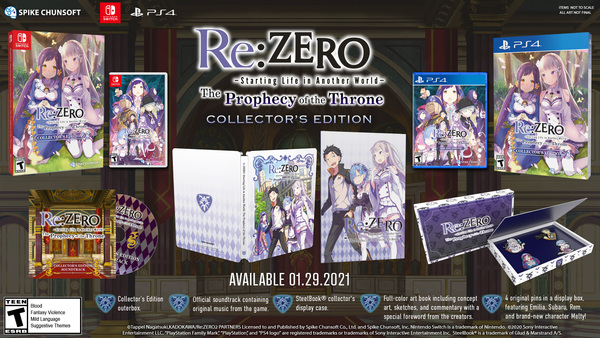 The Collector’s Edition includes 4 exclusive, limited run only original pins in a display box, featuring Emilia, Subaru, Rem, and a brand-new character Melty, a full-color art book including concept art, sketches, and commentary with a special foreword from the creators, a SteelBook® collector's display case, the official soundtrack containing original music from the game, and the Collector's Edition outerbox!