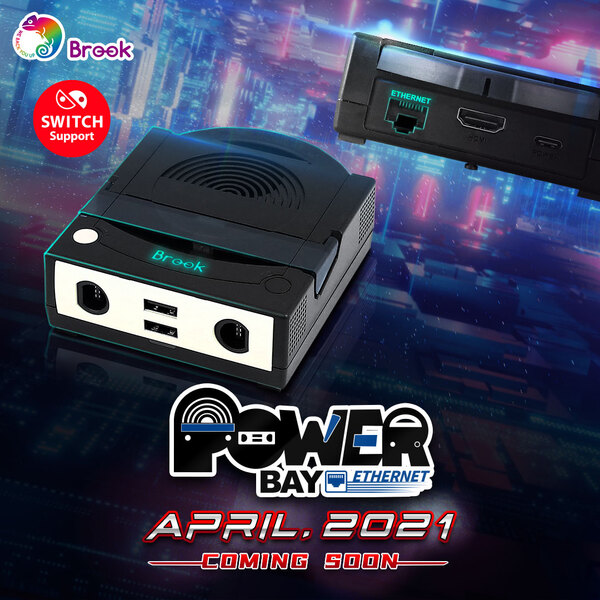 Brook Gaming has already released one version of their PowerBay Switch dock, which allows users to plug in two GameCube controllers, along with two USB items. The dock ended up being a hit, and now Brook Gaming is giving their product a bit of a makeover.

The PowerBay Ethernet is set to release in April 2021, and the big change is the Ethernet port now added to the dock. For Smash Bros. Ultimate players, having a way to use a GameCube controller and play via wired internet all in one should be quite handy. You can read full details on the dock below.

Met with anticipation around the globe, Brook Gaming’s PowerBay Ethernet – A multipurpose Switch dock with Ethernet ports – is predicted to hit the market in April 2021. As a home environment projector device which allows Switch players to play together on a wider screen, Brook Gaming’s Powerbay offers stable connection and eliminates the issue with slow, unstable wireless internet, offering a more perfect gaming experience by preventing lagging or disconnections. Just you wait!

- Allowing players to use combos and custom button functions in-game, giving them an unlimited number of choices.

This looks pretty cool, might have to pick one up.

I do wish the default Switch dock had Ethernet. I’d use it at least for downloading. Downloading games on Switch over WiFi is slow compared to what the WiFi protocol should be capable of. I have 150Mbps internet but when downloading on Switch it pretty much maxes out at 25Mbps. Even the “speed test” fails to climb higher.