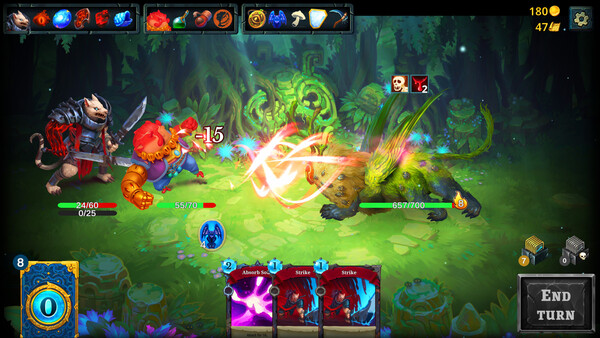 Roguebook was a Kickstarter project that secured funding for Switch awhile ago, and development has been moving right along ever since. That said, we'll be waiting quite awhile to get hands-on with this one.

While we don't have an official release date for Switch yet, we do know that the PC version is launching in June 2021. A press release today confirmed that the Switch version will come after that date. Let's just hope the game manages to hit Switch before the year closes out.

While we wait for more release date info, you can read through the official description below to see what Roguebook is all about.

Developed by Abrakam Entertainment, the developers of Faeria, and co-designed by Richard Garfield, the creator of Magic: The Gathering™, Roguebook takes place in the enchanted world of Faeria. In the game, players choose 2 heroes amongst the 4 available and form a team to take on the legends of the Roguebook, a cursed book whose existence threatens all living creatures.

In Roguebook, adventurers on an almost blank map. They progress by revealing new tiles they can move to, using an ingenious inkwell system. The Roguebook changes with each run, so the obstacles encountered are different from one game to the next. Same goes for the enemies you must defeat in tactical turn-based battle.

As in a traditional deckbuilder, players collect cards that they can use in the different challenges. You can upgrade the cards by inserting gems to earn unique bonuses. In addition to these cards, players can create dazzling team synergies using each hero's specific abilities. These abilities are found in a skill tree, and can be unlocked through a disruptive mechanism: the Tower Deck.

Unlike other games where the most frequent strategies is streamlining your deck, Roguebook encourages players to build a deck using as many cards as possible in order to increase the team's offensive and defensive capabilities. With a meticulous strategy, wise moves and a little bit of luck, players can create an invincible heroic duo!