Cadence of Hyrule updated to Version 1.5.0 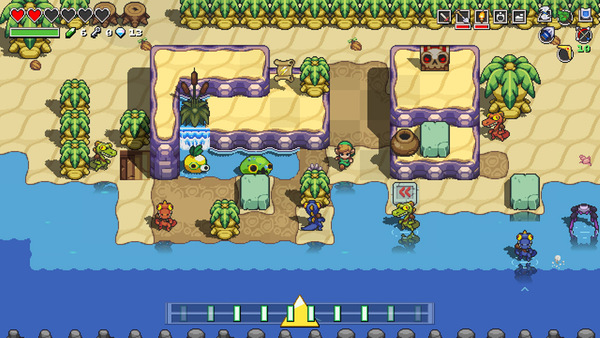 Cadence of Hyrule has been updated to Version 1.5.0. Check out the full patch notes for this update below.

Added a new page of save files, for a total of 6
Added a “random” option to the soundtrack select screen
Wipe the leaderboards

The player is prevented from changing state when picking up an item while holding out a spear or longsword (for Spearmaster achievement)
Changed to center the camera on the player after Impa uses her teleport ability
Changed to prevent all damage to the player on the beat they use a healing item (direct or indirect use)
Added an extra beat where Aria cannot be killed by another missed beat immediately after taking damage from a missed beat and being saved by a fairy/potion
Remove some useless items from Aria’s item pool: Ring of Regeneration, Ring of Protection, Battle Torch, Greaves
Changed Scroll of Need to allow it to give Aria/Yves a fairy when they have an empty bottle
Changed Wizzroboe to make the rapid-swipe attack less punishing when the player is playing as Aria
Removed Ring of Stealth from Arena Mode
Changed Ring of Stealth aggro radius from 3 to 4
Changed Boots of Leaping to wear out more quickly, and ensure the player can have this item at most once per game
Changed frozen/stunned statuses to allow the player to keep the beat
Added some guaranteed heart drops in Deku Village