Nintendo, Activision, and the Tony Hawk game accounts on Twitter are talking to each other, leaving fans wondering what's up 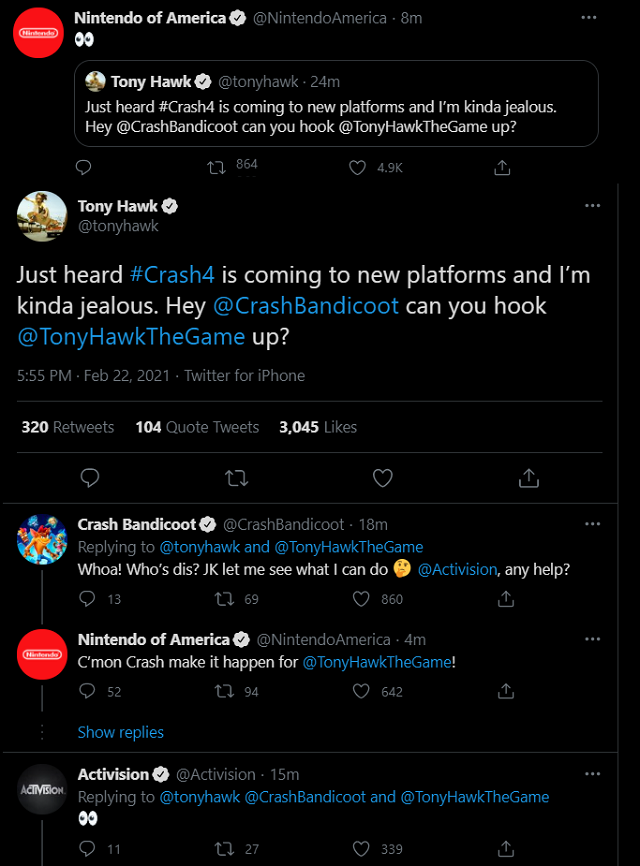 Something is going down with Nintendo and Activision. As you can see in the series of tweets above, Nintendo got in on a conversation with Tony Hawk's gaming Twitter account, and the Crash Bandicoot account. While it's never outright stated, it seems like the Tony Hawk tweet is about bringing Tony Hawk's Pro Skater 1 and 2 to other platforms.

This series of tweets is interesting for a number of reasons. As you know, Crash Bandicoot 4: It's About Time was just announced for Switch and other platforms, after releasing on PS4 and Xbox One back in Oct. 2020. Tony Hawk's Pro Skater 1 and 2 is available on PS4 and Xbox One as well, and Switch owners have been wondering if the game had any chance at coming our way. This tweet certainly makes it seem like something's up, especially with Nintendo's retweets/replies. Nintendo hardly ever replies to tweets on their account, so if they're going out of their way to tweet here, you can bet this is organized with Activsion.

Seems like it'll be just a matter of time before Tony Hawk's Pro Skater 1 and 2 is announced for Switch. Cross your fingers for info soon!

Thanks to Dondom95 for the heads up!
Submitted by: dondom95
Source: Link
Rating: 4

Maybe Tony Hawk will be the next Smash DLC character.

I wonder if the Tweagle will turn up for this one?

Should we place our bets now?

Dont forget the drm to.

They did that about MLB the show but in the end the game couldn't even run on the switch and they skipped the platform, lol. I wouldn't read too much into this even though I feel this is a bit more likely as a late port if they time it with next gen versions akin to Crash 4.

If it is indeed happening, it just seems silly not to have announced both at the direct, with everybody's attention on them...

Maybe Tony Hawk will be the next Smash DLC character.

They announced Crash Trilogy, Spyro Trilogy and Crash 4 later on Switch than on PS4, after initially saying that there were no plans for the Switch. So why would Tony Hawk be any different.