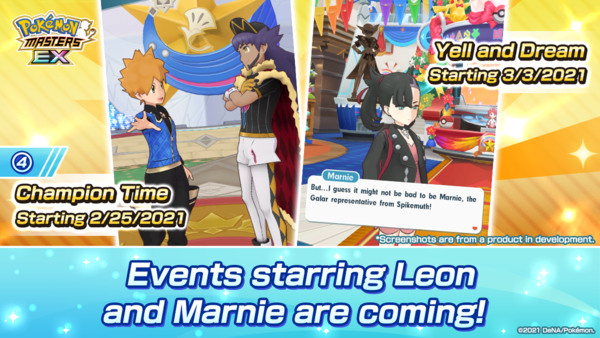 Pokemon Masters EX just keeps getting bigger and better. A whole new wave of Sync Pairs are on the way, and you can read all the info on who's included in the press release below.

DeNA Co., Ltd., in partnership with The Pokémon Company, has announced that sync pairs Leon & Charizard, Marnie & Morpeko, Champion Iris & Hydreigon, and Diantha & Gardevoir will be arriving soon in Pokémon Masters EX. With these additions, the island of Pasio will have had Champions from every region of the Pokémon world arrive on its shores.

Leon, the Champion of the Galar region, and his partner Pokémon Charizard, will be the first master sync pair added to the game. Master sync pairs possess a passive skill that provides a boost to the whole team. Marnie & Morpeko, also hailing from the Galar region, can deploy moves with culinary themes like Full Belly Mode and Hangry Mode. Both of these will be available in the sync pair spotlight scout from February 25th at 10:00 p.m. Pacific Time until March 17th at 10:59 p.m. Pacific Time.

A re-tweet rally is also being held, in which if enough players re-tweet the trailer on the game’s official Japanese Twitter (@pokemas_game) and English Twitter (@PokemonMasters) pages before March 2nd at 9:59 p.m. Pacific Time, 3,000 Gems and 60 5★-Guaranteed Scout Tickets (enough to use the 5★-Guaranteed Scout two times) will be distributed to all players.

Pokémon Masters EX will also soon be celebrating one and a half years since the game’s launch and will be providing players with the opportunity to earn up to 10,000 Gems, enough to add up to 36 sync pairs to players’ teams, via multiple log-in bonuses that will be held from February 25th at 10:00 p.m. Pacific Time until March 30th at 10:59 p.m. Pacific Time.

Players can check the in-game menus for more information. Note that in-game event dates are subject to change without notice.