Wii U firmware updated to Version 5.5.5 U 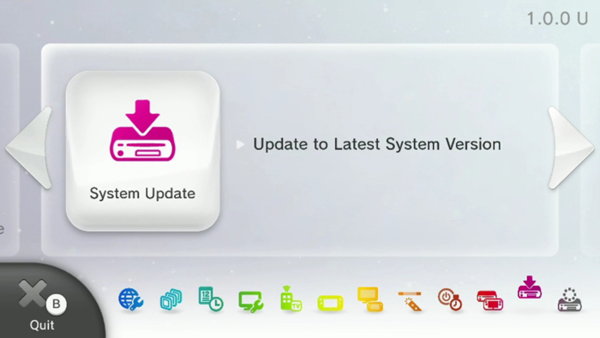 Believe it or not, the Wii U has gotten a firmware update. The system is now running Version 5.5.5 U, and you can get full details on this update below.

Improvements to system stability and usability

Further improvements to overall system stability and other minor adjustments have been made to enhance the user experience.

I know a lot of people disregard the Wii U, but I really miss Miiverse

It must be the March 31st update that deletes all the Mario content on Wii U.

It was a joke. Although Nintendo has taken Wii U games out of the Wii U's E-shop.

Inevitably at some point they'll close that service.

Followed by 1st April, where they admit everything they've done to Wii U owners has been a cruel prank. They'll start reselling the Wii U, reinstate Miiverse, update the original Wii U games that had gotten Switch ports with slight enhancements, etc. And they'll say, Wii gotcha, the Switch IS the Wii U in disguise, just made portable.

You know, Nintendo say they want the Switch to last 8 years at least. The Wii U is that age now, just think about that, all that it entails and what us, Wii U owners endured compared to now.

Like imagine if Nintendo announced that all Switch production would cease in say, May, and that most of the original Switch games will be ported to the next system at full price. Or that you would have to wait until the system after that to get a sequel to Super Smash Bros Ultimate(which itself isn't wholly original). That would only be the very tip of the iceberg of how Switch owners could begin to understand how Wii U owners feel.

The WiiU is a great system but with too many funcionalities. What should Nintendo focus on and advertise: off TV play, dual screen play or assymmetric multiplayer? Not even they knew, and one functionality prevented the other: if the game is dual screen or multiplayer, cannot be played off TV. So on Switch they decided to focus on single screen gameplay and off TV play.

Nevertheless, despite the clumsy but great hardware, we got fantastic games that even Nintendo themselves have failed to best. And remember Breath of the Wild is originally a WiiU game.

I love the Switch, except for the Joy con drift, but remove the WiiU ports and the first party lineup is great but lacking.

I’m all for ports on Switch because of how much value I see in just having games on a portable but not at the expense of brand new games. Unfortunately I think that’s exactly the cost of certain ports we’ve had on Switch so far. We should have had a full blown Mario Kart 9 by now and I’ve no doubt that game has been in production but with the immense success of MK8 Deluxe and the fact that it just keeps selling so well they’ve surely pushed back immediate plans for MK9- fully possible we won’t even see it on the current iteration of Switch. Why bother when the old one keeps selling so well?

Games like Pikmin 3 Deluxe too- I’m happy it’s on Switch but surely by now we should have gotten a fourth game? I know ports don’t necessarily mean taking away resources from new games especially when different teams are responsible for the ports themselves but at the very least let us know that true sequels are coming, like they did with the Bayonetta ports and announcement of the third game at the same time. As a Wii U owner during that generation it’s frustrating at times to be seeing so much of the stuff I’ve already played with no sign that more original games in those franchises are coming. I’ll hand it to them that their more recent ports are offering decent bonuses for those of us who’ve played them before like Bowser’s Fury but it’s not consistent across them (I didn’t think the Pikmin 3 Deluxe extras were of the same value as 3D World’s for example and games like Tropical Freeze offered virtually nothing extra at all).

I know they’re a business at the end of the day and they don’t owe any of us who supported the Wii U anything. If they can repackage old stuff and make a killing doing so then they’ll do it and it doesn’t really matter to them if a minority of Switch fans have seen it all before. Can’t deny it’s a bit of a letdown though to not be seeing more new stuff, especially when their original Switch games have been so stellar. Hopefully all new stuff becomes more commonplace now that the majority of Wii U’s best games have made the shift.

I love the Switch, except for the Joy con drift, but remove the WiiU ports and the first party lineup is great but lacking

Easiest thing in the world to repair and you don't even ahve to open it!

How do I repare it? Seriously I don't know how to.

This guy explains it in a video so I don't have to in text here. The difference is that I used that "electronic cleaner" spray. I just put the little tube under the rubber (you see it in the video) and sprayed a bit here and there.

Mind you: This can go against your warranty somehow!

I will try this method. Thank you!

Least of my problems to share =) Please tell me if it worked or not! =) Very curious!

To me it's been funny. The Switch has been one of the best Nintendo consoles in regards to third party, thanks to the huge number of smaller and indie developed games it has gotten. The Switch has a few first party highlights, but most of their big games have come from Wii U.

I have only bought those I skipped like Hyrule Warriors which combined the content of both Wii U and 3DS.

I think this generation Nintendo's focus has been on branching out. Their mobile initiative, their amusement park, their toys, collectibles and merchandizing their IP. Odd projects like Labo, Ring Fit Adventure, etc.

New big games with high budgets are few and far between.

In regards to the Wii U, as of now, I've still used it for stuff the Switch hasn't gotten yet. Wii, GBA, N64, DS, and unofficially Gamecube games.

If anything that's the stuff Wii U still retains.

And Star Fox Zero, because we likely will not get a new Star Fox on the foreseeable future.

As someone who bought a Wii U at launch and still owns said Wii U, and is also a Switch owner, you're being awfully hyperbolic. The Wii U was a sinking ship that was bleeding money, it's a good thing they cut ties with it when they did.

I know a lot of people disregard the Wii U, but I really miss Miiverse

Only people who lived through it know.

I do miss browsing the drawings. It's something that still isn't that common in forums or discord groups.

I just got done with 3D World on Switch and it just wasn’t the same without it. 😩

Dude same. It was so weird to finish levels and not see the miiverse posts

True story! It was something very special. The entire Wii U was truly special. And the games taht used it's features are also very special. I promise on the grave of my parents that if I win the lottery (or get rich in any other way) I'll get a team and develop a Wii U exclusive game using everything the Gampad has to offer!

Looking forward to this game

And since you'll be rich, I also look forward to my physical copy as a gift ;P


You wrote all that word vomit and missed out on Wii got U...

Followed by 1st April, where they admit everything they've done to Wii U owners has been a cruel prank.


That would be apt for (April) Fools still clutching their Wii U pearls.

just think about that, all that it entails and what us, Wii U owners endured compared to now.


I’m a double Wii U owner, I endured fantastic games on mediocre hardware. Then I moved on to fantastic new games on fantastic hardware.


The only thing unoriginal are your comments. Nor is even your precious Wii U. It’s the least original hardware Nintendo ever made.

It’s the least original hardware Nintendo ever made.

Calm down now! It's a very different/original idea in many ways. Too bad many devs didn't use it enough! =/

Guess I better boot mine up to get this update!