You don’t need a license to drive a sandwich (Patty Wagon not included)
by nintendojam
27 October 2020
GoNintendoGN Version 5.0 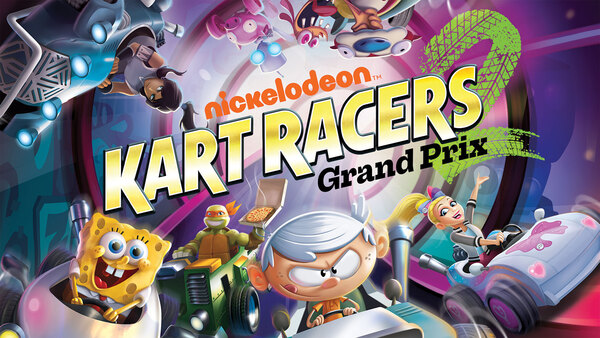 The first Nickelodeon Kart Racers from publisher GameMill Entertainment was released for Switch back in 2018, but the critical reception definitely wasn’t something to write home about. Receiving a 41/100 average score on Metacritic, I can’t honestly say that I had super high hopes for the sequel. Growing up with NickToons and having not played the original, I was nonetheless optimistically excited to put the pedal to the metal in the latest iteration, and the final verdict might actually surprise you. Despite some confusing developmental choices (likely due to a limited budget) Nickelodeon Kart Racers 2: Grand Prix is a solid and fun multiplayer kart racer for virtually everyone, and packs a nice nostalgic punch for 90s kids.

A total of 30 Nickelodeon characters are playable, including those from; SpongeBob SquarePants, Rugrats, Invader Zim, Rocko’s Modern Life, Hey Arnold, Ren & Stimpy, Avatar the Last Airbender, CatDog, Danny Phantom, The Loud House, and Teenage Mutant Ninja Turtles. It’s a great roster representing Nick old and new, but there is one racer that stands out amongst the rest. JoJo Siwa signed with Nickelodeon in 2017, and technically has her own cartoon “The JoJo and BowBow Show Show”, but she’s first and foremost a real-world dancer. It almost feels like if Nintendo put Goku in Super Smash Brothers. Sure they have history with the company, but they don’t originate from the same form of media as all the other characters. The absence of Timmy Turner (The Fairly Odd Parents), Jimmy Neutron, Daggett and Norbert (The Angry Beavers) and The Wild Thornberrys immediately stood out to me, but I’m probably just being salty. 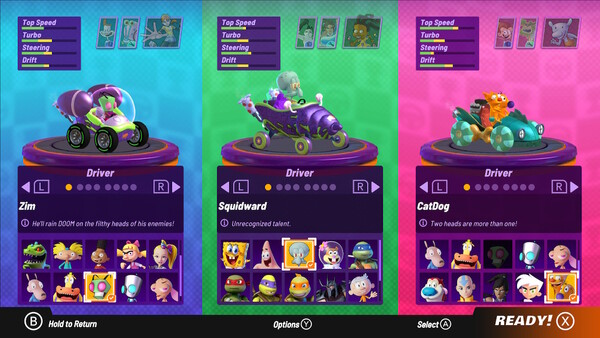 One thing that sets Nickelodeon Kart Racers 2: Grand Prix apart from other games of the same genre is the unique “Pit Crew” mechanic. 70 characters that didn’t quite make the cut to be full-fledged racers can still support you on the tracks. Selectable before the start of every race are two “Crew Engineers” and one “Chief”. Crew Engineers each provide passive abilities within the categories of defense, attack, or support, while Chiefs equip you with your powerful special skill. Filling your slime meter during a race by driving through the green goop spread across the tracks, performing jumps/tricks, or collecting Slime Tokens, allows you to perform this ability to give yourself a short-lasting yet immediate advantage.

Interchangeable kart parts allow for adjustment to your character’s Top Speed, Turbo, Steering, and Drift. Additional engines, wheels, and exhaust pipes, alongside custom paint jobs (which are purely cosmetic), can be purchased using the Slime Tokens you’ve collected during your races. Every character has a designated core vehicle, and can not be swapped out. This is probably the most annoying and confusing aspect of the entire game. Why can’t I drive around as SpongeBob in Zim’s Voot Runner or as Tommy Pickles in Sandy’s rocket ship? 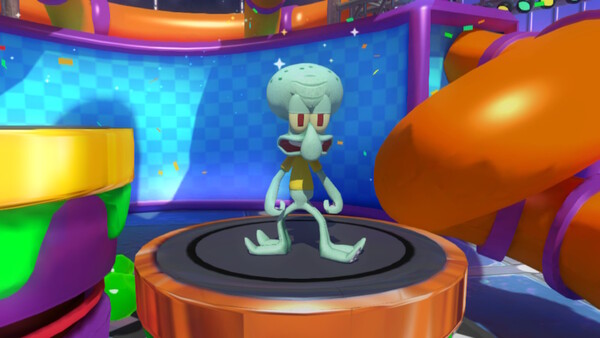 Gameplay consists of steering, drifting, using items, and performing trick jumps for a boost, all of which, control and feel absolutely wonderful. Everything is fluid, fast, responsive, and features almost everything you could ask from a kart racing game. Using ZR for acceleration (auto-acceleration can be turned on/off from the pause menu), ZL for drifting and trick jumps, B to throw items (forward or backwards using the C-stick or D-pad), X to use your Chief Skill, A for a rear-view camera, and Y to break, is very comfortable with every Nintendo Switch controller variation. The optional motion-controls aren’t at all finicky like I expected, and it’s actually a perfectly valid way to race (if you’re into that sort of thing). All of the 28 race-track courses are unique, enjoyable, and bursting with creativity and inspiration from Nick cartoons.

After playing just one or two races, you may immediately feel as though something is slightly off. While gameplay is as smooth as slime and as fluid as bubble solution, lack of voice acting makes all of the racers feel quite lifeless. SpongeBob doesn't laugh, GIR doesn't scream, Reptar doesn't even roar, and it removes a huge part of what normally gives these characters their charming personality. Stiff animations don't help either, and these elements take away some of the soul from the cartoon mascots we all know and love.

In terms of sound design, music in Nickelodeon Kart Racers 2 is also an important element that must be discussed. The soundtrack is filled with unique compositions to accompany each of the courses, all reminiscent of the style of music from the cartoon the stage is based on. To be perfectly honest, they almost sound like royalty-free versions of songs from the respective shows. Still providing a Nickelodeon vibe with original catchy and upbeat earworms, remixes of some official tracks would have definitely been a nice inclusion. I would have loved to race to something along the lines of SiIvagunner's rendition of "Grass Skirt Chase" from SpongeBob. 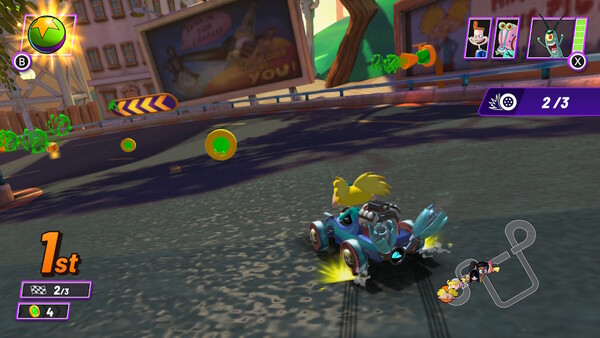 Kart-racers are obviously best played with friends and/or family, but if you're interested in the game's single-player offerings, you can 100% unlock everything in about 10 hours of gameplay. I had an absolute blast playing through the Grand Prix cups, completing all the various challenges riddled with predetermined win-conditions, and racing the Time Trial ghosts for each of the available tracks. Details on each of these modes can be found below.

Slime Grand Prix (Single Player and Multiplayer)
There are 7 cups available in Grand Prix mode (plus a bonus “Super Slime Cup” that rehashes previous races), each containing 4 tracks, making for a total of 28 original courses. Competing against seven other racers around three laps in traditional point-based tournament style, you earn up to 3 stars for each cup depending on your final score. Difficulty options include; Slow, Medium, and Fast, and they all must be perfected in order to reach 100% completion.
Challenges (Single Player)
This mode includes 6 sets of 7 challenges, each with a specific win-condition. For example; “Everyone is Squidward! Win this race full of cephalopods” and “Beat the time limit. Collect clocks to get more time” are two of the challenges you’ll partake in. The final challenge in each set of challenges (I’m saying “challenges” a lot… It’s starting to not sound like a word...) is a “Boss Battle” race, allowing you to unlock a unique playable character if you defeat them.
Time Trial (Single Player)
Exactly what you’d expect, Time Trial mode allows you to race against a ghost character to defeat their time around the 28 available tracks, three laps each. You can turn the ghost off and do a “Solo Race” if you’re wanting to practice or try to beat your own personal record.

Those three modes are used to unlock all of the characters, kart parts, and pit crew members. Almost all of the races are a bit on the easier side, since, well, it's a Nickelodeon game mostly intended for children. Grand Prix is the only main mode with selectable difficulty, but even the fastest speed isn't challenging enough for those experienced in the kart-racing genre. If you want to make things the hardest for yourself, there is always the option for "Fast" speed and "Expert" CPU while participating in a Free Race. For the casual video game player, difficulty won't be an overall issue, but for someone with 170 hours in Mario Kart 8 Deluxe like myself, you might feel as though you walked away victorious a smidgen too easily. Funnily enough, since I was pretty consistently in 1st place, there were items I didn't even know were obtainable in the game until I tested out the local-multiplayer modes 10 hours into my review. 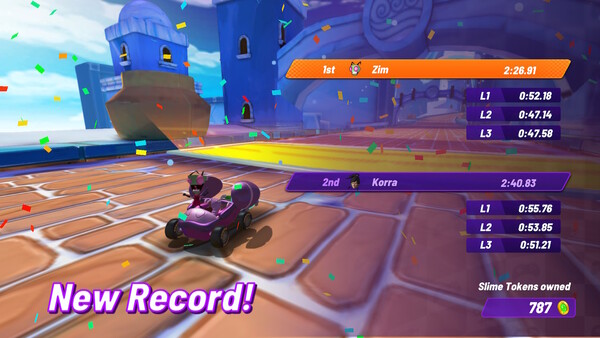 Free Race (Single Player and Multiplayer)
This is your fully customizable mode, allowing you to race freely to your heart’s content. Apart from being able to choose specific tracks within a cup, options for this mode include; Game Speed (slow, medium, fast), CPU Difficulty (easy, medium, hard, expert), Pit Crew (all hands on deck, chief only, none), Laps (3, 5, 7), and Items (normal, madness, none). There isn’t a way to turn the CPU off, and you’ll always have 8 simultaneous total racers.
Arena (Single Player and Multiplayer)
Although it’s pretty bare-bones, it was nice to see that Nickelodeon Kart Racers 2 featured a battle mode. Arenas based on the Kids’ Choice Awards and Double Dare studios are disappointingly the only two stages available, but they are still fun to drive around and throw items at each other within. “Free-for-All Battle” and “Control the Golden Spatula” are the two different modes, which are comparable to Mario Kart 8 Deluxe’s “Balloon Battle” and “Shine Thief” respectively.
Online Mode (Single Player / Online Multiplayer)
Matchmaking either doesn’t work, or no one is ever playing online. There is also an option to connect directly with friends, but I don’t personally know anyone that owns the game. So… it’s definitely an option present that was entirely missing from the first Nickelodeon Kart Racers, but I’m not able to actually review how functional it is. 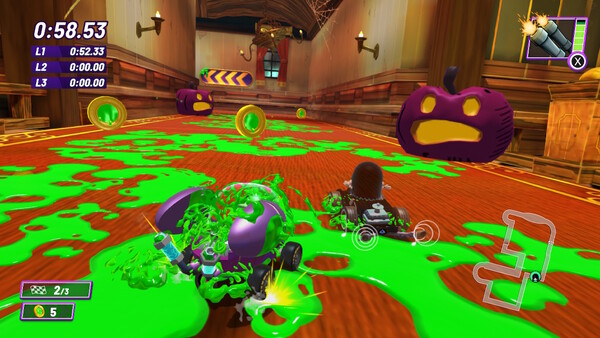 Graphics aren't exactly something the intended audience for this game will really care about, as the average 11 year old likely won't care how many gigaflops each pixel has (the answer is zero). However, the visuals are indeed passable, and sometimes I'd even consider them beautiful. Blurriness is occasionally obvious in background elements, but the art-style provides a colorful Nickelodeon feel that's pleasing to the eyes and brain. Frame-rate is mostly smooth, with some hiccups only noticeable while a lot is happening on screen at once. 2-4 player split-screen doesn't compromise frame-rate to any noticeable amount, and I never once felt my experience hindered by any of the game's technical aspects. Even the load times are super snappy.

Nickelodeon Kart Racers 2: Grand Prix provides fast-paced entertainment for Nickelodeon fans, both young and old. An excellent multiplayer party game held back mostly by a lacking budget, I highly recommend engaging in the antics of this licensed hidden-gem. It's definitely no Mario Kart, but it doesn't feel like it's trying to be either. $39.99 admittedly feels slightly steep, but you likely won't regret your purchase if you wait until the next eShop sale.