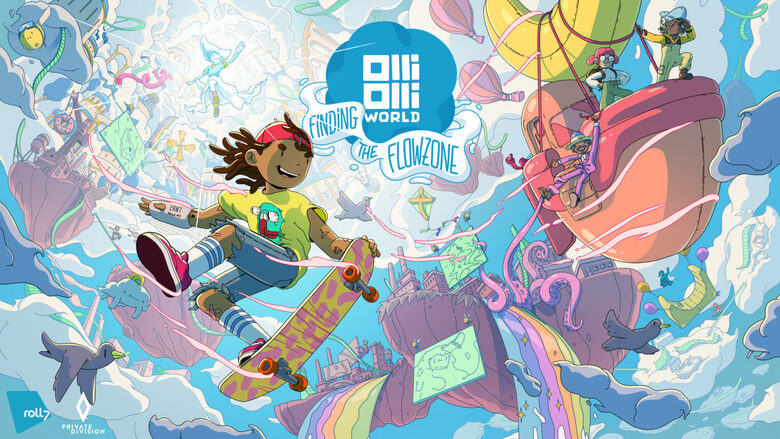 Earlier this month, Private Division and Roll7 released Finding the Flowzone, the second and last DLC expansion for OlliOlli World. This excellent expansion takes players to the Flowzone Layer, a world in the clouds filled with new characters, challenges, and a new way to skate on the wind as you search for the hidden city of Radlantis.

Like the V.O.I.D. Riders expansion, you unlock this DLC by playing a new level in an existing District – in this case, Sunshine Valley. There you sync up with your regular crew and the Skate Wizard, who all teach you how to skate through the wind zones to catch more air. As Gnarly Mike puts it, “You just get in a wind zone and it’ll push you in the direction it’s blowing.” 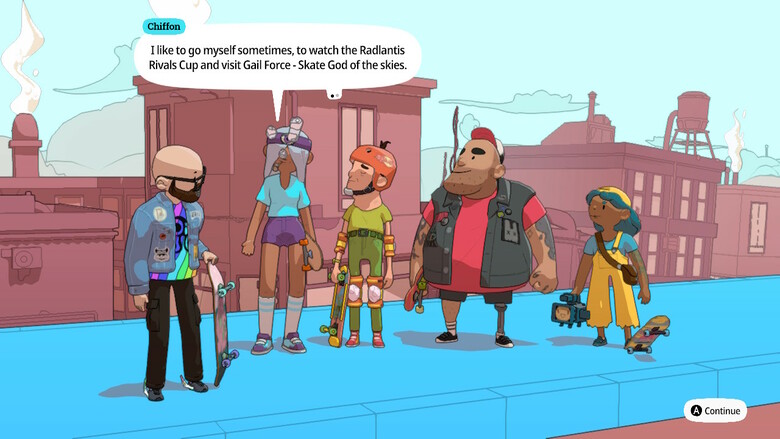 But riding these wind zones is so much more than getting an extra speed boost (and you do get quite the speed boost); you can also skate into wind streams that are blowing against you, which turn you around to skate in the opposite direction, or even push you off course. It’s this DLC’s new gameplay mechanic, much like tractor beams in V.O.I.D. Riders, but I honestly might like wind zones even more. Between the massive speed boosts and the mid-air directional changes, the developers were able to find super inventive ways to implement the wind zones, creating an entirely new skating experience for OlliOlli World: Finding the Flowzone. 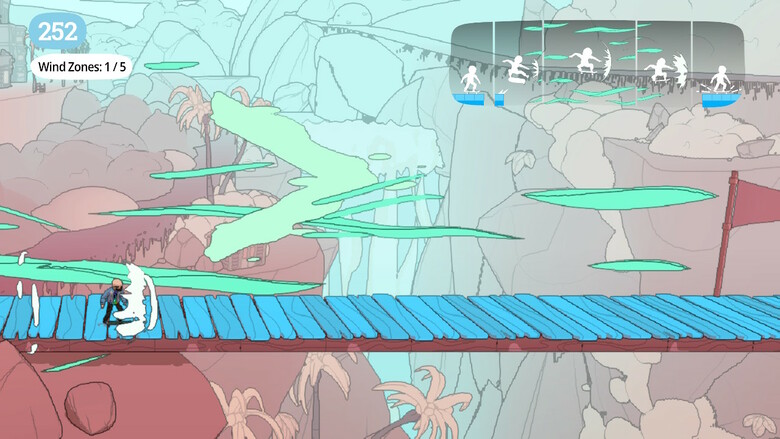 Upon finishing the intro level, you are introduced to a new crew, the Radmospheric Explorers, composed of Squid the pirate, Licht the astro-cartographer, and Professor Planks the weather expert. This bickering trio have teamed up to search for Radlantis, the lost city of the Godz, and to stop B.B. Hopper the business frog from exploiting the city. But they’re missing one important member of their team – a wind-skater like you! The only catch? Radlantis isn’t in Radlandia; it’s hidden in The Flowzone Layer, a continent of clouds filled with all sorts of radical skate challenges (as well as the missing pieces of the map to Radlantis). So you take to the skies in the Explorers’ balloon boat to help them out. 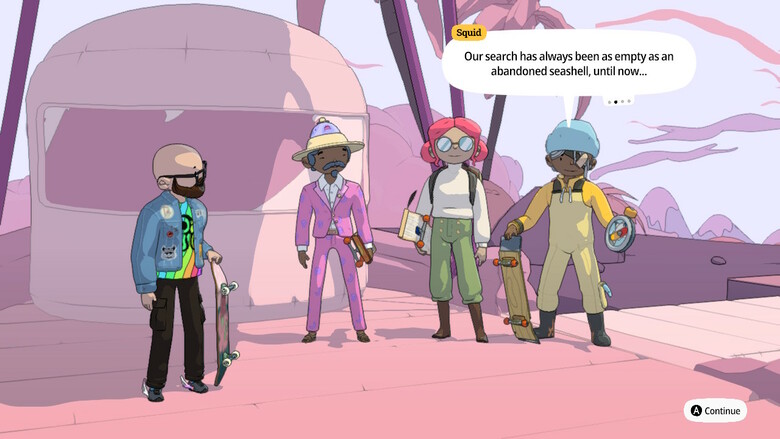 You are the chosen one, after all.

Within the Flowzone Layer are four distinct areas – Cirrus, Cumulus, Nimbus, and Stratus – each containing three levels. And within these levels are three map pieces that you must collect to progress through the Flowzone Layer. That’s 36 map pieces total to find, but you don’t have to collect them all to locate Radlantis. This is good news for players like me, because the new courses will absolutely put you through your paces by testing all of your skating skills. For reference, I was only able to collect 32/36 pieces before writing this review, and I really tried my hardest to collect them all. 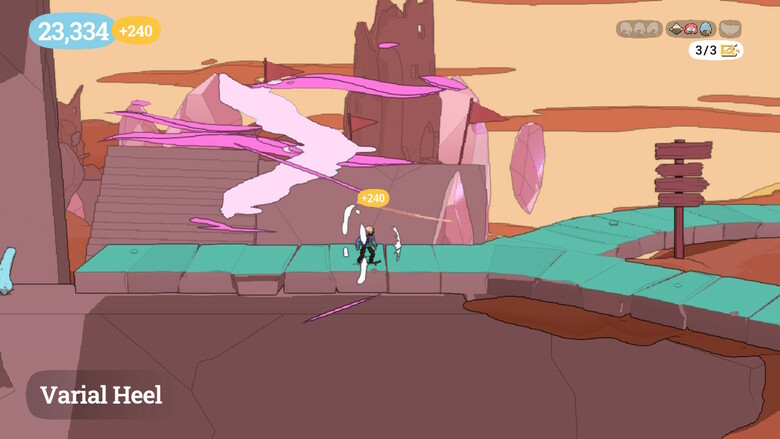 Branching paths are still very much a thing in this DLC.

The developers seemed to know this DLC was going to be more of a challenge to some players, so they added some “Skate at your own risk!” warning labels at the beginning of key levels to detail what skills you need to know in order to successfully skate through the Gnarly and Burly routes to collect all the map pieces – and yes, the Burly routes are much more intense than the Gnarly routes. 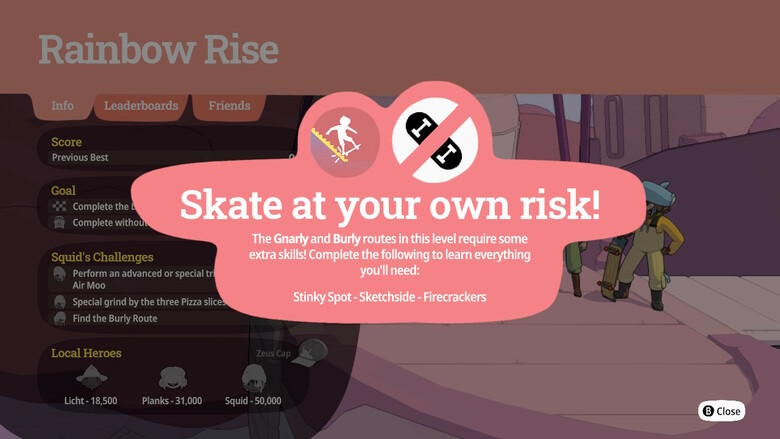 I'd recommend finishing the base game before starting this DLC!

If you’re picking up OlliOlli World to play this DLC after a long period of not playing the game, the disclaimers are a welcome addition. For example, I forgot how to perform the firecracker skill, and this expansion makes significant use of it in some of the levels. It’s quality of life updates like this that show the developers really want you to have the most enjoyable experience while playing this game. 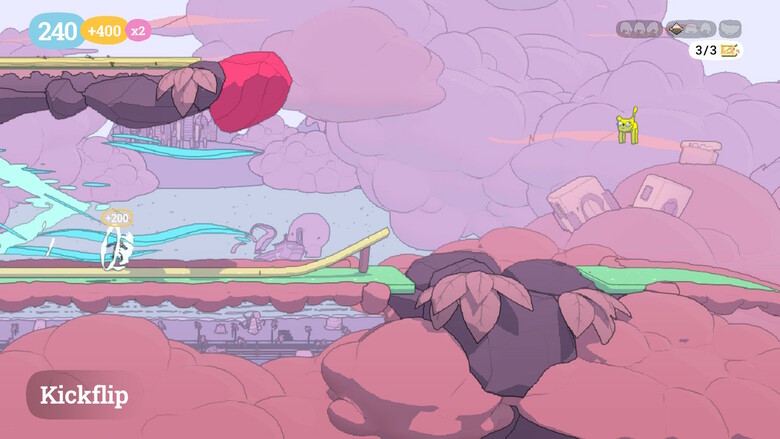 There are 17 levels total and one boss level in Finding the Flowzone, making this DLC a good afternoon play if you just want to burn through all the courses to hit the credits. However, with all of the extra challenges in each course, as well as post-DLC challenges, it’s easy to sink several hours into this final expansion – especially once you discover Radlantis and unlock the Radlantis Rivals Cup levels, where you’ll be tested on your grind, grab, and wallride skills in some truly challenging wind-based levels. 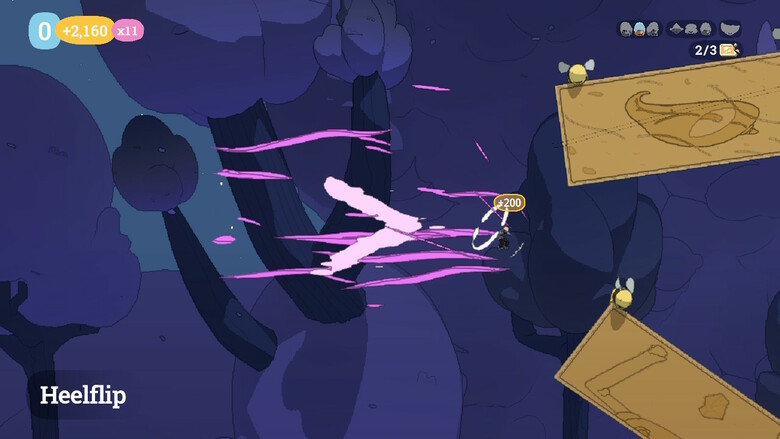 Between the already beefy base game and the sheer amount of content found in the two expansions, I don’t think you could ever tire of playing OlliOlli World. It’s a truly spectacular skating experience, and Finding the Flowzone is the perfect closing chapter to the OlliOlli World saga. I’m sad we won’t be getting any new worlds or levels, but I am thankful for what we were given.