Grab your laser and link up! 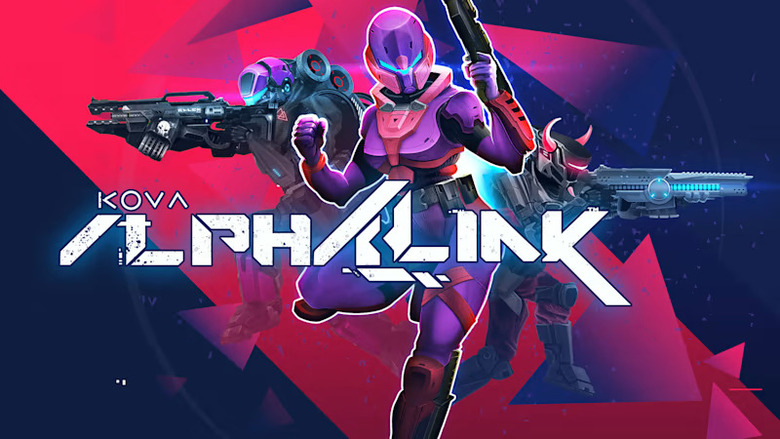 The first impression you get of any game is vital to the overall experience you have with it. It’s no easy task for a game to hook you in and get you invested right off the bat, making you eager to jump in and see what it has to offer.

AlphaLink, a multiplayer 2D arena shooter game developed by Texas-based independent game studio Black Hive Media, manages to do just that. Through its impressive cyberpunk aesthetic paired with a quick gameplay loop and its engaging lore and unlocks, AlphaLink managed to pull me right in and keep me coming back. 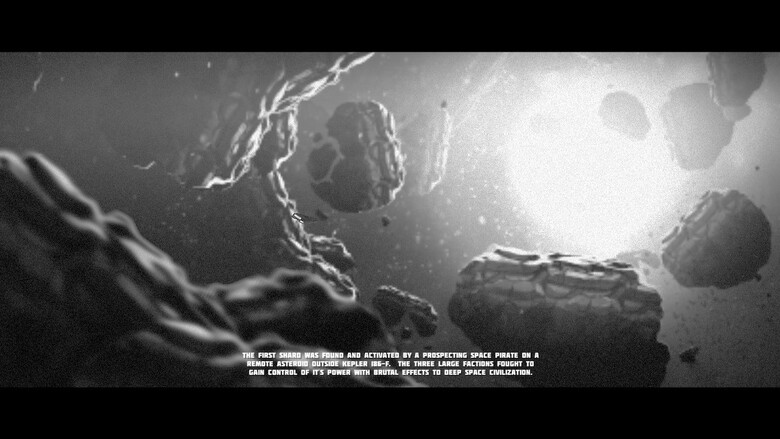 A stark yet beautiful shot of deep space greets you upon loading.

The first thing that really drew me to AlphaLink is undoubtedly the game’s aesthetic. When you first launch the game, you’re met with a striking monochromatic cutscene set in deep space, which really sets a bleak tone for what’s to come.

Further loading in, you’re met with The Meat Grinder Transit Station & Bar, which serves as the game’s hub. This first in-game shot is especially striking, given its mechanical, futuristic look paired with the bright neon of signs and in-world advertisements. It’s unmistakably cyberpunk-inspired, and it pulls it off very effectively. 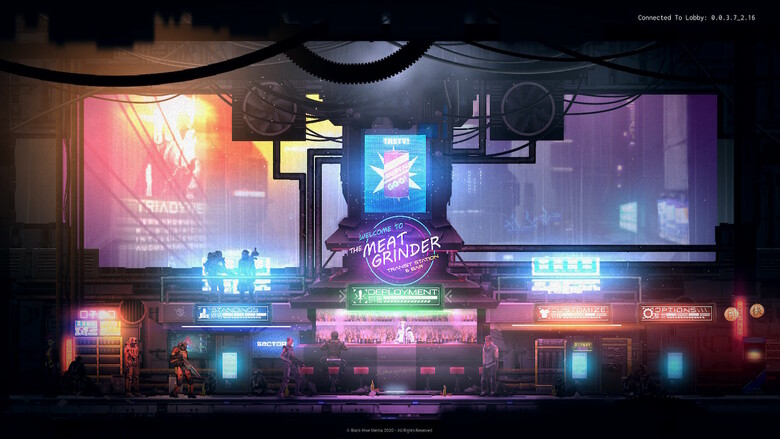 The hub isn’t the only place you’ll see this theme, either. You’ll find it all throughout the game. From the cutscenes, to the levels, all the way down to the shop interfaces and loading screens, AlphaLink maintains a very consistent style throughout, and it gives it a very unique identity.

Even the game’s music and sound effects add to the aesthetic. Both are very futuristic without becoming tacky or cliché. It all fits together well to make the game’s already very cohesive aesthetic that much more clear. 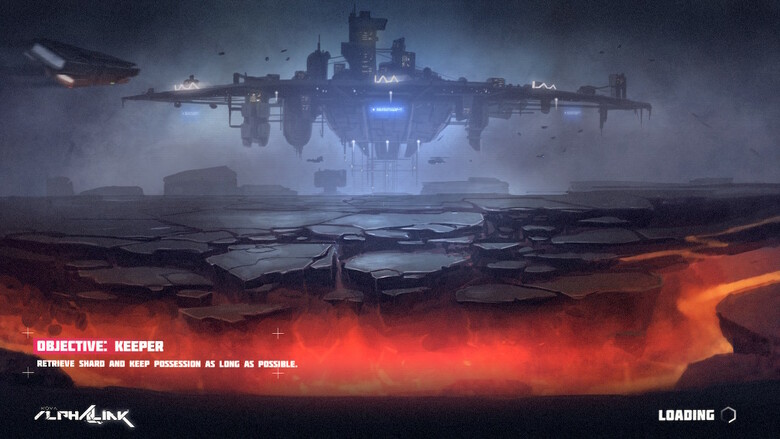 A between-round loading screen carries on the game's style.

The presentation of the game may have been what initially drew me in, but it’s not what kept me coming back. That would have to be the actual gameplay of AlphaLink, which is served up in fast-paced, digestible rounds of combat.

AlphaLink is a multiplayer arena shooter, and it’s actually really simple in concept. Each round has a different objective, ranging from getting the most kills to maintaining control of areas of the stage and more. Each mode feels distinct from the others, while still fitting together well. Every round will see you compete against others using the same tools, it’s just the objective of each round that changes up and keeps things fresh. There’s enough variation where I never felt the gameplay loop grow stale.

Speaking of the tools you’ll use, I found the controls to be easy to get a hold on, with attacks consisting of a ranged attack and a melee attack. Along with aiming, running, jumping and an air dash, it all strings together very naturally.

Best of all though is the time each round takes. These aren’t 10-minute matches that drag on and overstay their welcome. Instead, each game is relatively short, lasting only a few minutes for most of them. This adds to the overall pace and really stops things from getting old. I never got frustrated from losing a match, because it was over and on to the next so quickly.

Even playing in local multiplayer, a setting that can grow pretty tense in competition, things moved so quickly that there were hardly any moments of real agitation. 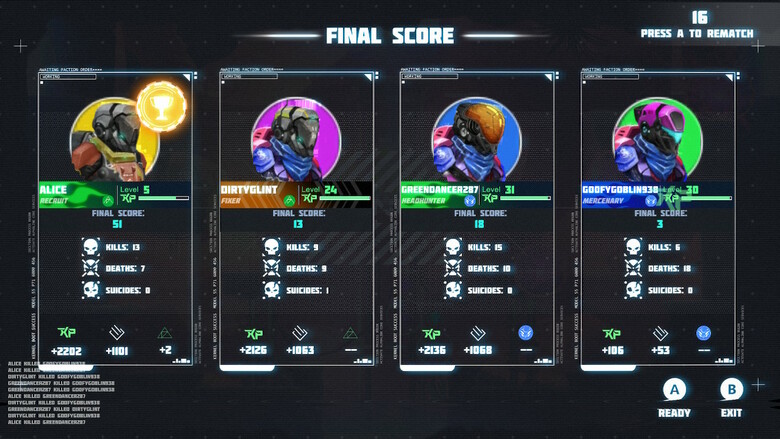 An after-round briefing details the winner and stats for each player.

To be clear, this frenzied, quick-round gameplay style also has its drawbacks. For those that are more methodical in their tactics like I tend to be, you’ll find a learning curve.

I started out thinking strategically, but soon found myself mashing buttons more than planning my next move. This isn’t necessarily a bad thing, since there’s certainly a place for that kind of action, but it took me a bit of rewiring to get used to.

The scale of the actual arenas you’ll fight in adds to this. You control a relatively small character against a comparatively large backdrop, and when things are moving so quickly it can be easy to lose track of where you are.

At least for me, a lot of the challenge came from keeping up with my own location as I jumped around. Pair this with needing to aim your laser and shoot, and it can be pretty hard to get the hang of. It led me to using my melee more than my laser for a good bit, which made the chaos even harder to keep track of.

All in all though, these relatively minor hiccups didn’t stop me from coming back to AlphaLink. In fact, I’d say that mastering these hurdles was really quite satisfying. 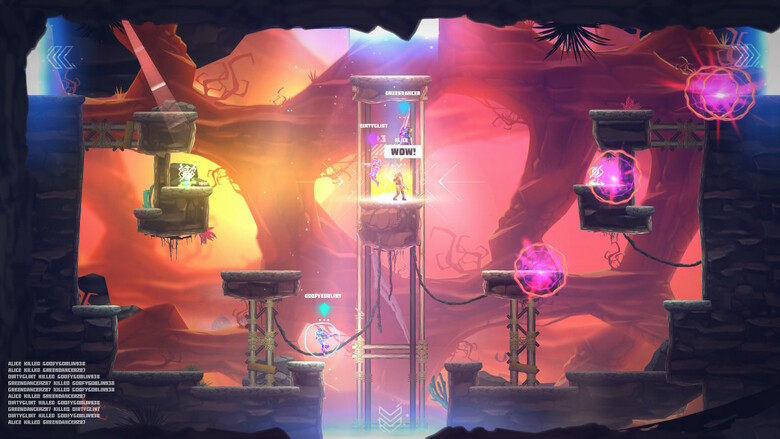 One of the larger arenas in the game, where it can be tricky to keep track of things.

While the gameplay of AlphaLink itself kept me coming back for more, it’s far from the only reason to do so. Through the many rounds you’ll play, you’ll earn Galactic Credits and Experience, both of which allow you to unlock and purchase new cosmetic items to wear on the battlefield. From armor, the helmets, to gun skins, to info card banners, there’s no shortage of styles to unlock to stand out from the crowd.

I was pleasantly surprised at the variation in these cosmetics. Helmets feature your standard robotic fare, but alongside those are big smiley faces, a devil (with a neon goatee!) and even a pumpkin head. You might expect the armor or gun skins to blend together, but I found that each one stands out. This level of distinction really pushed me to keep playing and get better so I could earn more cosmetics. All this without a loot box in sight was honestly pretty refreshing.

Along with the cool apparel, you’ll also find plenty of lore throughout the game as you level up and progress. In fact, it’s one of the bigger elements of the game, with the opening cutscene mentioned before being the first thing the game introduces you to. You’ll see even more cutscenes and meet NPC characters in the hub world that will give you tidbits of story to put together, and it’s compelling enough that I really wanted to see it through.

Three factions are featured throughout the narrative, and you even get to join one at the beginning of the game. The better you do in online multiplayer, the higher standing your faction will earn. I found this aspect to be especially unique, and it gives even more motivation to get better at the game and beat others. All these things combined with the snappy gameplay loop make AlphaLink a really fun, engaging time. 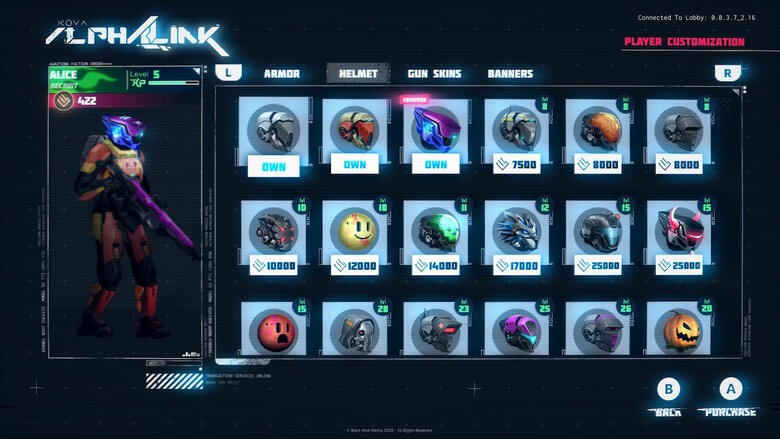 One section of the cosmetic shop, where you can suit up for battle.

In the end, AlphaLink isn’t without its setbacks. Its frantic gameplay loop isn’t for everyone and might take some getting used to, but I found it genuinely satisfying to learn and master. Even given those notes, I still enjoyed the time I’ve spent so far with AlphaLink and I’ll absolutely be coming back to it.

Its impressive presentation and aesthetic make it a sight to see, and for me it was worth taking a look for that reason alone. Put all that together with fun unlocks and an interesting narrative, and you’ve got yourself a pretty solid time.

AlphaLink is out today for Nintendo Switch, and I’d definitely recommend it if you’re in the mood for some fun at breakneck pace.