Getting to the core of things 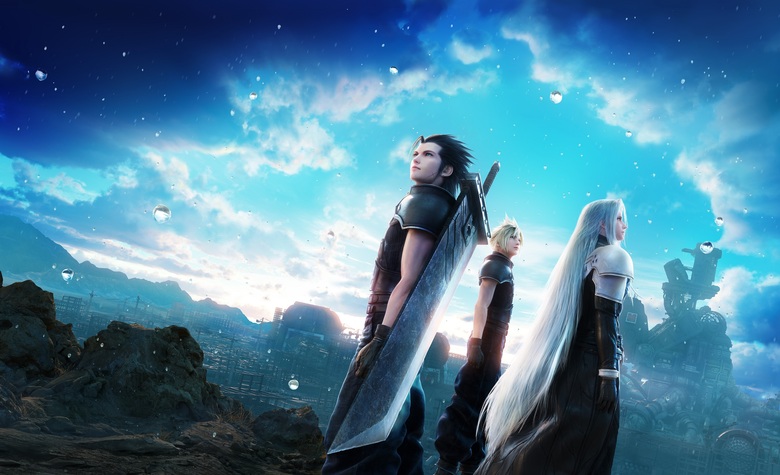 In 1997, Square set the gaming landscape on fire when it released Final Fantasy 7. Gaming urban legend says the misleading adverts caused the core JRPG to become the most returned videogame of all time. Nevertheless, given its sales numbers and enormous cultural impact, there’s no doubt it was a breakout success.

In 2004, the newly-merged Square Enix would begin expanding the world of Final Fantasy 7 through a movie and multiple spin-off games. The best received of these games was the 2007 PSP entry called Crisis Core: Final Fantasy 7 – an action-oriented RPG that serves as a prequel to the original Final Fantasy 7.

In June 2022, Square Enix held a 25th Anniversary celebration of the original Final Fantasy 7 and revealed Crisis Core: Final Fantasy 7 Reunion – an Unreal Engine 4 remaster of the 2007 game destined for all current consoles. 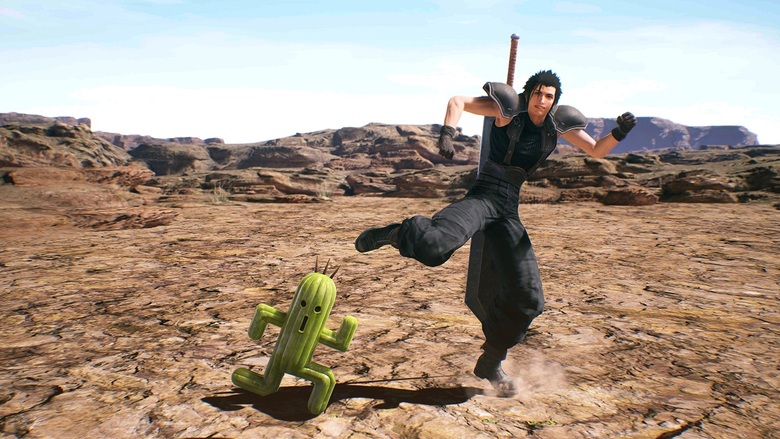 The fluorescent-soaked city of Midgar is home to the headquarters of Shinra, a powerful organisation with an equally dominant private army. Zack Fair is a gifted young soldier in the army’s SOLDIER elite unit. With the aid of his mentor, Angeal, and revered SOLDIER hero Sephiroth, you play as Zack as he begins investigating recent disappearances of fellow SOLDIER colleagues.

The opening seconds of the intro movie scream high production values, and when the initial menu screen loads up with its beautiful music, the care that has gone into this remaster (and the original game) is obvious.

Alongside remade graphics, modern rendering techniques and a thoughtfully rearranged soundtrack from original composer Takeharu Ishimoto, comes a refresh of the core gameplay experience to bring it up to date with modern sensibilities.

With a linear campaign that lasts around 15 hours, Square Enix did well to more than double the play time with optional “missions” accessible from save points. You’ll spend some of your time in hub-like areas that contain small side-quests that unlock these missions, but most of them play out the same as the rest of the game does. 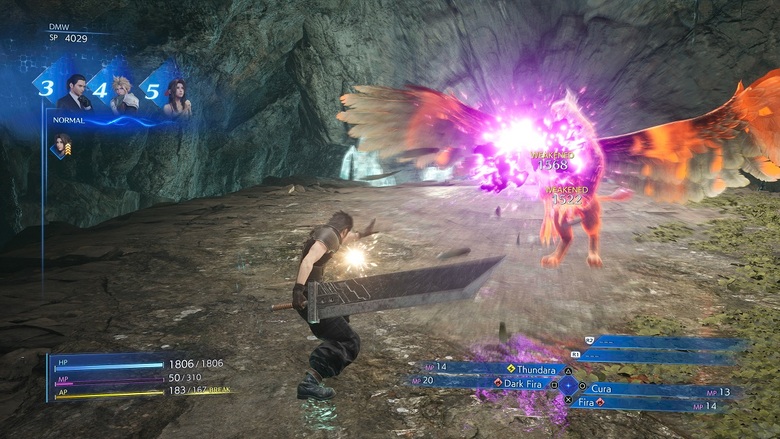 The bulk of your time is spent in battle corridors that work as either a link between the hubs or as the entirety of an optional mission. These can be explored to find item chests in-between the frequent random battles that will occur. These random battles are the main part of the gameplay, and fortunately, they have incredibly satisfying mechanics and responsive control. As you only play as Zack, the game goes into detail on what magic, attack, special attack and stat-boosting equipment (called Materia in Final Fantasy lingo) Zack can use. By using them, Zack and the Materia will level up, with more powerful versions of each discoverable as the game goes on. By choosing to explore some of the optional missions, you’ll be able to get ahead of the difficulty curve and find new Materia to use and speed up your progress in the main campaign.

Battles take place in real-time rather than being turn based, and they take heavy inspiration from the system that is used in Final Fantasy 7 Remake. Attacks and Materia are assigned to the face buttons, with potions available through a carousel selectable with the ZL and ZR buttons. Enemies can come in waves or in a set number and have basic patterns of attack. One of the changes in this remaster is the dodge button. Having not played the original, I can’t comment on the difference, but I can tell you that dodging an incoming attack is gratifying. Swinging Zack’s iconic Buster Sword into an enemy delivers a meaty sensation (especially when choosing the heavier attack variant) and is something you’ll enjoy doing again and again.

There is also the ability to fuse Materia to create new types, opening the door to customization and fruitful experimentation. Mix Fire with Ice and you get a different elemental, or Fire with an action command Materia and create a heavy attack that also deals fire damage.

Finally, there is the game’s unique battle feature called the Digital Mind Wave (DMW). This is basically a slot machine that constantly rolls in the top left-hand corner during a fight. If it lands on three matching icons, you will get a status boost or a special attack related to the icon. As you complete more missions and progress in the story, additional characters, summons and Materia will be added to the DMW. It’s an odd addition, as the DMW effects are random, meaning it can’t be relied upon during a fight. At the same time, when it does give you an advantage, you appreciate its presence. 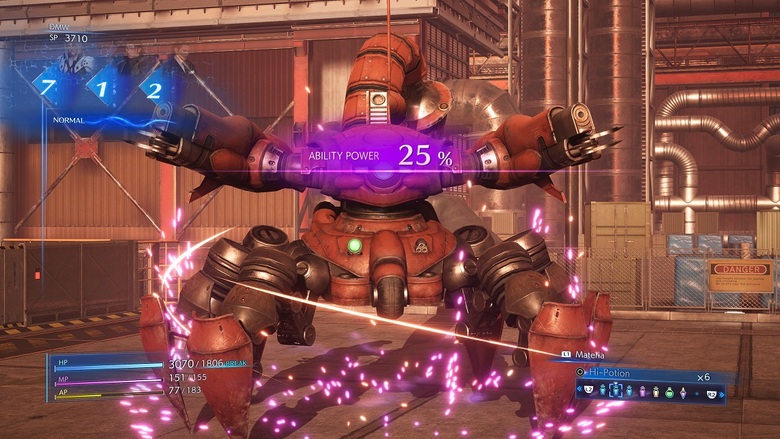 The gameplay loop is addictive in the most enjoyable way, and as it was originally designed for the PSP, the game is custom-made for short bursts of portable play. More so than other 3rd party efforts, this makes playing Crisis Core uniquely suited to the Switch. I lost days going through many of the bite-sized missions and always felt a sense of progression at the end of each one.

Thankfully, the technical presentation of Reunion is one of the best to be found on Switch too – as long as you can stomach Unreal Engine 4’s image reconstruction techniques, that is. My personal bugbear of Temporal Anti-Aliasing Ghosting is visible throughout, and the resolution in handheld can drop to SD levels. That said, the image has a sharpness to it that’s unusual for UE4, the lighting is excellent, the graphical assets are superb, and the framerate is a solid 30fps with no noticeable drops even in the heat of the most intense battles. The areas in Reunion are far more constrained than the ones found in FF7 Remake, but they do compare favorably, and some locales are even present in both. This does inevitably lead me to dreaming of a port of Remake to Switch, despite how unlikely that is.

The 10-chapter story that ties the entire experience together can be very melodramatic. Absurdly so at times, even for Final Fantasy. It’s also confusing, with many seemingly aimless storylines abandoned partway through, but rest assured that revelations near the end tie things together and apparently forgotten mysteries resolve nicely.

The characters in Crisis Core are always enjoyable to spend time with. Regardless of where you are in the gameplay loop, you are never far from an email, cut-scene or bit of banter that will flesh out the characters and the world. The writing can be uneven, but Zack is frequently charming and funny. Supporting characters worm their way into your heart too, with a few returning characters from Final Fantasy 7 going through their origin stories, along with characters created especially for Crisis Core. Zack’s best friend Kunsel is a 2nd Class SOLDIER who communicates via phone and email for the whole game. The blossoming friendship is heartwarmingly written and avoids feeling forced or rushed. Each time an alert came up saying I had an email from Kunsel, I smiled and looked forward to reading it. Even as I type this, I hope Kunsel is happy and safe! 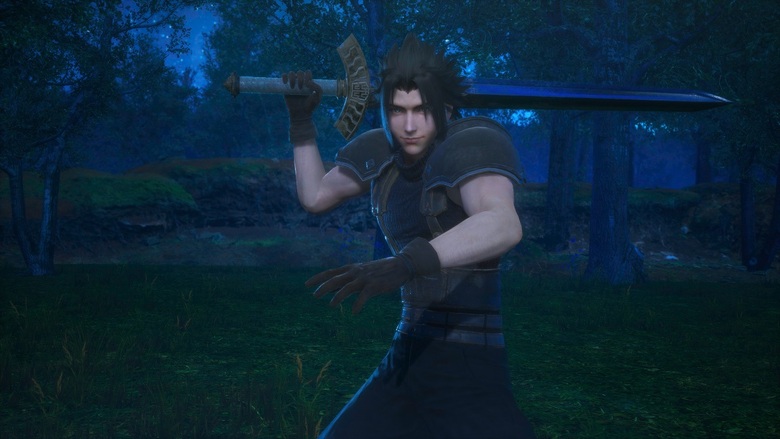 The emails come from many different people and organisations, but the way they all come in and how their content reflects the progression you make do well to anchor you to a feeling of participation in an ongoing world.

Reunion comes to us marketed as a Remaster, but it’s so much more. There are quality of life enhancements, gameplay changes, a total and complete graphical overhaul and all-new voiced dialogue.

The actual game itself occupies that AA space that has been left unfulfilled for a few years, complete with great production and tech behind it, but without the funding of a AAA release like Final Fantasy 7 Remake. It also harkens back to a time when large video game IPs could still be designed with portable play at their heart, with bite sized mission structures and a campaign that doesn’t expect hours of your time in a single sitting.

I enjoyed all of my time with the expertly-designed battle system and the engaging cast of characters, but rolled my eyes slightly at the occasionally clunky storytelling and dialogue choices. If you can deal with those minor gripes (and the TAA!), then there’s a lot to love in this package – one that’s core design may even be experienced best on the Switch.