REVIEW: Chinatown Detective Agency is a mystery worth solving

You're on the case, gumshoe! 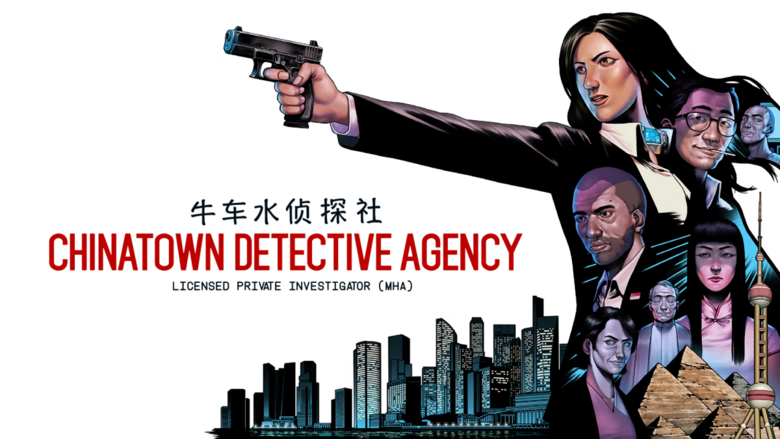 There are plenty of adventure games that put you in the shoes of a detective and task you with solving mysteries. Chinatown Detective Agency is the rare game that actually makes you feel like a detective. How it accomplishes that is simple; It makes you do actual detective work. Rather than solving puzzles using only in-game tools, Chinatown Detective Agency sends you beyond the realm of your Switch screen. A retro throwback to Carmen Sandiego and 90’s adventure games, you’ll be required to hop online and use your favorite search engine to acquire real world information and solutions. The experience is inventive, challenging, and doesn’t quite feel like anything else made these days. 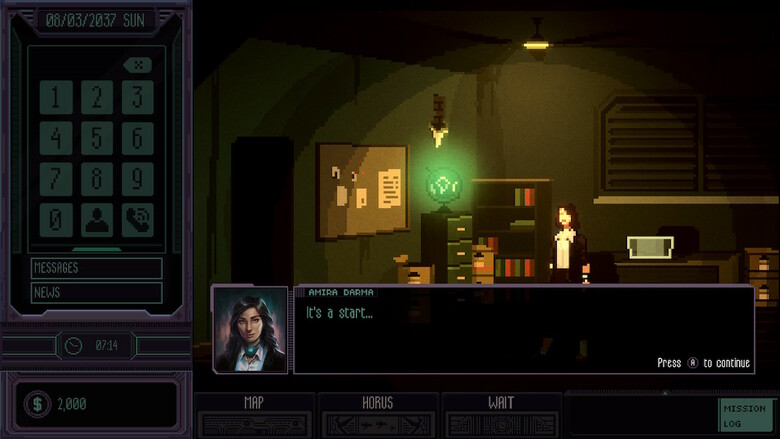 I can't wait for phones to look like this again in the future.

Chinatown Detective Agency is set in Singapore in the year 2037, though you’ll be traveling to countries all over the world throughout the course of your adventure. The game imagines a Blade Runner-esque, cyber noir world full of drones, AI, and the endless complications that new technology introduces. At the same time, the graphics and aesthetics are decidedly lo-fi, in tribute to the creators’ inspirations. The pixelated graphics and your in-game phone and email account all look like something out of an 80’s sci-fi movie. This dichotomy between the old and new makes for a charming blend of nostalgia and futuristic aspirations. 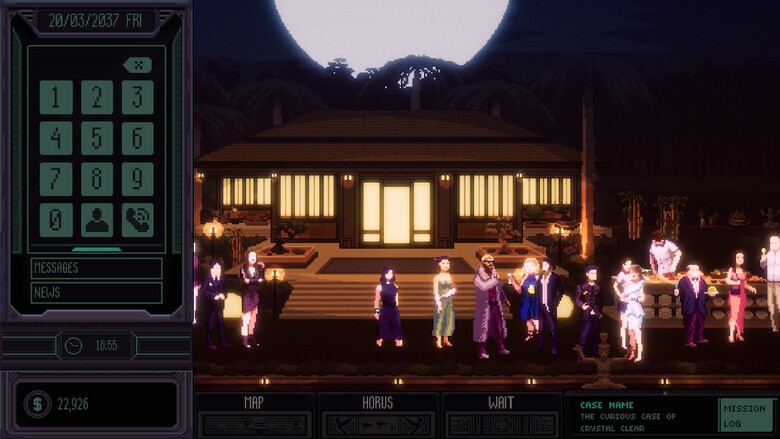 The graphics never feel primitive or outdated either. Their style is rooted in the past, but clever application of light and shadow make this game a treat to explore. Animation is limited, but characters and background locations have been drawn with a level of skill that makes for some truly beautiful scenery. All of this is enhanced by a cool, jazzy soundtrack, and the atmospheric sounds of bustling sci-fi cities. It’s a great place to spend time in. 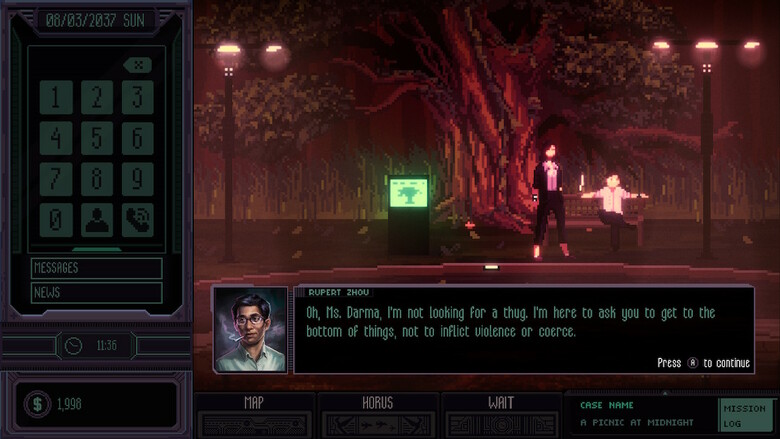 The story and worldbuilding are two of the areas in which Chinatown Detective Agency really shines. Again, the game is set in the near future, but it’s very much based on real world events. Each location you visit is accompanied by an optional bit of lore regarding the city’s history. Some of these events are real while others are imagined, but even the more fantastical ideas don’t sound too far-fetched. Like some of the best sci-fi works, the writing goes just far enough to be exciting (or chilling) without sacrificing plausibility. The game also doesn’t shy away from discussing issues like war, genocide, or the recent pandemic; all of which help to add texture and make things feel real. It’s a well done hybrid of hardboiled detective fiction and modern concepts like AI sentience and cyberterrorism. 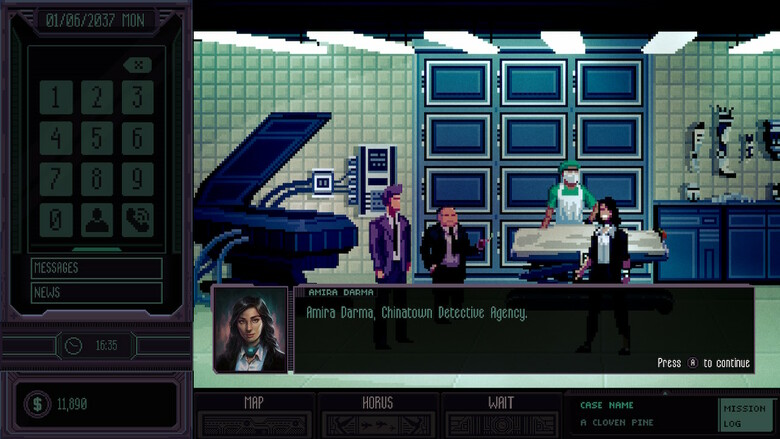 The morgue is an underrated setting for a meet cute.

The focus of the story is on private investigator Amira Darma. A retired police detective, she has her own history, strengths, and weaknesses that you’ll discover as you play. The same is true for the cast of characters that surrounds Amira, both her clients, and the friends she makes along the way. Not all of them have extensive parts to play, but they give the impression of being well realized, three dimensional human beings. They also represent a variety of different cultures, beliefs, and attitudes about the world. In combination with your globetrotting adventures, this makes for a refreshing perspective that we don’t normally get in video games. Large sections of the game are voice acted by authentic talent representing the different ethnicities and backgrounds of the characters. All of the actors do a superb job, and it’s clear a lot of care was taken to do justice to their voices. 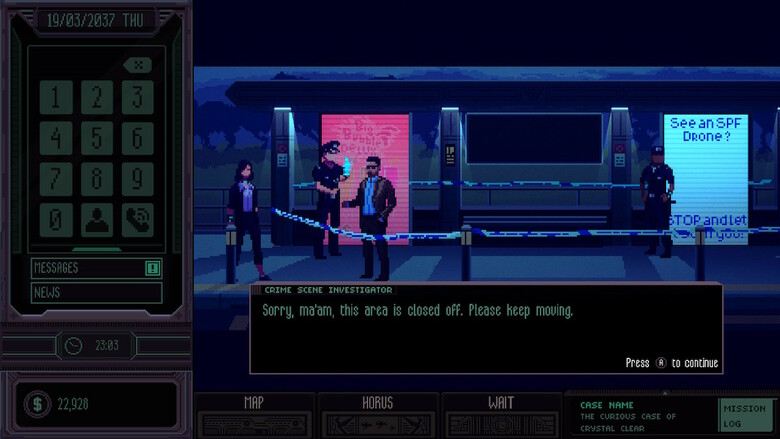 Officer, please, I'm just trying to get a snack.

Cases in Chinatown Detective Agency are what you might call “bite-sized,” usually consisting of two or three key locations and puzzles to solve before things get wrapped up. This could be a little jarring at first if you’re expecting each case to contain a complete arc in and of itself, but most of them will fold into the larger story eventually. The shorter nature of the cases makes it easy to pick the game up for just a little while to solve a puzzle or two when you can’t commit to a longer session. Puzzles are what the bulk of these cases consist of, deciphering clues in order to figure out what to do next. Frequently, the answer will be a location that you need to visit, either via train in Singapore, or via plane to another country entirely. 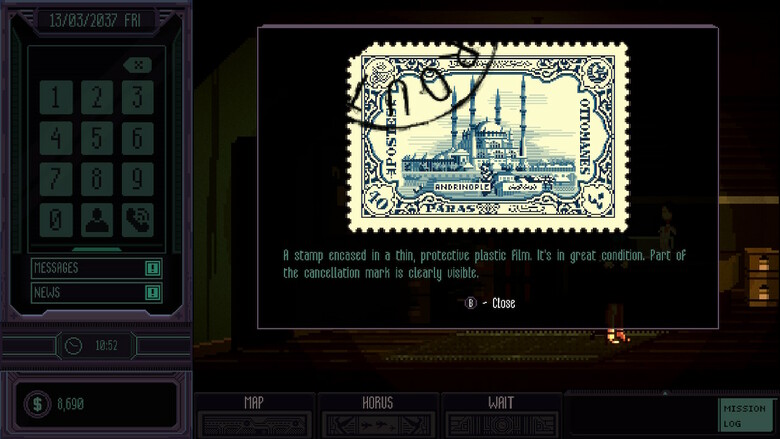 After careful consideration, I've managed to deduce that this is in fact, a stamp.

Again, these puzzles all relate to actual real world knowledge. Researching facts on the Internet is strongly encouraged, if not outright required. It might feel like you’re cheating at first, but this is an integral mechanic of the game. This amounts to more than a simple trivia test, and the answers won’t be as straightforward as you might expect. Sure, you can look up the source of a clue online, but what you do with that information is something else entirely. Sometimes just knowing what you should be searching for is itself the puzzle.

The types of head-scratchers you’ll come across include riddles, ciphers, historical and literary references, and more. (Anyone who’s been to an escape room should feel right at home.) Some of these will definitely require some outside the box thinking, so don’t get discouraged if you can’t solve something right away. If you really get stuck, you can always call your contact Mei Ting for a hint, or have her give you the solution outright. If you stick with it though, it can be immensely satisfying to discover the answer for yourself. (The Switch’s screen capture functionality comes in handy here too, allowing you to easily keep track of and zoom in on evidence.) If you get an answer wrong, you can usually course correct and try something else. Sometimes you will be forced to start a case from the beginning as punishment for failure. This can be tedious, but since the cases go by quickly, it’s not too much of a burden. 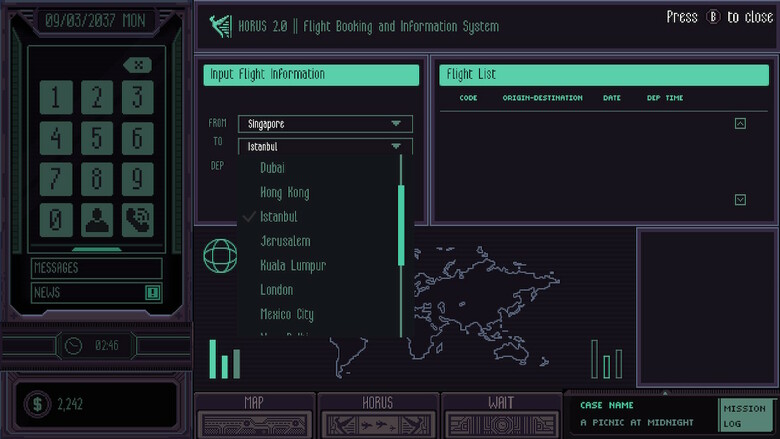 Flights in this game are approximately 200% less painful than in real life.

The game is fairly linear, but there are two key aspects that help to open the world up a bit: time, and money. An in-game clock keeps track of time, with each in-game minute lasting about one second in reality. Time comes into play frequently when scheduling flights to other countries, or when making appointments and meeting clients. Don’t worry too much about having to sit around at the airport waiting for your flight to come in. A “wait” option in the menu will allow you to speed forward up to 48 hours to the time you need to get something done. 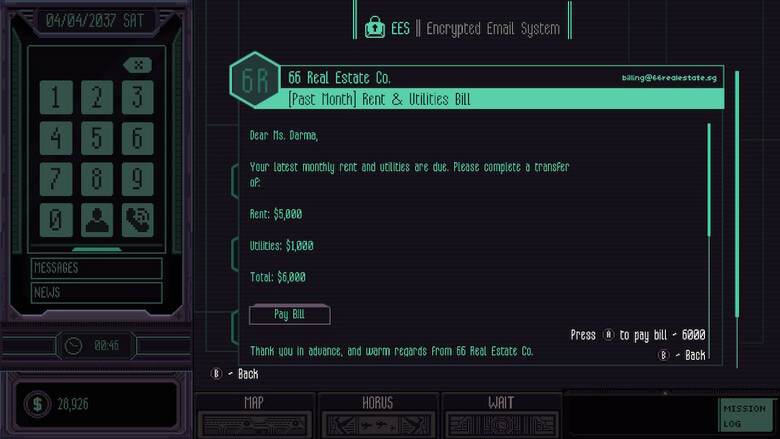 As for money, you will be getting paid for these cases, with the occasional bonus for going above and beyond. Mostly, you’ll be spending cash on plane tickets, but occasionally you may need to bribe someone, or even pay some bills. Every month an email will inform you how much you owe for your rent and utilities. If you run out of money and can’t afford to pay your bills, it’s game over.

The time and money systems in Chinatown Detective Agency both feel a little half-baked, and are probably the game’s weakest points. They’re both interesting concepts, but it feels like there was potential for them to go a lot further. Instead, they fade into the background after a while, hardly ever impacting a case in any meaningful way. You’re free to ignore the day/night cycle, never needing to sleep, and you can wait at the airport for hours without any consequences or effect on gameplay. Meanwhile, it’s very unlikely that you’ll ever run out of money, unless you really struggle and end up flying around the world twenty times in pursuit of a lead. The time and money systems are in place to give the player some sense of urgency, and an incentive not to brute force puzzles with trial and error attempts. In that regard, they mostly do their job, but they could’ve been expanded on and incorporated in more interesting ways.

The same can be said for another mechanic the game introduces; expanding your office space and hiring new employees. When the concept first pops up, it seems like it will really open up the game world and allow you to run your own personal PI tycoon style game on the side. Unfortunately, that’s not the case, and it really feels like an afterthought. I would’ve loved to see more of those aspects to help flesh out the world and gameplay, but the only real meat of the game is the primary story and its mysteries. 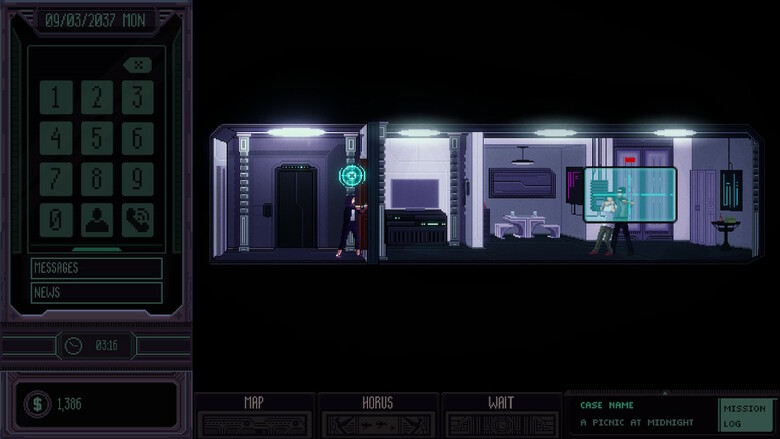 Did I mention that there are occasional shootouts in this game?

A number of technical gaffs hurt the experience, too. Occasionally, music or sound effects will come in at the wrong time, or a voice acted line won’t play when it’s supposed to. This is disappointing considering how engaging the scripted scenes are otherwise. The save system is another oddity, only allowing you to save your game in between cases, not while one is currently ongoing. Presumably, this is so you can’t save right before making a guess at a puzzle in an attempt to game the system, but it’s needlessly restrictive, even with the cases being as short as they are. These little hiccups are signs to me that the game could’ve used just a little more time in the oven. 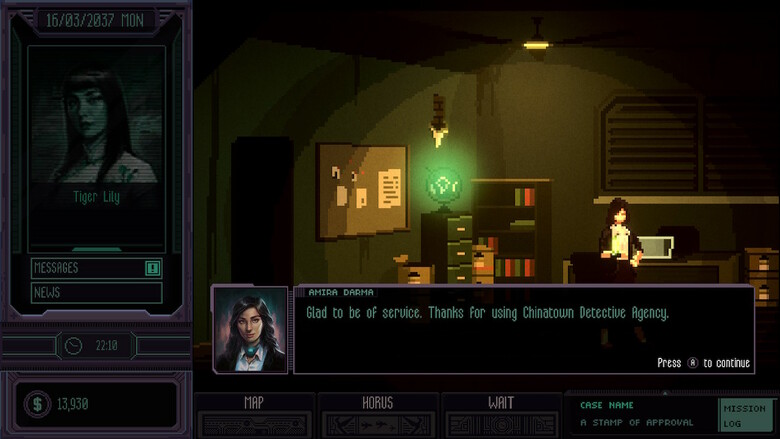 No, thank YOU, Amira!

Where Chinatown Detective Agency excels is in its setting, characters, and unique approach to puzzles. With more time and an expanded budget (it was funded on Kickstarter in 2020), I think this could have reached much greater heights, but as it stands, it’s still a tight and engaging little sci-fi thriller. The puzzles are rewarding to solve, and often genuinely educational in an entertaining way. The mysteries are intriguing, and the game isn’t afraid to explore heady themes. Expect to encounter commentary on class struggles, corporate monopolies, political oligarchs, cultural appropriation, and more real world issues that are extremely relevant to our times. The game’s unique approach and perspectives on these subjects are much appreciated.

If you’re a fan of old school adventure games, hardboiled detectives, future noir settings, or geographic brain teasers, Chinatown Detective Agency is absolutely worth taking a look at. Hopefully, this isn’t the last time we see Amira Darma take on a case. I think she could have a bright, neon-lit future ahead of her.