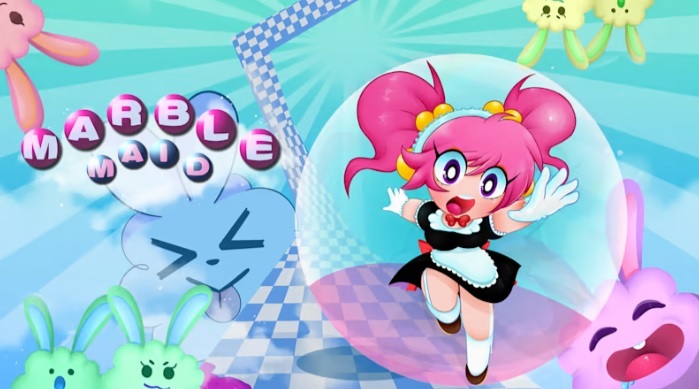 WARNING: THIS GAME INCLUDES ADULT CONTENT AND IS RATED FOR MATURE AUDIENCES ONLY

I don’t know what it is about the ball-rolling genre, but I absolutely adore it. Super Monkey Ball, Marble Madness, Kororinpa, and so on. They all have the simple goal of rolling a ball through a stage to an exit, and that’s pretty much it. Yes, there are some bells and whistles thrown into each game to spice things up, but at their very heart, you’re just rolling a ball. I guess that’s all it takes to keep me entertained!

Marble Maid is the latest game in the ball-rolling genre to come around, and it too offers a, let’s say…unique hook along with the tried-and-true gameplay. For those who don’t know, Marble Maid is a ball-rolling game with a very specific kind of R-rated content. These ‘lewd’ games have been taking off (pun slightly intended!) in recent years, and they’ve definitely found a market on the Switch. There’s little doubt a greater discussion about lewd games could/should be had, but I think most would agree that these titles usually lack substance in exchange for…ahem…style.

I don’t know, perhaps that’s not a fair assessment. I’m not a lewd game aficionado by any means, but I’ve certainly heard fans of the genre complain about games that focus on the lewd content to their detriment, pushing gameplay to the back burner at best. To be blunt, that’s exactly what I was expecting from Marble Maid, and it turns out I was quite wrong. Sure, it’s not the most finely-tuned gaming experience I’ve ever played, but I’ll be damned if it’s not a solid outing, so much so that it’s kind of sad the adult content makes for a barrier to entry. 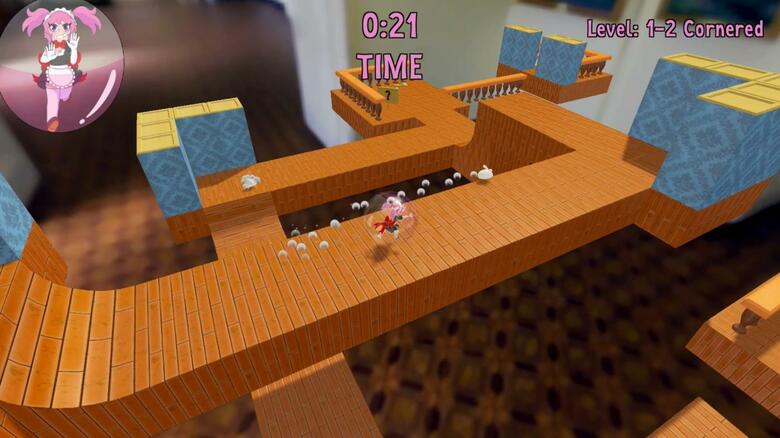 Now we're on a roll!

While the lewd content here is definitely the most attention-getting difference with this ball-rolling game, Marble Maid also includes its own twist on gameplay mechanics. In the Super Monkey Ball franchise, the main objective is to get to the goal before time runs out. Marble Maid has the same objective, but there’s a wrinkle thrown into the mix. The only way to exit each level is squash three out of five dust bunnies. Once you hunt down at least three dust bunnies and put them out of their misery, the exit platform opens. Now the ‘maid’ in Marble Maid finally makes some sense!

In Marble Maid, the troublesome dust bunnies are part dust, part literal bunny, and they hop about to avoid your marble at all costs. Of course, it’s your job to roll around and clean these bunnies up, just as any good marble maid would. Also, just in case it wasn’t clear, Marble Maid features a literal maid trapped inside of a ‘marble.’ It’s exactly the same kind of ball you’d see in Super Monkey Ball, but while AiAi and GonGon speed around collecting bananas, the titular Marble Maid just wants a spotless household.

Outside of the dust bunny mechanic, Marble Maid is as straightforward as a ball-rolling game could get. There’s a hub area that lets you access different worlds, and each of them takes place in giant, loosely household-themed stages. Thematically, the stage makeups aren’t all that different, but unique hazards drive the gist of the areas home. You’ll visit locations with pools of water, icy patches, burners ready to set you ablaze, giant meat cleavers looking to split you in twain, and so on. Each of these worlds also uses a real-life picture to create its skybox, which aids in crafting a more distinctive feel. 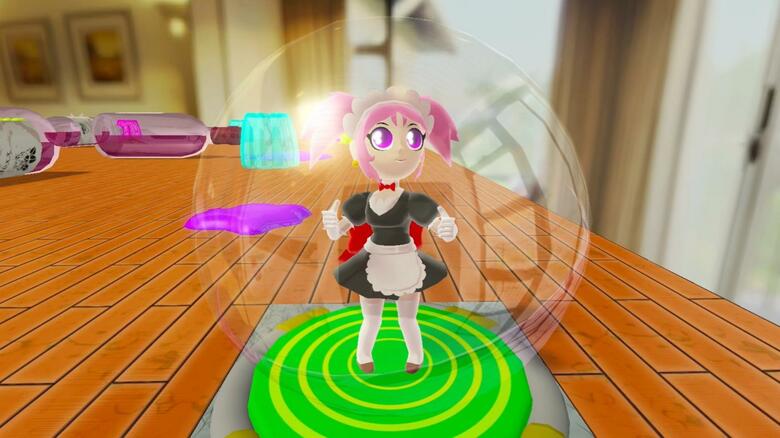 The long-awaited sequel to Bubble Boy?

Marble Maid is very much a no-frills experience, but I’m totally okay with that. There’s little distracting you from the gameplay, which is what I prefer from these kinds of titles. There would be nothing wrong with a marble game that cooks up a grandiose story and deep lore, but when all’s said and done, I’m just here for the ball-rolling. Marble Maid definitely takes the less-is-more approach, and I believe it works to the game’s benefit. Just let the gameplay speak for itself, and what’s here works.

Truth be told, I’ve spent time with ball-rolling games that played much worse than Marble Maid. Quite a few, to be honest, but I enjoyed those titles in spite of the wonky controls. It’s clear a lot of time was put into marble control with Marble Maid, and I really appreciate that. You never feel like you’re heading in a direction you didn’t mean to, and you very rarely fight against the physics. There will be an odd moment here or there where you struggle to get up an incline or around a wall, but it’s very few and far between. If you’ve played a Sonic game, you certainly know the physics struggles I’m referring to. Those moments still happen in Sonic games to this day, but they’re almost never an issue in Marble Maid.

Unlike most marble games, Marble Maid also makes liberal use of a jump button. There have been some titles in the genre that use a jumping mechanic, and sometimes I feel it takes away from the fun. Again, it seems Marble Maid was built with the jumping mechanic in mind from the start, so it works really well here. There’s a lot of fun platforming elements scattered about, but they all work hand-in-hand with the marble rolling, rather than being used as a way to skip over rolling sections. There’s no doubt speedrunners could get a lot of mileage out of jumping, but for the everyday player like me, the mixture of jumping and rolling felt just right. 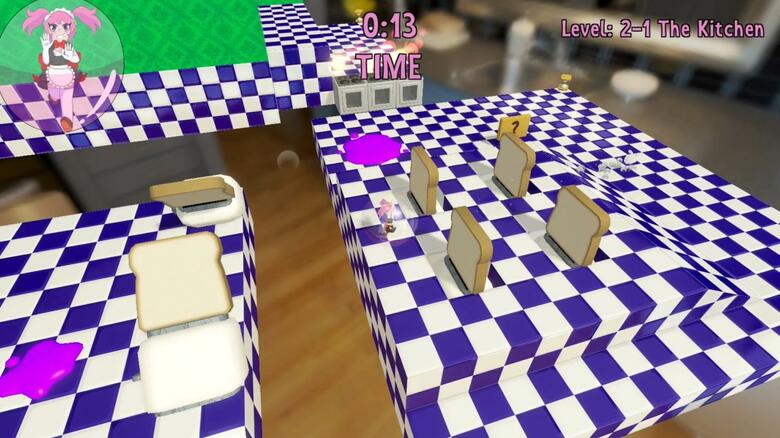 By and large, the stage design and levels in Marble Maid are quite enjoyable. Every single stage is a quick romp, so almost nothing overstays its welcome. I say almost because there’s one stage type in particular that I really didn’t like. Some stages take place in the dark, and you have to skirt by candelabras to light locations up. These levels are simply too dark even after you light them up. Even worse, the lights only stay on for a short amount of time. If you spend too much time figuring out where to go, you’ll soon be in the dark even more, both literally and figuratively. Unfortunately, there’s a decent amount of these dark stages. I don’t outright hate them, but in my opinion, they are definitely the lowest point of the game.

Outside of these bummer stages, the only other gameplay element that didn’t sit right with me were boss fights. They are leagues beyond the dark stages in terms of fun, but they still feel like they could have been fleshed out a bit more. Every boss stage features the same boss with a few new tricks, but all you have to do is avoid the attacks and get the boss to roll off the stage three times. There’s room for improvement here, as I do think the boss mechanic could work, but what you’re given feels like it was tacked on, rather than planned out.

The no-frills approach I mentioned earlier is also seen in the game’s visuals and audio. Marble Maid’s graphics get the job done, but I wouldn’t say they’re anything to write home about. The same goes for the game’s music, which has a few tunes that are all right, and many others that do nothing more than fill the background. It would have been nice to see enhanced visuals and a more memorable soundtrack, but for a budget title that’s just $10, I think what we get is absolutely fine at best, and serviceable at worst. 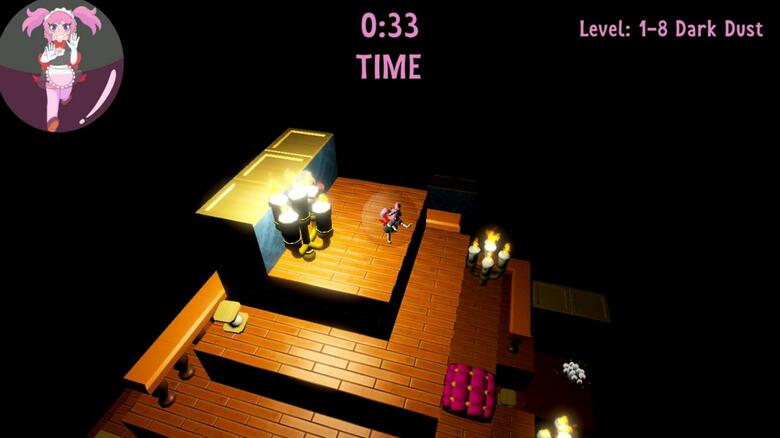 Lastly, I obviously have to mention Marble Maid’s most blant feature, the lewd content. The vast majority of this content doesn’t pop up in gameplay, but instead awaits in a gallery in the hub world. The more stages you play through and dust bunnies you collect, the more lewd artwork you’ll unlock (both official and fan-art included). The game constantly tells you when you’ve unlocked a new piece of art, and you can roll over to the gallery anytime you want to give it a look.

It’s my understanding that the Switch version of Marble Maid is a somewhat censored version of what you can get in the PC version. That said, what you do unlock here is 100% for adult eyes only, as there’s nudity and some very suggestive poses/situations. Please note that this lewd content makes Marble Maid a game for those 17 and over only, as it’s rated Mature by the ESRB for nudity and sexual content.

I take no issue with ‘adult’ content in games, but in the case of Marble Maid, it’s somewhat disappointing to see it included. This is an extremely competent marble-rolling game; arguably one of the better ones out there. When you factor in the $10 price point, it makes the package that much more impressive. I really wish there were two versions of this game released on the Switch; one as the game is now, and another devoid of any lewd content so all fans of the genre could give it a go. That said, the developers of Marble Maid had a vision for their game, and I respect their right to craft the experience they wanted. 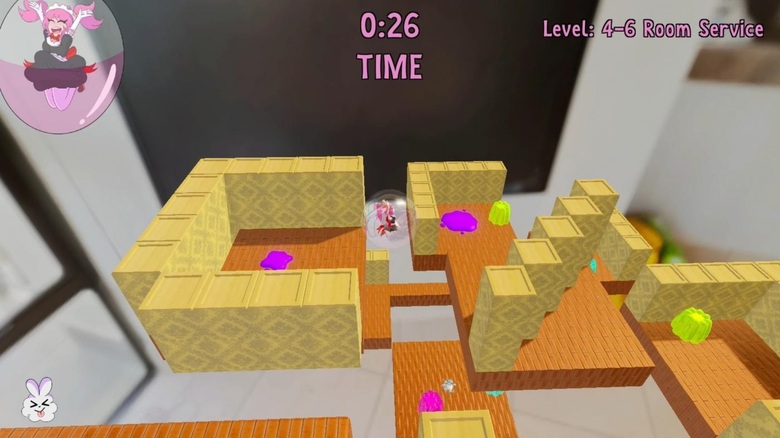 This leap of faith takes some balls

If you are of the 17 and over crowd and are fond of games like Super Monkey Ball or Kororinpa, I really do recommend Marble Maid. It’s not as polished in terms of presentation as those franchises, but it gets the main gameplay mechanic right, and it’s a good deal of fun. Like I said, the $10 asking price really sweetens the deal, and makes Marble Maid seem like somewhat of a steal. With all those elements taken into account, consider me a fan.

Here’s to hoping for a sequel that both livens up the presentation and includes a family-friendly option.