Looking for a new perspective? 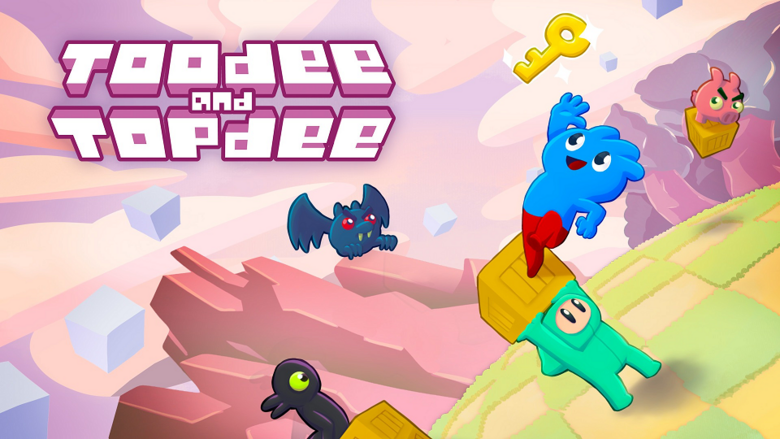 When you break video games down to their most abstract, they are essentially sets of rules. You interact with the game by abiding by and eventually mastering the rules in a way that lets you progress or otherwise have fun. Toodee and Topdee pushes that abstract nature of video games to the forefront by combining two styles of games into one, bringing with it all the rules and conventions that come with each. Ultimately, the game represents the nature of making games and the experimental ideas that spring from it. Much like any two-headed chimera born of forbidden science, the experiment largely succeeds, even if it comes with some resulting identity issues.

Introductions may be in order. In Toodee and Topdee, you switch between the titular characters in order to solve puzzles. Toodee exists in a flat, side-scroller view you’d expect to see from any 2D platformer on the market, while changing to Topdee shifts your perspective to an isometric top-down view. Hence their names, I think. Not sure where the “dee” factors in for Topdee, I guess if you say “top-down” there’s a D in there, but no one says “TopD.” On a related note, while normally you can call me Jack, since we’re naming ourselves after our perspectives today, for this review you can call me Pedantic.

While the character you control alters your perspective on each challenge, the puzzles don’t usually revolve around the literal changes that the new viewpoint brings. Instead, each character represents their own ruleset with their own logic. 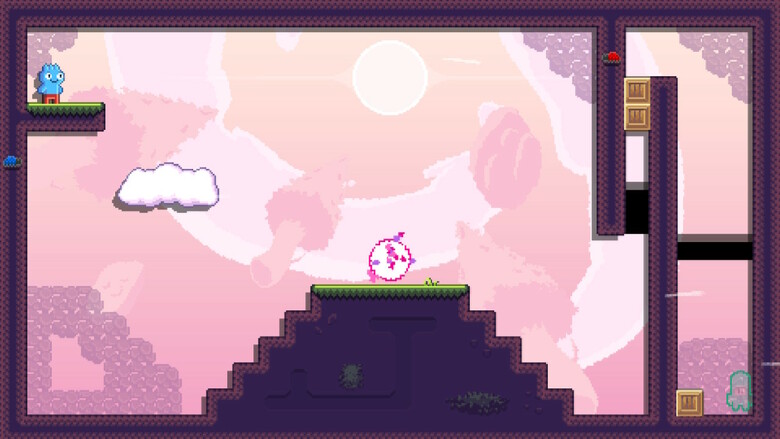 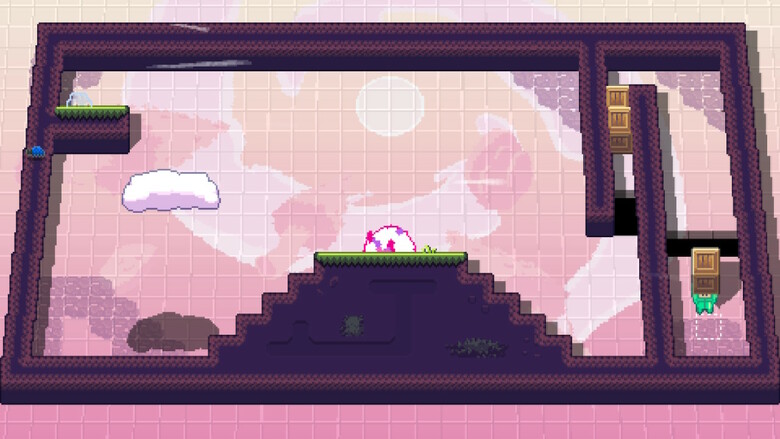 TOPDEE MODE - JUST LIKE PLAYING THE REAL GAME!!!
View All

Dedication to game logic makes sense, as the game themes itself around the very idea of programming games. The worlds of Toodee and Topdee fall apart because a semicolon goes missing. Glitches and exceptions run amok. A narrative exists, yet it gets treated more as an excuse to be silly and make programming jokes more than anything else. Clearly this is a video game made by people who make video games. How is that for some insightful reviewing, huh?

Game logic doesn’t always follow real world logic, so the puzzles don’t test you in a straightforward manner. You may initially be able to envision solutions for each level at glance, but that doesn’t last forever. Eventually, you will need to know the rules of how you can interact with the world, enemies, and objects before reaching a solution. Sometimes the “rules’’ take some experimentation to suss out. The “fun” in Toodee and Topdee comes from figuring out the specifics of these rules and how they can be bent.

For example, you might see an enemy move back and forth in a set pattern as Toodee, only to discover that the enemy now homes in on you when you switch to Topdee. You may know that you need to collect a key to unlock the exit to the level, but find yourself unable to collect it. Only by trying out your options and manipulating the enemies will you discover the properties of the gamer world and open up possibilities to solve both the current level and many more to follow.

The discovery process connects the player directly to the thought process that goes into developing a game. Sometimes only by goofing around and discovering things by accident can a truly interesting game mechanic or fun idea emerge. Toodee and Topdee tells this tale both in its literal story and in the task of making your way through each stage. Testing your possibilities and using that knowledge to progress forms the core of what makes Toodee and Topdee an interesting experience.

Puzzles head up the strengths of Toodee and Topdee, but as previously noted, the game possesses two heads, and I care a lot less for the other one. You may think the heads are the characters themselves; the types of games they represent, but that’s not quite the case.

With the large emphasis placed on testing rules and solving puzzles, it may not be obvious that Toodee and Topdee also wants to be an action game. A little bit, anyway. The boss battles at the end of each world hint at it, yet those hints can be easily ignored since they are special occasions. The action elements do not fully reveal themselves until about four (out of five) worlds into the game. At this point, I noticed a gradual shift in what the game was testing. 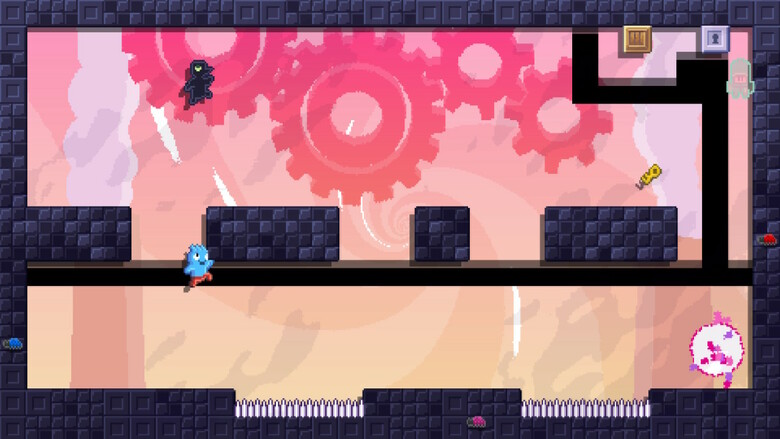 The challenge that best demonstrates what I mean involves a shadowy doppelganger that mimics your every move. The “puzzle” feels pretty simple – it’s not the point. Since you can switch between characters, you can manipulate the doppelganger by using Toodee to make horizontal progress while Topdee vertically readjusts its height while jumping, allowing it to cross gaps that would be impossible by simply mimicking Toodee alone.

Figuring out the gimmick took me about ten seconds, so completing it should theoretically be simple. Not so. I spent more time on this level than any other part of the game, and that boils down to what this level really tests: the precision of your inputs and timing. If you’re not placing yourself just right, holding your jumps long enough, or timing your transitions between the characters, you’re going to end up with a death or an impossible situation requiring a restart.

This level reveals the dark side of testing out game mechanics as the core part of your design. There’s no clever trick or puzzle here. You just try it over and over with minor variations in the timing of your inputs until you do it correctly. You can distill all action games that way, sure, yet the way it is presented and designed here comes across as particularly mindless and unengaging.

Nothing afterwards stopped me in my tracks quite like that again, yet the action element pervades the rest of the game. It becomes easier and easier to die or lock yourself out of completing levels due to minor input mistakes, usually at the eleventh hour of the stage in order to make it more frustrating.

To clarify, I don’t have a problem with a game increasing its difficulty. Everything in this game can be completed with a little practice and patience so it’s not that I ever felt the challenge was insurmountable. The real problem lies in that I find precision to be a poor partner for the kind of game Toodee and Topdee had made me think it was. I began to think about what this game really does well and what holds it back.

No particular sequence that tests your action skills stood out to me as particularly compelling, and the consequence for messing up was often harsh enough to be annoying. When you spend most of a level setting up the same steps to complete a puzzle only to keep dying at the last part, you eventually grow numb to the experience as a whole. In many levels, I reached a point where the fun part was effectively over, and everything after that felt like banging my head against a wall until I could get to the next fun part. Toodee and Topdee excels when the player works their way through the solutions, not so much when executing those solutions. 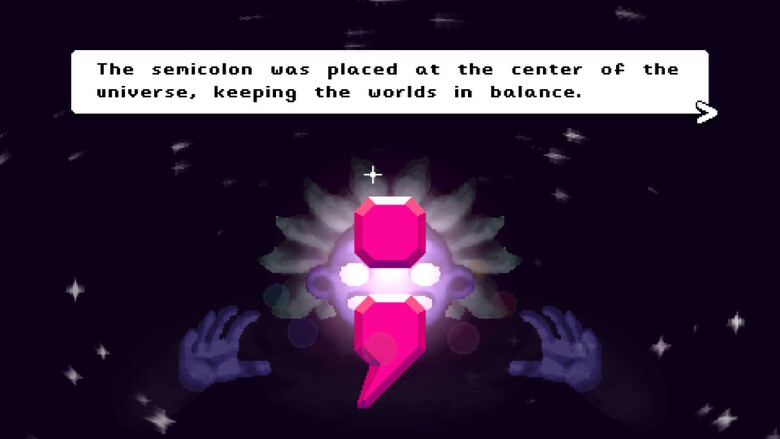 I should note that Toodee and Topdee offers a plethora of cheat options should you choose to partake. Unfortunately, I did not find that any of the options offered solved my main issue. These aspects simply don’t complement each other, and the craftsmanship in the action sections simply don’t justify their inclusion.

All that said, I don’t want to take too much away from the results of the Toodee and Topdee experiment. It can be uneven, I imagine having two heads does not help with balance, yet it remains compelling as an exploration of the rules that make up games and designing them. Two heads may not always be better than one, but I appreciate the whole of the experience just the same.