You Gotta Fight for Your Right to Farm! 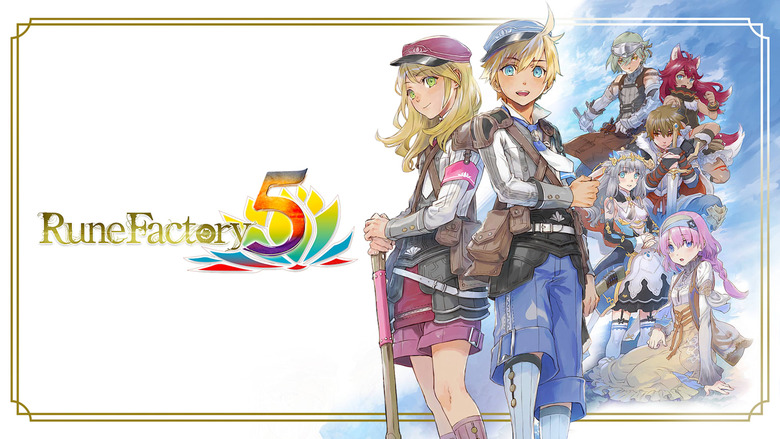 Are you burned out on Animal Crossing: New Horizons? Passed the 1,000 hour mark in Stardew Valley, and found your heart’s just not in it anymore? Fear not, Switch gamers, because Rune Factory 5 is just around the corner from a March 25th release in North America.

It’s been nearly a decade since the last new entry in this farming/dating/monster fighting series, and fans are definitely eager for something new to wrap their thumbs around. Previously known as a franchise that would only debut on portables, Rune Factory 5 is the first mainline entry built from the ground up for a console. This shift has paved the way for enhanced graphics, a fully 3D camera, and a whole host of both new and returning elements. 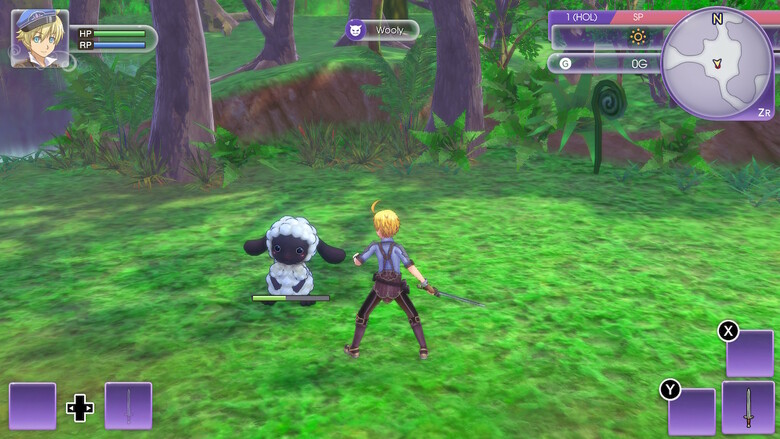 You wouldn't really hurt that little guy, would you?

Set in the town of Rigbarth, Rune Factory 5 puts you in the role of a valiant new hero who has lost their memory. While you’re able to choose between playing as a male or female character this time around, your choice won’t have any major impact on the game’s storyline or dialogue. After making this choice, your character will be woken up and given the task of rescuing a young girl from a group of terrifying monsters called Woolies. Woolies appear as adorable sheep-like creatures, but they clearly have a dark side.

Right off the bat, it’s clear that this isn’t just a typical farming sim. You’re going to need to brush up on monster fighting skills in order to get by in Rigbarth. Thankfully, the first couple of hours in Rune Factory 5 act as an extended tutorial to help you get your bearings. There’s certainly a lot to learn, but even if you’re a newcomer, this tutorial process should set you straight. 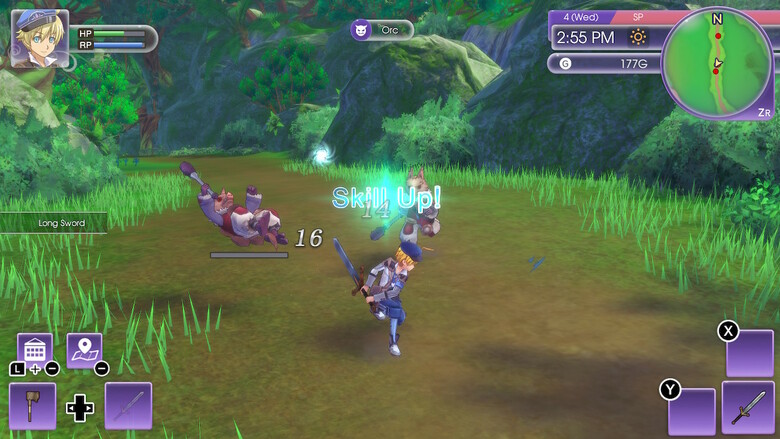 Sorry, Orc, but it was either you or me.

Rune Factory 5’s combat is a simple affair, at least at the start. You’ll have access to a wide variety of weapons, all with stats tied to attack power and special combat effects. Using the L button will bring up your weapon menu, which lets you easily compare and contrast your combat options. Once you’ve picked your weapon of choice, pressing the B unleashes attacks on your enemies. You also have a dash move (R button) to speed out of the way of an attack, or towards an enemy with a follow-up of your own.

Most of your combat will be up against groups of minions such as orcs, goblins, or the nefarious, yet endearing Woolies. Grinding against these beasts will reward you with experience points, access to new abilities, and safe passage to item-filled treasure chests. Dungeons will challenge your combat skills further via a series of confined areas that require you to defeat a deluge of enemies to progress. To do this, you’ll have to take down their spawn portals; nebulous glowing spheres that disappear if they take enough damage. There’s also a boss monster at the end of each dungeon, replete with their own set of unique skills. 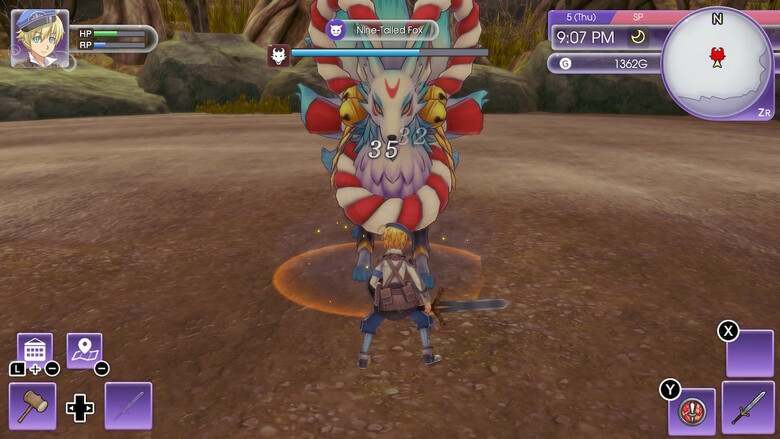 The game's first boss won't really challenge you, but it is pretty!

Soon after your trials by combat, you’ll gain access to Rune Abilities; special powers used during combat that you assign to the X or Y buttons. Your first one will be ‘Dash Slash,’ which allows you to zoom forward rapidly and carry out an attack. These abilities (along with your basic attacks) will consume some of your Rune Points (RP), which is Rune Factory’s version of stamina. Let the RP gauge run out, and actions will start cutting into your Health Points (HP) instead. Lose all your HP and you’ll wind up at the town clinic, which could cost you some serious money if it happens often.

You’ll be able to find a variety of upgradeable weapons, as well new Rune Abilities over the course of the game. Those new weapons include more than just the basic sword you start out with. For instance, magic rods can be equipped, which let you shoot out fireballs and reduce the amount of RP used by Rune Abilities. While not exactly Dark Souls in terms of depth, there is some nuance to the fighting system, and things get even more multifaceted as you venture forward.

Once you successfully complete the initial rescue mission, you’ll find yourself in the main part of town, and it’s here you’ll meet some of the game’s colorful cast of characters. If you weren’t clued in to Rune Factory’s anime influences after viewing its catchy, animated intro (seen above), you’ll definitely recognize them when conversing with town residents. There’s Murakumo and Fuuka, human/wolf hybrids; Cecil, the boy detective; and my personal favorite, Simone, the town’s eyepatch-donning doctor/mayor. That’s right, Simone pulls double duty as both the doctor and mayor in town. Talk about job security!

With all these characters, there’s plenty of dialogue to read through in Rune Factory 5, along with numerous interpersonal character relationships to discover and develop. While the game is not fully voice acted, there are enough voice lines peppered in to keep things lively (with a choice of English or Japanese audio available). In the early part of the game you won’t do too much socializing, but you will learn the importance of chatting with everyone in town, giving them presents, and taking on their requests via the town bulletin board. New quests will be posted by the residents every day, with different rewards attached for completing them. In other words, if you’re looking for guidance and purpose, the town bulletin board is the place to go.

Your new home in Rigbarth is the town defense outpost, which is run by Seed - protectors of the realm and general do-gooders. Just like most real-world businesses these days, Seed is having trouble finding new employees, so they form a working relationship with you in exchange for room and board. In addition to sending you out on dungeon-faring rescue missions, Seed will also require your assistance with another key component of the game; farming! 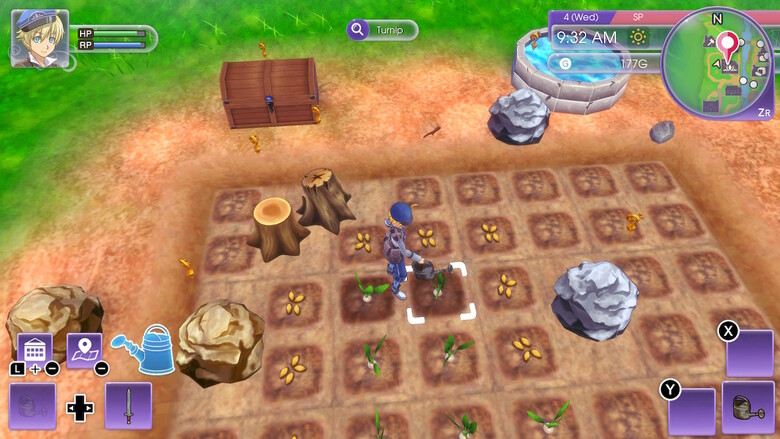 At the outset, your only farmland will be a small field blocked off by stumps, rocks, and various debris. It doesn’t take long before you’re able to clear it out and get full access to the soil. Farming uses the same L menu as combat to switch between tools like the hoe, sickle, and watering can. (Be careful that you don’t accidentally take your sword out and start stabbing some turnips.) After tilling the soil, you can sow seeds for all sorts of veggies and plantlife. Water your crops each day to ensure they’ll grow big and strong, then sell them off for a profit, cook a meal, or offer them as a gift for a friend. How to best make use of these resources you cultivate is entirely up to you.

Just as with combat, every action you take while farming (tilling, watering, etc.) uses up a little bit of your RP gauge. You can always recover your Rune Points by consuming certain foods or medicines, taking a bath at the local inn, or simply waiting for them to fill up automatically by standing still. Just remember, the in-game clock keeps ticking away as you play! Much like previous installments in the franchise, Rune Factory 5 has its own system of time, complete with a day/night cycle. Stay up too late and you might get sick. Lose track of time exploring, and that shop you meant to visit will be closed for the day. Time management, along with the RP gauge, make it necessary to carefully plan out daily actions. 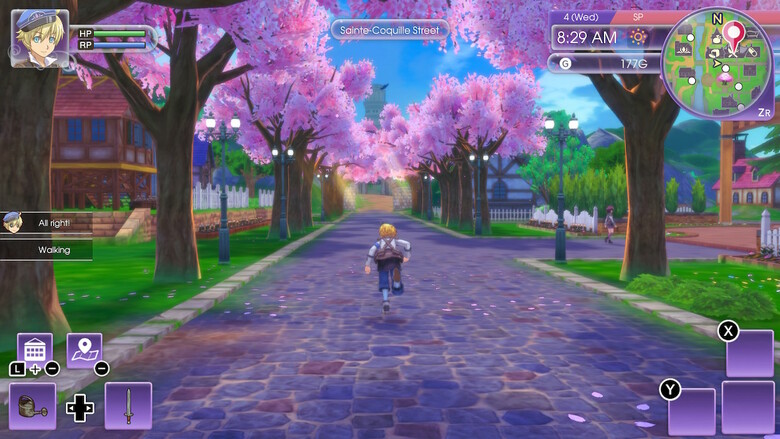 There are no noisy cars to crowd Rigbarth! This town is strictly for walking.

One of the biggest changes in the fifth Rune Factory game is a literal change of perspective. Now set in a fully 3D world, you’re able to move the camera freely around your character. When working on your farm, however, the default setting still swaps the camera to an overhead perspective, making it easier to see what you’re doing. The colorful, anime-influenced look of the world and its characters is still on full display, albeit now in a bigger, and arguably more immersive environment. If you find this bigger world tough to navigate at first, you can always reference the handy map screen, which tracks the movements and whereabouts of everyone in town. Finally, the map also includes fast-travel to any location you previously visited.

Despite the considerable map size and geography, Rune Factory 5 runs fine most of the time. That said, there are some noticeable moments of slowdown, mostly seen when exiting buildings, and in battles with particularly large groups of enemies. The good news is that a Day-One patch has been confirmed, so hopefully that will help improve these issues. 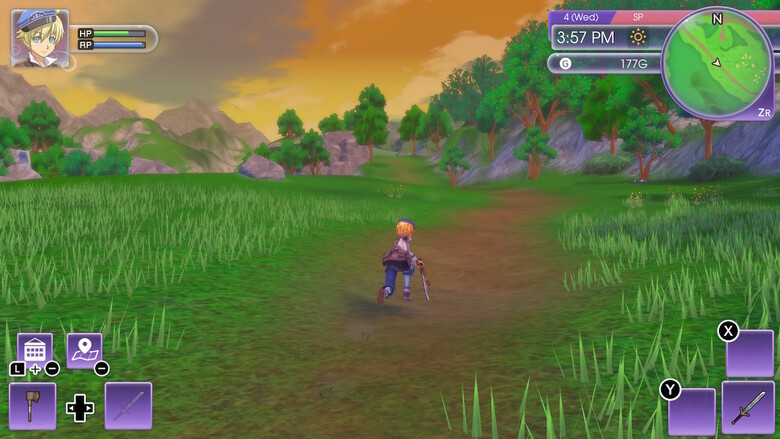 What adventure awaits you in this new world?

This preview covers the first few hours of the game, and while there was plenty to experience, it feels like I’ve only scratched the surface. These early hours provide introductory quests, details on forging new weapons, recipe discoveries, the basics on building and arranging furniture, Seed Point information, and more. There’s so much to experience early on, and it can leave you feeling overwhelmed. Fortunately, these elements are introduced in a welcoming manner, and there isn’t too much pressure to master everything right away. This is important, because a host of other features await later in the game, such as capturing monsters, fighting alongside companions, and of course, marriage. Needless to say, Rune Factory 5 already seems like a game you can sink countless hours into.

Quence is a writer, YouTuber, and snack cookie critic. He currently lives on the Internet. You can find more of his writing (and videos) about games and other media at JonathanEstis.com.