REVIEW: The Centennial Case: A Shijima Story Keeps You at Arm’s Length

Not exactly a cold case, but... 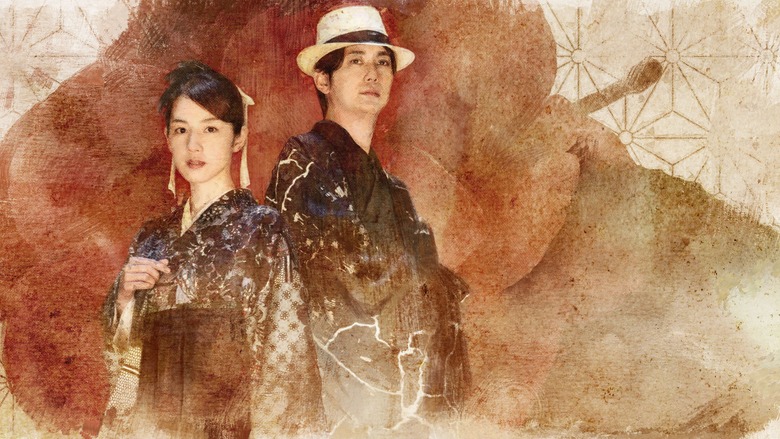 Mysteries and video games have a special kind of relationship. You might say they are the Romeo and Juliet of broadly defined concepts. They share many similarities (my pal Sherlock tells me that mysteries are a kind of game) yet are frequently kept apart by forces outside their control. People, at least in-game, also always seem to die horribly whenever they come together. An infallible analogy, I know.

That separation aspect often leads to mystery games challenging the notion of what someone might consider a video game at all. Some include mini games that interpret the mystery solving into something more traditional, while others prefer to be novels that lean on audio and visuals to enhance the experience. The Centennial Case: A Shijima Story resides somewhere in the gap between. You are not excluded from the mystery-solving process here, it simply keeps you at arm’s length.

The Centennial Case draws you into its mystery scenarios with live-action movie scenes. Live action footage has been used for plenty of other games in the past, but typically as an aesthetic. Whether it’s pointing and clicking on things or simply making decisions to change how the story unfolds, usually the player still has the opportunity to interact with the world in front of them. That’s not the case here. For The Centennial Case, you are in fact watching a movie with no true way of interacting with what’s on-screen most of the time.

It’s a fun movie, to be clear. As the title of the game suggests, the story revolves around a case rooted in events that took place a century prior to the story of the game. This means that while you have a main setting and cast of characters, the game actually has you solving cases through a variety of different time periods in order to reach the final truth hiding in the present day. I mean the present day literally. The game places everything that occurs on a timeline, including major historical events like world wars and important research discoveries. I took physical damage when I saw that the COVID outbreak was on there!

The narrative itself explores the concepts of life, family, and potential immortality. These aren’t just interesting themes for the story, they actually add to the mystery as well. The game uses the same pool of actors to portray the different casts throughout all the eras the mysteries are set in. At the outset, however, the game floats the idea that each mystery ties back to a family lineage that may have discovered immortality. This premise consistently keeps questions in the back of your head: is there a real relation between the different people an actor depicts? Are they simply family members? Or could they even be depicting the same person every time? 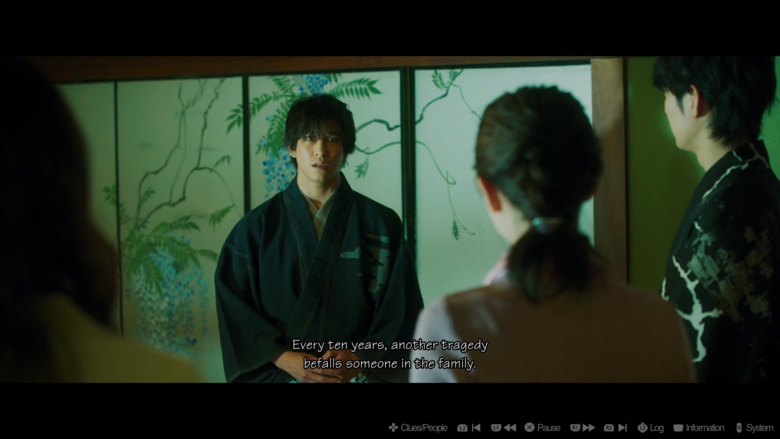 More than any of the individual cases you solve, The Centennial Case’s narrative triumphs most with its overarching story and themes. Each mystery presents itself as a short story, but most of the time my main focus was on piecing them together as a whole.

That’s not to say the individual stories are poor. I enjoy the episodic format of the mysteries, it’s a lot like tuning in for a mystery sketch show. The acting and directing deliver just about everything you could want from that perspective, from dramatic close-ups to hammy monologues where the protagonist slowly reveals who the true killer is.

About the only thing missing would be weirdly gruesome deaths, which I was expecting based on the warning the game provides about its disturbing content when you first boot it up. That warning got me all hyped up for some really messed up stuff to happen, but it’s honestly pretty mild overall. Despite that, the live action performances do a great job of selling the darkness of the story anyway.

So yeah, The Centennial Case. Pretty fun show and/or movie. I’d give it a Rotten Score of 203.7 degrees Fahrenheit. Thanks for reading my review.

Or wait, wasn’t this supposed to be a video game? Yes, I just remembered that despite all of the preceding paragraphs, The Centennial Case happens to be a video game. These darn mystery games are always keeping you on your toes, am I right?

The movie sections set up each mystery. Once the game has given you all your clues, it transitions to what it calls a “cognitive reasoning space.” This may be a fancy term for the protagonist’s brain. I’ll have to consult my autonomic functional guidance matter. 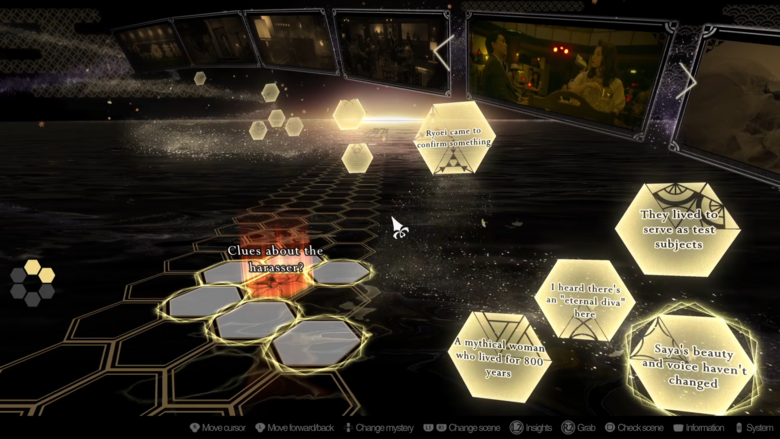 You spend the most of your time here scrolling through a “path of logic” which contains questions that serve as a basis for different hypotheses regarding the mystery at hand. You are given a bunch of keywords at the top corner of the screen based on the footage you viewed, and basically your job is to use those words to answer the questions presented. Personally, I prefer just instantly knowing the answer to everything I ever think about, but I understand everyone’s brain works differently.

Speaking of, I can’t decide if I like this idea or not. The biggest adjustment I had to make when interacting with this system is the idea that you aren’t actually solving anything here. You have to complete some hypotheses to move the story along, but you don’t need to reveal the correct ones. The hypotheses you create are just that: hypotheses, or ways to think about how the mystery unfolded. The majority of them are incorrect, and some are so off-base that I regretted even spending the time required to unlock the possibility. Dragging the clues to the correct hypothesis takes a little longer than I’d like, which doesn’t help.

On one hand, I do like that it really makes you think about the events that occurred thoroughly. On the other, sometimes it feels like you’re filling your head with junk that makes things more confusing than they really are. That might be the point, of course, but after a while it starts to grate.

After the hypothesis phase, you have the option to review any number of questions surrounding the mystery in more detail. I was confused when I first entered this phase because it’s a little aimless. You select a question and a potential answer to it, and then receive a small explanation of why it might be an answer with no real feedback on whether it is in fact the answer. Like the previous phase, this seems to be more about getting you to think about the mystery yourself than anything else.

These phases are interesting exactly because they don’t give you clear-cut answers. Many mystery games carefully lead you down a path of logic as a natural part of their design. You investigate a room for clues then move onto the next one. You answer a question correctly to move onto the next development. That guided process efficiently provides the kind of interactive experience video games specialize in.

Here, you are technically interacting with the game to solve the mystery. It’s just done in a very indirect, almost disconnected manner. It’s like the game dumps a box of jigsaw puzzle pieces on the floor and tells you to solve it, except some of the pieces are fake and you can’t put any of it together in the game itself.

I appreciate the ambiguity to an extent. Going back to the Centennial Case being like a TV show for a second, you can almost treat the game part as supplementary material that assists you in figuring things out yourself before the protagonist unleashes her dramatic revelations upon any nearby bystanders. It made me think about the game’s mysteries in a way no other game I’ve played before has. 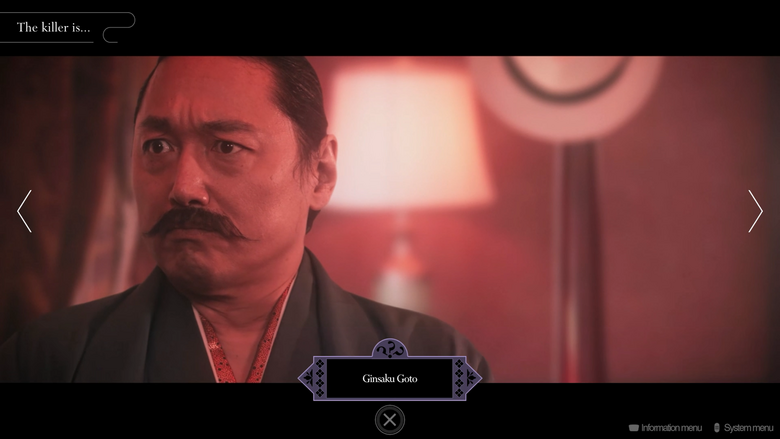 After you complete the previous two phases, you move onto the Solution phase, which functions a little more like you’d expect from a mystery game. The protagonist slowly works through each step of the mystery in front of an audience, and you answer the questions that pop up each step of the way. If you get a question wrong, you get kicked back to the hypothesis phase to review the case again. Although you get penalized for wrong answers by getting points knocked off a ranking system, it’s totally worth it to see the prolonged awkward scenes they filmed for each question you get wrong. This game captures the art of embarrassing yourself in front of a bunch of people in a way that caught me totally off guard.

Barring a late-game mechanical twist, this is your only chance to directly impact how the game progresses, which is strange to think about. It’s always satisfying to solve a mystery, though, and there’s an argument to be made that doing it without clear guidance heightens that satisfaction.

Still, between the long sections of movie watching and the disconnected nature of the parts you actually do interact with, I felt a little distant from the experience as a whole. Visual novels often get lambasted for the lack of “real” gameplay, yet I think there’s something to be said for the act of pressing the A button to progress dialogue. Something as simple as that may be enough to keep you connected to the game. The Centennial Case goes long stretches without even that minor kind of interaction. The times you do interact with it are either indirect or relatively brief.

Between the live action scenes and its interesting spin on mystery mechanics, The Centennial Case keeps things intriguing. The intentional distance it creates between the player and its world, however, forms a formidable gap. It feels like a show you watch over a weekend and generally enjoy, but then find it difficult to remember any of the details of later. It leaves a positive impression, yet perhaps by design, that impression is not a particularly deep one.