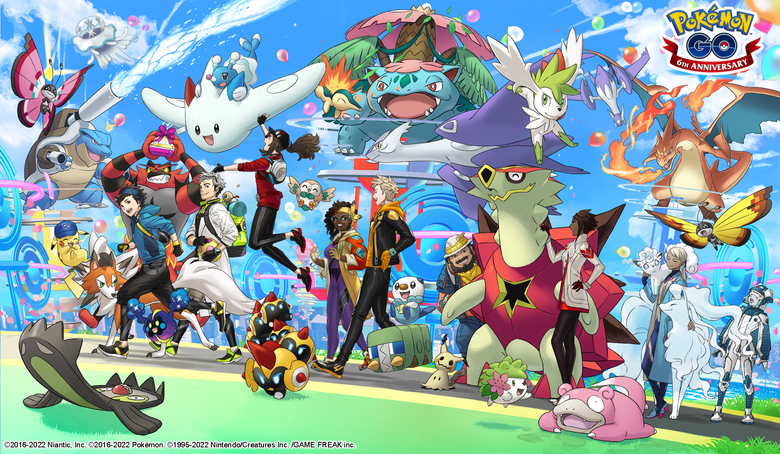 Happy anniversary to Pokémon GO! Today marks six years since Niantic launched this mobile game, which was an enormous success upon release. Early on, plenty of folks assumed the phenomenon would be a passing fad, but time has certainly proven them wrong, as the game is still going strong in 2022.

In celebration of the sixth anniversary, Niantic has shared a brand new piece of anniversary art by artist Yusuke Kozaki (@kymg on Twitter) which you can see above. It features the leaders of teams Instinct, Mystic, and Valor, plus plenty of Pokémon with snazzy accessories.

The celebration doesn’t stop here, as this summer is full of Pokémon GO events happening around the world. Tomorrow marks the start of a special Anniversary Event with new costumes for Charmeleon, Charizard and Pikachu. After that, we’ve got Pokémon GO Fest: Seattle on July 22nd, and Pokémon GO Fest: Sapporo on August 5th. Finally, there’s the global Finale event happening August 27th, with more details on the way soon.

Are you one of the millions still playing Pokémon GO six years later? Celebrate by getting ready for this summer’s numerous events, and let us know what’s kept you engaged with the game all this time.