REVIEW: Azure Striker Gunvolt 3 Cuts to the Heart of Change 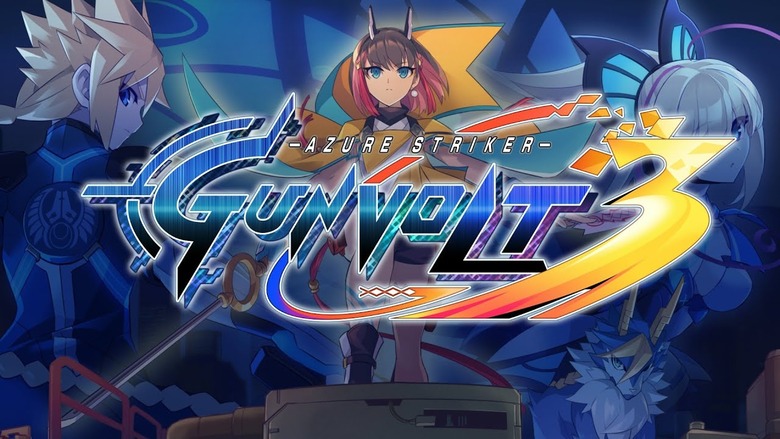 Change can be difficult to accept. It comes whether you want it to or not, and often when you least expect it. You might be happy with how things are going; let’s say, for example, you’ve had a successful career as an electricity-empowered superhuman who shoots guys with darts and zaps them. You go to sleep for a while. When you wake up, decades have passed and you’re feeling a little off. You’re a dog now.

Azure Striker Gunvolt 3 embraces that sudden, disorienting sense of change. Change can bring good things and bad things – it rarely satisfies someone in every possible way. On some level, Gunvolt 3 appears to accept that. It chooses to move forward anyway, looking back only to further justify its advancement. As a longtime fan, Gunvolt 3 does not cover every base I was hoping for it to. It arguably doesn’t do what you might traditionally expect from a sequel at all. Instead, it offers something different, something surprising, and most importantly something that is satisfying in its own way.

Gunvolt as a series never rests on its laurels. The original game took a far different approach to action platforming than its inspiration. Its sequel introduced Copen as a playable character, providing a different twist on the usual Gunvolt experience. Copen went on to star in his own spin-offs that further strayed from the established blueprint of the mainline series, with the sequel going as far as overhauling Copen drastically. All of this is to say that Gunvolt 3 changing things up is not surprising on its own. What surprises me are the nature and extent of the changes.

Up to this point, the general Gunvolt gameplay followed a similar pacing philosophy. No matter how quickly you speed through a stage, Gunvolt (or Copen) will need to stop in order to defeat enemies. You tag an enemy, then you drain their health, and then you move on. Stopping and starting is inherent to the rhythm of Gunvolt.

Gunvolt 3 slices that pacing to pieces. The new Arc Chain mechanic warps you directly into a tagged enemy to destroy them, and that changes how Gunvolt 3 feels to play compared to its predecessors dramatically. You no longer stop. You continually propel yourself forward. This becomes especially apparent when you begin playing for score, which incentivizes staying in the air, only giving you a short window to tag the next enemy before you touch the ground. Arc Chains usher in the core change this game brings to the table: a faster and more visceral experience. 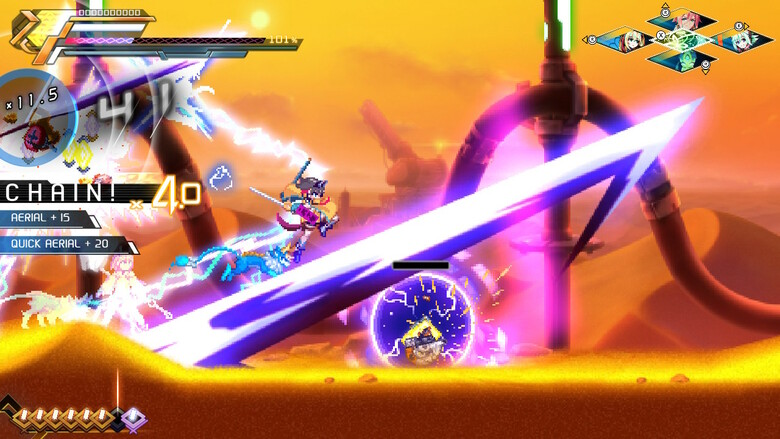 The new protagonist Kirin embodies the visceral nature of the gameplay. On top of the Arc Chain, she utilizes an expanding arsenal of sword techniques that slowly unlock as you progress through the game. Using Kirin’s sword requires you to get relatively close to enemies – a risk you generally don’t need to take in Gunvolt games. Her techniques will also briefly lock her into different animations, so you have to commit to what you input.

Defeating enemies and especially bosses as Kirin requires a fundamentally different approach from Gunvolt. After tagging an enemy, Gunvolt could simply keep his distance in order to focus on dodging attacks while draining his enemies’ health. Kirin constantly places herself in harm’s way. Kirin’s swordplay offers a compelling new twist to the Gunvolt formula, in some ways evoking the developer’s past Mega Man titles while also not conflicting with Gunvolt’s core enemy design.

I appreciate how different Kirin feels from anything the series has done up to this point. Copen’s differences from Gunvolt were more apparent in the level design and movement mechanics than the enemy encounters. In battle, Copen still tags an enemy and focuses on dodging. His appearance in Luminous Avenger iX 2 leans a little closer to the in-your-face antics of Kirin, yet differs greatly in its execution. With Kirin, you feel the difference in how fluidly she fights. Kirin strikes an overall interesting and satisfying counterbalance to the usual Gunvolt combat.

Speaking of Gunvolt, he is in this game too. He just doesn’t play the role you might expect from a game’s namesake. Instead, he is essentially a sidekick, a cheat mode, and the heart of the game all in one. Allow me to explain.

Gunvolt and Kirin work as partners. Kirin generally plays the role of the “main” character, while Gunvolt supports her as a canine companion (don’t worry about the details of that). In-universe, Gunvolt powers up Kirin, allowing her to do techniques like the Arc Chain. His wisdom and experience keeps the otherwise brash and boisterous Kirin relatively level-headed. They share a nice dynamic and Gunvolt is a surprisingly natural fit as a mentor. My guess, however, is that most people playing a Gunvolt game are hoping for Gunvolt to be more…well, playable. That’s certainly what I would expect. 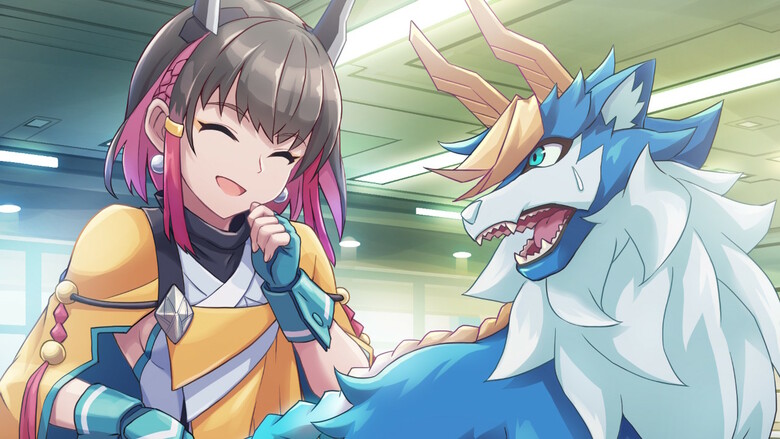 The good news is you can swap between Kirin for Gunvolt, and he’ll even turn back into a human for the occasion. The potentially bad news is that doing so comes with numerous caveats.

In the time since the previous game, Gunvolt’s power evolved to godlike levels. His electricity obliterates enemies. His jumps are infinite. His enemy powerbombs are pretty darn impressive. He really smacks them into the ground hard. That all sounds cool, mostly because it is, but there’s an argument to be made that maybe Gunvolt has become too powerful at this point. It’s an argument that the game itself makes by tying his use to a meter that gradually depletes. This meter above all else solidifies Gunvolt’s supporting role in the gameplay.

As is, Gunvolt may best be thought of as a cheat or last resort to use when things get difficult. I found him to be most useful during particularly difficult platforming situations, which Gunvolt 3 contains noticeably more of compared to its predecessors. His infinite jumps make short work of the elaborate scenarios crafted by the level designers.

Using Gunvolt in this way almost feels like a waste. The Arc Chain mechanic not only speeds up the game, it also allows for interesting platforming sections where you must rapidly tag enemies or objects in order to traverse long halls over bottomless pits or vertical shafts. The mechanic gives a more skill-intensive and technical twist to the platforming that isn’t present in other Gunvolt titles.

Scoring also represents another downside to playing as Gunvolt. By the game’s own admission, Gunvolt earns less points than Kirin. It amusingly explains that there’s really nothing that impressive about someone as powerful as Gunvolt doing cool stuff. While true, I am a little disappointed by that. Gunvolt as a series primarily relies on scoring to incentivize replays and Gunvolt 3 is no exception. It truly feels like you have no reason to use Gunvolt at all once you’ve grown past a certain skill level.

I wrote above about this all being “potentially” bad news because I also see the potential good in Gunvolt’s role here. He’s an interesting way to give beginners an out and make them feel powerful. The developers clearly wanted the gameplay focus to land primarily on Kirin anyway, who carries the tagging and scoring spirit of Gunvolt in a new direction. 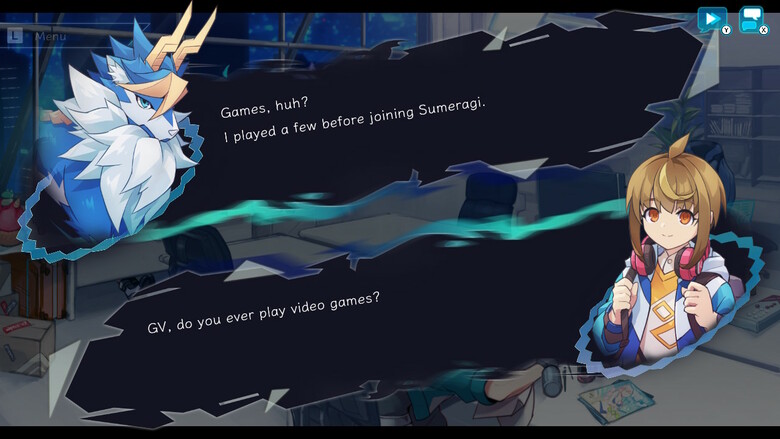 As a potential olive branch to the Gunvolt diehards, there is an unlockable way to make the game more Gunvolt-centric. Unfortunately, I don’t think it fits the bill. This unlockable limits your Gunvolt play in slightly different yet overall similar ways to the normal version of the game, and some of the levels aren’t even designed to accommodate those limits. It can be fun, it just doesn’t replace a truly Gunvolt-centric game. Personally, I would have settled for an incentive for more experienced players to use him in the normal game, perhaps doing more to encourage swapping between the two characters.

I don’t want to discount the true value of Gunvolt’s presence in this game, however. He may act as a sidekick and a crutch, but he is also the beating heart of everything this game is about: change.

Longtime Gunvolt players know that Gunvolt generally has a rough time in his games, and Gunvolt 3’s scenario may be the most bittersweet in the series. Narratively, Gunvolt 3 effectively soft-reboots the story by pushing its events far forward into the future. Gunvolt now exists as a man out of time. What little he had left to lose is long gone. Even so, he carries on and continues his fight for a better future.

This development is as compelling as it is disorienting. If you were hoping for a straightforward follow-up to the previous game’s events, you will not find it here. Gunvolt 3 tells a new tale with new characters and only makes small nods towards what came before.

The story as a whole focuses on Kirin, yet Gunvolt’s perspective is what makes it shine. He has lived a lot, fought a lot, and lost a lot. The ways in which Gunvolt shares all of that accumulated experience with Kirin and her crew can be both amusing and touching. He largely accepts how dramatically his life has changed and has grown for it. He lives up to the mantle of a legendary hero not just in powerset; it is apparent in his attitude as well. Still, he has moments where he’s clearly stuck in the past. Random tangents will suddenly remind Gunvolt of small moments with loved ones, and that’s when he feels most human and relatable. 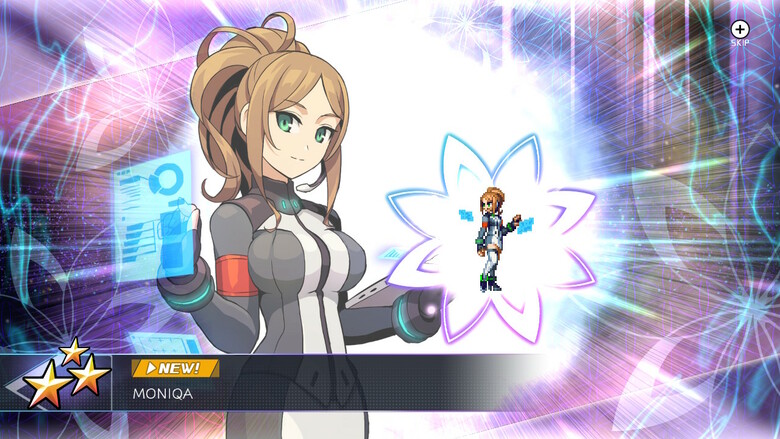 Memories are powerful – no matter how far we come, our memories build up the kind of person we are. That principle manifests literally in the Image Pulse mechanic. With Image Pulse, Gunvolt summons the power of past friends and foes for different power-ups, replacing the crafting and equipment systems of previous games. They function as collectibles that are awarded to you for completing stages, similar to how you used to be awarded materials to craft equipment.

Image Pulse strikes a nice balance between the more convoluted systems of previous mainline games and the more anemic upgrade system of the Luminous Avenger games. The actual usefulness of the powers varies wildly, but the cameos are fun and it’s especially neat to see sprite art of characters who previously never had an in-game appearance. Above all, Image Pulse serves as an interesting way to inject Gunvolt’s character and growth directly into the moment-to-moment gameplay.

Gunvolt 3 melds its story and game mechanics together into a blade that cuts to the heart of change. The core gameplay has changed, Gunvolt’s role has changed, the status quo has changed, even Gunvolt’s status as a biped has changed. Amidst all these changes, however, Gunvolt 3 retains memories of the previous games’ ideas and carries them on in spirit. Change isn’t always what you expect and it isn’t always what you want. If you accept it, however, change can make you stronger and satisfy you in its own way.