Six Months Later: A Q&A with Kit and Krysta

It may be hard to believe but the Kit and Krysta Podcast has been around for six months already. Kit Ellis and Krysta Yang are two beloved figures in the Nintendo Universe, both having worked at the company for a combined 27 years. They became the faces of Nintendo’s PR for many with their weekly Nintendo Minute show that ran on YouTube for over eight years. When fans see that much of you for that long, you build connections and become a very big part of their lives.

When Nintendo Minute put up a Final Episode on December 17, 2021, it was not the Christmas gift many fans were wanting. But thankfully, Kit and Krysta decided to continue working together and have been operating their own YouTube channel and now, six months in, it is going strong with a variety of fresh content every week.

I was able to catch up with them at PAX West in Seattle after they completed their first ever live streamed Podcast episode (complete with a live audience and Q&A) and was able to ask them a handful of questions and reflect on what six months of the Kit and Krysta Podcast has meant to them. 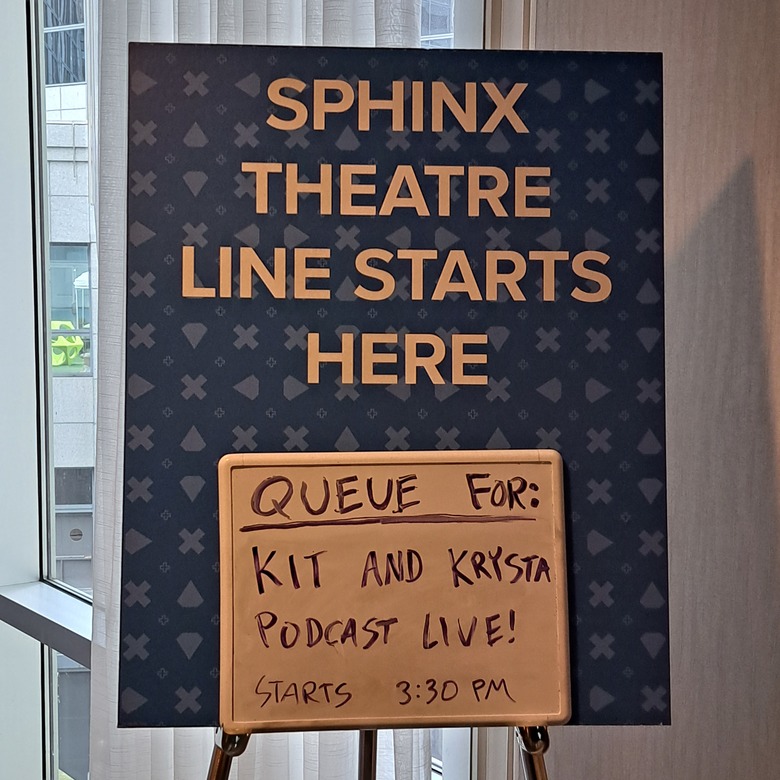 So it’s been (roughly) six months since the debut of the Kit and Krysta Podcast! In that time, you have developed a sizeable and loyal following - many probably carried over from your years at Nintendo on the Nintendo Minute web series, but some I have seen are also brand new since your time at the company. Looking back, were there any challenges of launching an independent podcast that you may not have anticipated?

Kit: Well, we never produced anything on our own. We always had the Nintendo team helping us to do that, so that was a very practical hurdle. We’re good to be “in” the content, but how do you actually make it?

Krysta: Yeah, on the video stuff and the audio stuff, we basically had people doing that for us, so having to learn all those new skills on our own was a bit of a challenge, but I think since then, we’ve grown a lot more comfortable. It’s been a good learning experience.

In hindsight, based on what you guys know now and how you are doing things, Is there anything you guys would do differently starting out based on your experiences so far?

Kit: I think mostly, no, which is great. We did change the name from the Kit and Krysta Show to Super Kit and Krysta 64, and that is one thing that stands out in being different and clear in the naming of all of the stuff that we’re doing.

When word came out that Nintendo was closing the Redwood City offices and you guys decided not to relocate up here to Redmond, Washington, when did the discussion start taking place about continuing to work together on your own? Who’s idea was it and did the other party need any extra convincing to do so?

Kit: That all happened almost about a year ago, which is interesting. That is also about when the conversation started - it was pretty immediate, for both of us.

Krysta: I think we both knew that relocating was not an option for either of us, but we both wanted to keep working with each other. It was really a no-brainer, but it was more so about figuring out the right time when to launch. And going through the emotional part of leaving a job you’ve had for 14 years, you have to mentally get there and be ready to move on to the next chapter with a clear head. The final Nintendo Minute was very emotional for us.

Yeah, I remember when that last video popped up in my sub box and the thumbnail said “Final Episode” just out of the blue without warning, I think most Nintendo Minute fans like myself were just stunned. I know I audibly gasped when I saw it.

Krysta; That was a very hard video to shoot. 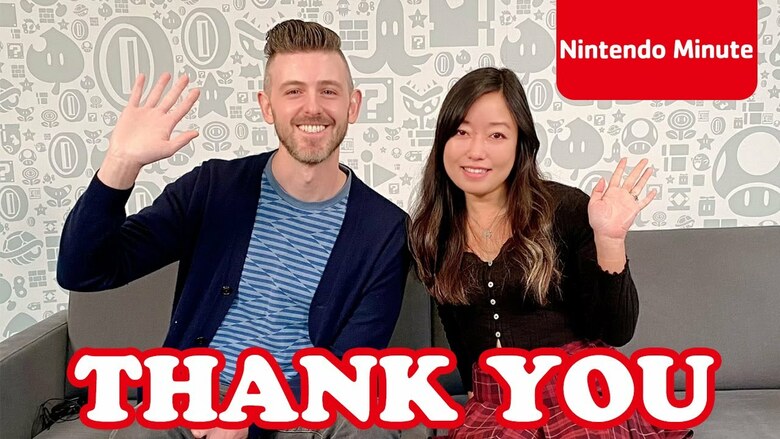 The end of an era

So you recently launched the Super Kit and Krysta 64 Show, a secondary vlog, which aims to really keep the feel of Nintendo Minute alive. The bonus here is being able to explore other areas of the industry and personal experiences outside of the Nintendo bubble. You also do a lot of little YouTube shorts, bonus content for Patreon members and more. How much time a week do you think you devote to making content for the channel as a whole, and does it compare to full time hours you used to have at Nintendo?

Krysta: It’s pretty much a full time job. We usually film on Tuesdays, and that’s pretty much all day. For the rest of the week, we’re just working to edit it and put out that content. It’s a lot of work with all of the promotional stuff around it, whether it be (YouTube) Shorts or other short bits on social media, so it is 100% a full time job.

Krysta: Much more fun, though.

Krysta: It’s way more fun doing the stuff we want to do, versus, like, writing emails to Japan. So I will say that is a clear difference. (laughs)

**I know I’ve learned a lot of fun behind-the-scenes tidbits from the Podcast - one of the most surprising revelations that comes to mind was when it was revealed Krysta had to refilm all of her shopping segments in the Nintendo Minute HQ Shopping Showdown video due to a technical error… knowing that now and rewatching it, you can see little signs of it, but before, nothing at all seemed like it was a reshoot and that was just shocking to me because of how natural it came off.

Is there anything you have shared that, upon reflection, you feel maybe you shouldn’t have, or what is the process of deciding what to talk about and what to keep private?**

Kit: I think we just naturally know what the line not to cross is. There’s certainly a lot of things we know are just off limits, such as gossip or anything as we don’t want the show to be negative, but we do want it to be honest.

Krysta: What we also do is that we really focus on our personal experiences, and keeping it to our perspective on a situation or a memory, and I think that helps keep us on check on not crossing that line as well.

Krysta: We basically have a big long Google Doc about Nintendo Storytime topics at the ready, so having an outline well in advance of topics also helps. We have a great relationship with people at Nintendo, and we want to keep that positive. We will definitely share our honest opinions about stuff but we will never go out of our way to be negative about stuff. 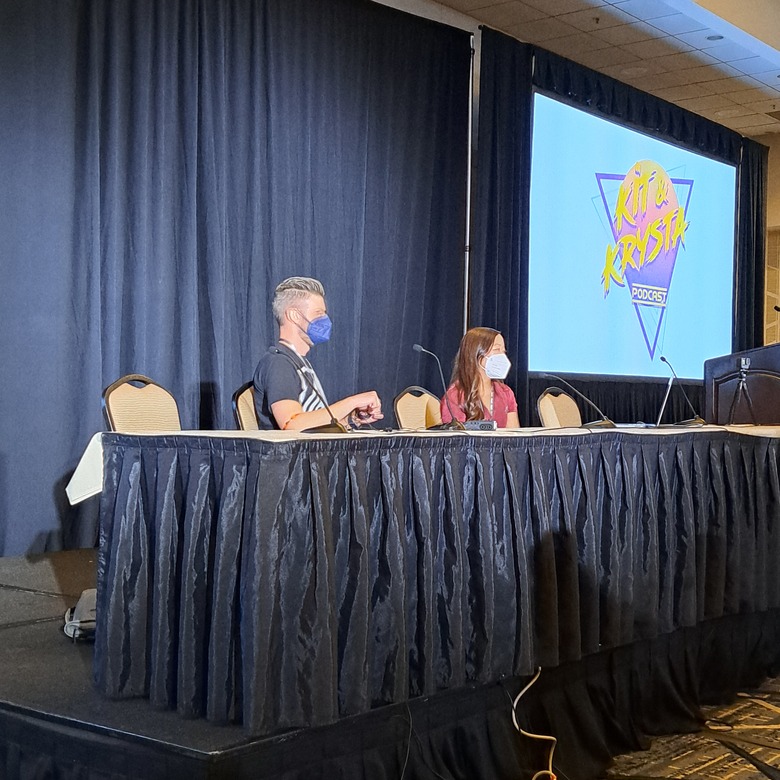 Going on talking about issues that may be controversial, you guys haven’t shied away from sensitive topics, recently talking about your thoughts on the allegations of contracted employee mistreatment. How does it feel to be able to talk freely about stuff like that while also keeping it as non-negative as possible?

Krysta: It feels good. I think we have a certain perspective that is really unique since we worked within the company for so long. And frankly, some of those things that are happening around that are upsetting to us because we have a lot of friends that work there and we want them to have positive experiences on their jobs. I think it’s good for us to share our opinions on it, but again, kind of focusing on the positive or constructive side of it - like what the company can do to improve, versus just having a bad mouthing session.

Speaking of Nintendo (again), without naming any names for privacy, have you gotten any feedback from any of your former co-workers about the podcast?

Krysta: Yeah, all good things! (Kit laughs.) We actually had one of our former co-workers in the audience of the live show! But we’ve heard a lot of positive stuff from people, some who are still at Nintendo, some who have moved on, but it’s all been very encouraging. I’m really grateful for it. 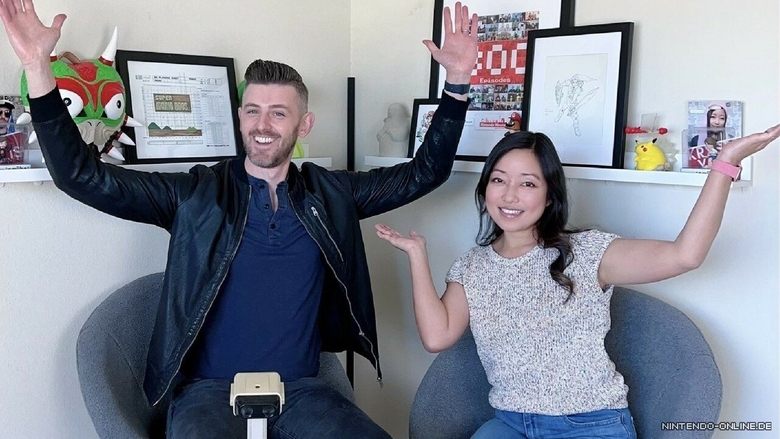 You have a very active Discord and a very vocally supportive community that has rallied behind you since the launch of the podcast. I’m sure you guys were aware of the fan base you had, but this podcast has really brought out such fervent support for you both. Did this whole transition really show you just how much you meant to Nintendo fans?

Kit: Yeah, when that final episode (of Nintendo Minute) came out, we made a point to be together when it was released and we read all the comments together. It was touching and very special.

Kit: We had a good feeling (about the support we had), but that moment of reading the comments as they poured in on that last video was really seeing most of it coming out all at once. So, it’s just really great to be a positive part of people’s lives.

Krysta: And I am so glad we’re able to continue with that. That was the main thing we wanted to do, which was to continue to be with this community. It’s been even better being outside the company because we get a lot more hands-on and one-to-one conversations that we never were able to have at Nintendo.

Krysta: Our Discord, I feel like that is such a surprising place for me. I didn’t really use Discord much before this, but that community is just so much fun. The conversations are super interesting and lively, it’s just developed into a really fun place for everyone. 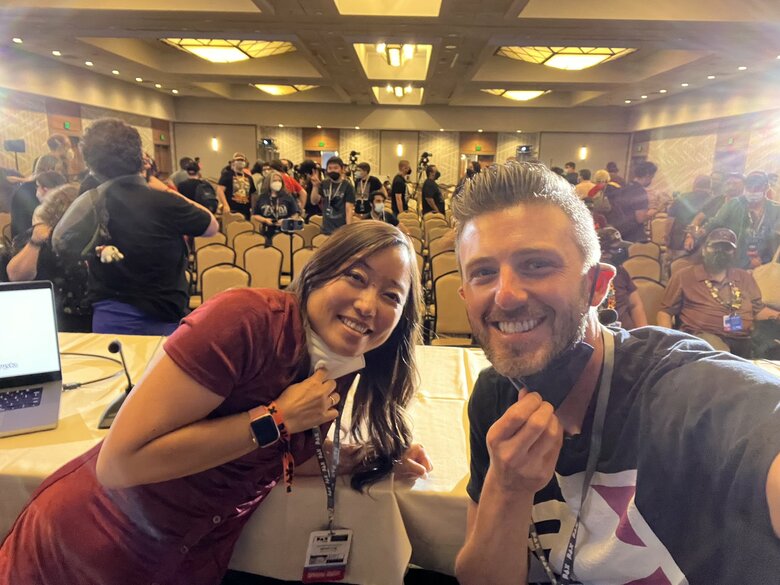 Now for the Standard, uninspired interview wrap-up question! What kind of goals do you have for the future, and what kind of stuff can fans look forward to?

Krysta: We want to build up a good foundation with different kinds of content, but also on the business side, different kinds of revenue streams so we can keep this going. I think a lot of our great Patreon subscribers understand that piece of it, and I hope we can continue to grow this and just do more of it!

Thank you for your time, and congrats on a fantastic Live Show!

Me: Goes to check my voice recorder on my phone.

Krysta: This is the part when you realize it wasn’t recording at all.

Me: (nervous laughter). (Thankfully, it did.)

And learn about their Patreon and Discord community HERE

Hello! My name is Flapjack - Eric being my real name, and I am such a Nintendo fan that I could have easily been born holding an NES controller. I even worked at Nintendo, and I am not even your uncle! I love Animal Crossing and Wii Sports, and am a big fan of anything retro.