Nintendo fans protest announcement of Zelda: Breath of the Wild clone "Genshin Impact" for PS4 by raging at ChinaJoy event 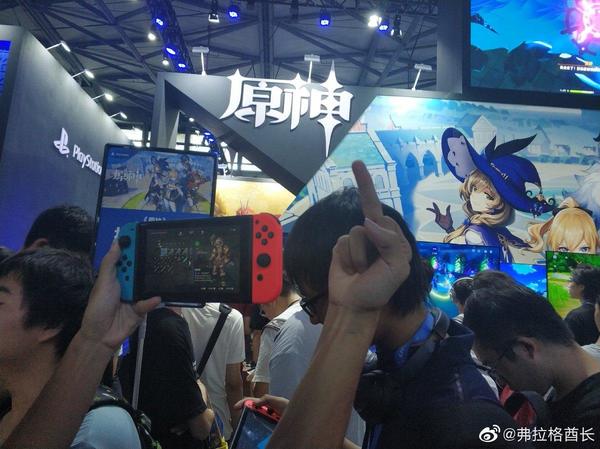 Genshin Impact is a game we've covered on GoNintendo in the past, as it seems to be very heavily inspired by Zelda: Breath of the Wild. Some people claim the game flat-out steals and hits too close to Nintendo's efforts, which left them quite angry about the whole situation. That anger has boiled over at a recent ChinaJoy event.

At ChinaJoy, Genshin Impact was announced for release on PS4, which pushed some fans over the edge. As you can see in the picture above, some Switch owners publicly protested the game's reveal, giving the game's booth the finger. There was even a man who smashed his PS4 over the announcement! This isn't going to change the game releasing on PS4 of course, but it's pretty surprising to see a backlash of this level taking place.

Sony is not going to learn, or even other 3rd parry companies. It’s a disgrace.

That's so funny. I had just seen a trailer a few hours ago of this game and immediately I thought of BOTW. I don't know if Nintendo can sue the developers and Sony for plagiarism.

To be honest, just the art style looks similar, in that it's cell shaded in grass/ruinous areas. Story, combat and world scope look completely different.

There are some other elements too... like climbing rock walls, the way environment objects break, the minimalist piano score, and a lot of the sound effects. But I will agree with you that it seems "different enough".

Does not look that much a like. Sure the art style is a cellshading.
But even the combat with a system of levels looks immensely different.

What plagiarism is there, appart from the aestethic maybe, but still it's their own stuff. And in anycase it's not like China got BotW either as the switch is not there, nor any previous consoles.

I seen enemies that look very similar to Bokoblins, Chuchus and Lynels.

I laughed hard enough to hurt myself.

I think the rage is a bit silly. Yeah, the game is kind of unoriginal, but it won't see the success Breath of the Wild did. It'll probably have about the same impact that Playstation All Starts Smash-like game did.

That's pretty damn stupid. I had no idea what this game is that's being discussed so I had to look up a trailer and I see nothing wrong with it. There's some similarities in the art style, but that's not a crime. I guess even gamers in China can be as whiny as their overseas brethren when they want to be.

It's the culture of our times. It's not enough to put your mind out and criticize but you have to be overtly aggressive about something you don't like.

When your "hobby" stirs you so much, I do wonder if it's still a hobby or if it's awakening other "things".

When your "hobby" stirs you so much, I do wonder if it's still a hobby or if it's awakening other "things".

What do you mean by this? Particularly, can you elaborate on what "awakening other things" means?

I mean if what you like to do to leisure, relax or entertain yourself, makes you irritable, mad, "agressive." I think one does need to rest from that for a bit. When one is enraged he or she doesn't think rationally and can say or do things that they might regret (not saying necessarily something drastic, but something they might regret).

I believe the same thing happens when one passes their vacations in front of a TV. Becoming irritable, and frustrated. Variety is the spice of a healthier life, is all I'm saying.

From what I gather, this is Chinese gamers being upset that this is a major Chinese product that rips off the West. They're sick of China/the Chinese games industry being made fun of for only being able to rip off the West and are using this to protest that. It's basically "You're making our whole country's gaming industry look bad by giving the West ammo to say we're thieves." Meanwhile, the West just sees BoTW with anime women. Different priorities I guess.

I love Zelda, but I just can't get enraged by stuff like this. Just ignore it and let Nintendo's lawyers take care of it.

Art can imitate art. I don't see how the game can impact Zelda's influence.

I personally appreciate copying something like that than having another Museo, Call of Duty, or Souls-like.

I hope it at least has it's own identity in terms of it's game structure.

Edit: Now that I think about it. BotW did take from Minecraft and Elder Scrolls. I know some people criticize that also.

There's a difference between being inspired by others and obviously stealing/Plagiarism. This game seems to be in the "a bit too inspired" category from the trailer. And now that Nintendo are entering China I can see the old grudge between Ninty and Sony might tear up some scars ;)

BotW did a lot of good in game design, so much as that many big devs and pubs straight out said they have to up their game. And that is good for the entire industry. Changing elements here and there and trying to make it look like your own game, is not good for the industry.

Doesn't look like a bad game, but they might have to change a couple of things. Or not.

If the adventure is new, then I think it can be similar.
After all, there is a joy for games being very similar, usually called "spiritual successors". Some games are supposed to be similar for the purpose of expanding it's idea instead of being too different.

I think we need more Zelda Breath of the Wild "clones" as long as it's legal.

I wouldn't call this a "spiritual successor", rather "very inspired of game" or something like that. A bit too inspired perhaps.

When BOTW came out there were so many devs who said "WOW", so it's OK to get inspired, but when copying starts...Nyee..

I think a legal "spiritual successor" can in fact be so similar where the adventure is new (if adventure game) and other stuff changed for obvious reasons. If you agree, but the way they are announcing it isn't "spiritual successor" then oh. But still, this game isn't much different than how Banjo Kazooie copies so much elements from Mario 64, and how many other games have copied so many elements from past games. But that doesn't have to be a bad thing. It's a new adventure as a spiritual expansion from what it looks like so far, basically another "BotW" sort of, which is better than one if the game is legal and good as is.

Well I would look at Yooka Laylee az the spiritual successor to Banjo, really. This game here looks more like they were just very inspired by elements of BOTW. That's how I see it, at least.

I don't understand why the rage is directed at Sony specifically. Are they the publisher? If not, that's like getting mad at Nintendo for Night Trap or some nonsense.

It appears even Link himself is upset over this!

Silly childish behavior over a game. Some people need to get a life.

No doubt it’s heavily, heavily inspired by BotW but there’s no mistaking that it isn’t Zelda. Looks like it has enough of its own thing going on to avoid being a total rip off, even if it’s own thing isn’t terribly unique either.

Shame they haven’t embraced their own creativity more though because it looks like a very well made game...a bit more originality over taking the BotW inspirations so directly would have gone a long way.

EDIT: In fact after watching more footage of it I’d really like to play it myself should a Switch version ever happen. It’s derivative for sure but I love BotW to death- more of the same is no bad thing in my eyes if it’s done well enough. This whole thing reminds me of the Greta van Fleet/Led Zep situation. I’m no fan of either band but if I were a Led Zep fan I’d be happy to have a band making similar music even if they are aping their style. Who cares if it’s derivative if it’s ultimately good and not just straight up plagiarism of the original works.

I've heard this was originally a mobile/PC. As long as it doesn't end up being another Life of Black Tiger, I'm totally OK with this game existing.

This reminds me. We need a 3d Dot Game Heroes remaster for the switch.

China never seems to impress me.

I am curious to see how they react to games that are supposed to be SPIRITUAL SUCCESSORS. Like what about Hazelnut Bastille where it's like Zelda ALttP? Or what about many 3D platformers?

I say Zelda Breath of the Wild is a rip off at Shadow of the Colossus because there are so many similar elements.

It's damn good when people get inspired by other games, art and whatnot. I mean, where would the FPS genre be without Wolfenstein 3D? Platformers without Super Mario Bros...Point and Clicks without Larry or Space Quest? That's all nice and dandy. But, for me, being inspired and obviously copying is different.
Then again, I do love both Super Mario Bros. AND Giana Sisters

I am not defending these idiots. But if you smash your PS4 for this, you have issues.

P.S: look at art. Artists inspire each other. They even teach each other tricks of the trade. You can learn from Michelangelo, but also Dali or even Giger.. But make your own thing from what ypu learned.

Come on, guys. You act like this is something new. Nintendo has always, ALWAYS been imitated by other companies. Super Mario Bros. launched an entire wave of imitators. Mario Kart did too. And Super Smash Bros. And Metroid. (And Tetris, if that counts.) They got their hardware competitors to imitate them too with the D-pad, rumble, touch screen, control sticks, motion control, and portability.

Even WarioWare and Splatoon received imitations too, though none of them really caught on much.

By being copied left and right, Nintendo has been subtly and indirectly moving the video game industry forward. Without Nintendo, you'd probably still be playing video games with a big arcade joystick and a button or two you push with your index finger. I'd say let these guys be heavily inspired by Breath of the Wild. If it fails, then people will move on. If it succeeds, we might see the emergence of a subgenre the way Super Mario Kart and Pokémon did. Don't be like the Sonic fans who look at Freedom Planet and call it a Sonic ripoff.