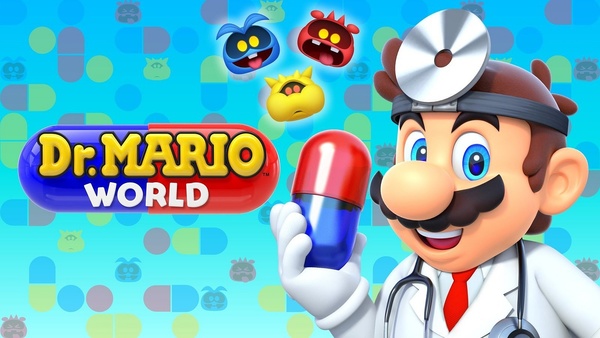 Sensor Tower is back with a look at how Dr. Mario World's first month went. Depending on how you look at the numbers, things are going well, or slowly. Check out the data breakdown below, and decide for yourself.

- made $1.4 million
- downloaded 7.5 million times
- 40% better than the first month from Snoopy Pop, another license-based puzzle game
- 57% more downloads than what Family Guy: Another Freakin’ Mobile Game achieved
- Dr. Mario World has made significantly less money in its first month that any other Nintendo mobile game
- only earned more downloads that Dragalia Lost, which was only available in five markets when it debuted

I downloaded it and played it for an hour or so. It really is a terrible version of Dr. Mario that mainly serves to tarnish the brand. Yikes. I mean I know Nintendo doesn’t want these mobile games cannibalizing their console offerings, but this one may actually cause people to NOT buy future Dr. Mario games.

It’s hard to care about Nintendo mobile sales. They just have that added layer of money before all that the platform is infamous for, that’s now becoming the reputation of the ‘AAA’ console game industry

To tell you the truth, this is more like reverse Virus Buster.

If you don't remember, it's a mode you can find in Arika-developed Dr. Mario games and Brain Age based around touch and pointer controls.

Had to google this because aside from the NES release and the new mobile version I haven't played any other Dr Mario games. I 100% agree with you that this is Virus Buster mode just flipped with the orientation top vs bottom.

The gratuitous RNG in this game is what really kills it for me. The assistants have awful RNG on their bonus skills and are generally deadweight because nothing ever procs. And to top it all off they had the slimy idea of making it so that an assistant won't be removed from the gacha pool until it's level 3...

But wait, then that means you only need to roll 1 assistant 3 times then, right? Wrong. Every level has its own leveling tier, which adds up incrementally: 1 time for level 2, 2 times for level 3, 3 times for level 4... Wait, what? Yes that's right. I was lying. And so was Line and NHN; level 5 is the actual maximum cap. I have no fucking clue why they say it's 3 when it's actually 5. The game is generally obtuse in what it conveys regarding stats and percentages.

And so, if you do the math... You actually need to roll a whopping 10 times to actually be rid of the assistant or doctor from the pool. And you know what that means. Only whales who are delirious enough to invest in this game are ever going to get anywhere. Stage Mode is mostly fine, if a bit bullshit at times, but you can brute force it with smart play. Versus Mode? Forget about it. The aforementioned whales make it an absolute shitshow. Considering the level increases actually do raise the RNG percentage by a bit on an assistant, their stuff is more potent and more likely to proc.

There are things I do like about this game, as scummy as it is. I like that it has substantial single player content and scoring with goals to achieve, and a slew of amusing characters in doctor form with unique stats and abilities. And yes, it is indeed reminiscent of Virus Buster from Dr. Mario Online Rx but in reverse, but I find it to be a fresh take on the formula and not as bad as it sounds (Although nothing beats standard classic Dr. Mario gameplay with pills falling from above instead). There are moments where it feels great to conquer a level and its ridiculous new gimmicks through ingenuity or cheese. I hope an actual new Dr. Mario game takes cues from those particular things, but as for the rest of it? Complete bunk. Like how everyone else is saying here, this a complete disgrace to the IP and the gacha + RNG greed shows Nintendo is starting to get enticed by the dark side of mobile gaming. I'd like to think it's mostly Line and NHN's fault, but it's hard to tell at this point.

Regardless, the sheer amount of gacha rolling and RNG uselessness has me forever turned off. I don't even feel compelled to continue playing even with the new updates that add characters and worlds, because the expanding pool is only increasing the odds when rolling now. No amount of freebie staffing tickets over maintenance hiccups is enough to sway me back. Oh yeah, and one last thing: Hearts are useless currency. You can only use a maximum of 10 per day from friends who sent you hearts, so all those hearts Nintendo and the others give you are just sitting there rotting away until they expire. Doesn't matter how many friends you add, because it is a futile endeavor in the end.

It's almost as if Nintendo handled the creative gameplay and new content and feature additions, and Line and NHN handled all the scummy mobile business strategies, loopholes and limitations, surely inspired by other Japanese mobile games that engage in that kind of drivel. But the fact that Nintendo actually allowed such things in the first place is what's making me doubt them to begin with... Just plain sad.

It's a fun free game that I enjoy in bursts. Gets pretty challenging to get three stars around level 26

Are mobile games supposed to be good and fun or just revenue generators?

Not aiming that at Nintendo or Dr Mario but in general. Seems the business model is to create something that will generate revenue first and forget about gameplay rather than the traditional console model of creating a good game first (which in turn generates revenue)

I downloaded it. Played for about 15 minutes, and was done. It's like a basic puzzle game, doesn't really feel like Dr. Mario. Not shocked it's not doing great.

The game is fun to me. I haven't spent any money on it and I'm on level 217. I have my complaints about the game, but it's still enjoyable.