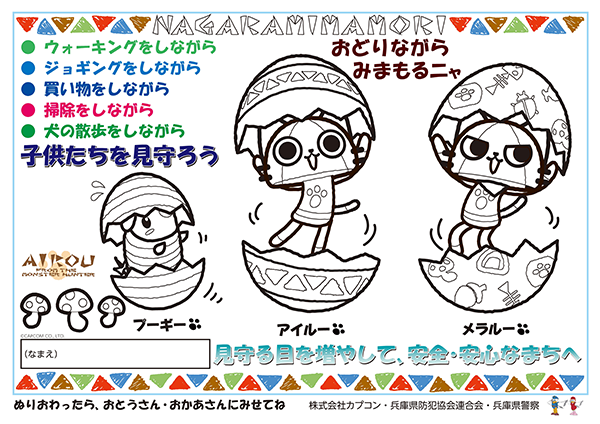 Capcom today announced that its popular Monster Hunter series will be utilized for the first time in the Hyogo Prefectural Police’s Local Safety Program, scheduled to be held from October.

Capcom supports regional revitalization efforts throughout Japan by leveraging the power of its brands to engage people in four areas: Economic Development, Cultural Awareness, Prevention Education and Election Participation. The company has carried out various activities since 2009, such as concluding the first comprehensive agreement between a video game company and a local government body, collaborating with police in a number of prefectures on prevention activities, and working to raise awareness of gubernatorial elections.

Capcom received a request from the Hyogo Prefectural Police to utilize the Monster Hunter series in the Hyogo Prefecture’s local safety efforts accompanying the larger national safety campaign that will be held starting in October in order to promote more widespread awareness of community crime prevention among residents. At an event scheduled to be held on October 8 at Marine Pia Kobe, original crime prevention coloring sheets, reflective keyholders, and towels all featuring Felyne characters will be distributed. Further, Capcom will support local safety efforts throughout Hyogo with the production of security goods to broadly raise awareness of automobile-related crime prevention, which has been on the rise in Hyogo.

Driven by its philosophy of being a Creator of Entertainment Culture that Stimulates Your Senses, Capcom will work to address climate change and other issues facing society while aiming for sustainable growth through establishing a relationship of trust with its stakeholders and harmony with the environment.