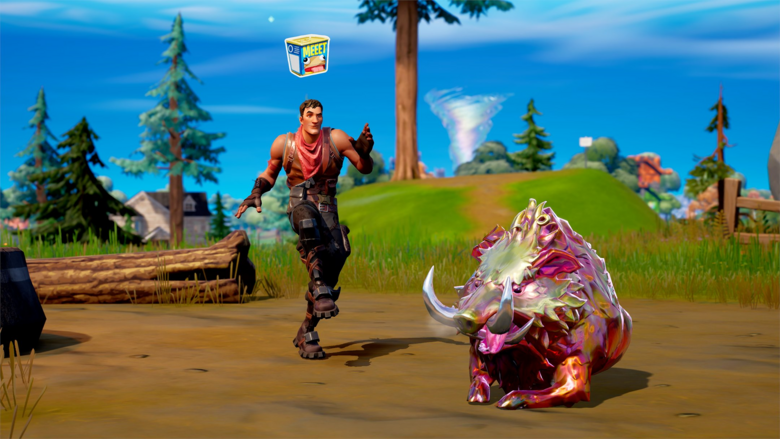 Fortnite has been updated to Version 22.10 following some downtime last night. The full notes for this update have been released, which you can read in full below.

SCOPE OUT PREY WITH THE COBRA DMR

It’s not easy to flee the long range of a Cobra DMR. With its fast fire rate, opponents can be swiftly defeated if you have a steady hand. Find Cobra DMRs from the ground, Chests, Supply Drops, fishing, Loot Sharks, and Reality Sapling Fruit!

(With the arrival of the Cobra DMR, the normal DMR has been vaulted.)

So far in Chapter 3 Season 4, you’ve been using Keys to open Low-Security Vaults and High-Security Vaults. Now, Holo-Chests join the receptacle selection! Use one Key to open a Holo-Chest holding an item you desire: Holo-Chests display a holographic preview of what’s inside so you’ll know whether it has what you need before opening it.

GRAPPLING WITH THE PAST - THE GRAPPLE GLOVE RETURNS!

To begin swinging, shoot its grappling hook at a hard surface like a cliff, prop, or building. Each successive swing gets faster until the third swing and beyond, when you’ll be at max speed.

If you miss a shot and land on the ground, you’ll have a brief window of time to shoot the grappling hook and come back swinging. You’ll have an even longer window if you slide out of a swing, so don’t be afraid to combo some slides into your swinging action!

Unlike in Chapter 3 Season 3, Grapple Gloves aren’t stored in Grapple Glove Toolboxes. This time, they can be found from the ground, Chests, Supply Drops, and Legendary and Mythic Reality Sapling Fruit. Grapple Gloves will be available until the v22.20 update.

Bytes’ The Nothing’s Gift Pickaxe is on Page 2 of the Chapter 3 Season 4 Battle Pass. Starting in v22.10, everyone who’s unlocked this Pickaxe (or will unlock this Pickaxe) will receive Bytes Quests! Equip Bytes and complete these Quests to unlock up to seven alt Styles for The Nothing’s Gift, including The Dread Claw, Sharpened Sunburst, Razer Thorn, and more. What can’t Chrome be molded into?

Become chromatic. In the Bonus Rewards section of the Battle Pass tab, bonus Styles for this Season’s Battle Pass Outfits have been available for players who progress past Level 100. Starting October 6 at 9 AM ET, this Season’s Super Level Styles will become available!

What are the Super Level Styles this Season? Progress past Level 140 in Chapter 3 Season 4 and start unlocking the Celestial, Spectral, and Aurelian Styles for Bytes, Lennox Rose, Paradigm (Reality-659), Meow Skulls, and Spider-Gwen.

An enemy was here! Look, loot over there! Starting with v22.00, you may have noticed a more robust Squad Comms Wheel. Hold your Ping button to pull up the Squad Comms Wheel and place pings with more detail for your squad — or send orders to your hired Characters.

While your squadmates may ignore the added details to “Watch this spot” or “Defend here” when they’re halfway across the map, Characters you’ve hired on the Island will follow your every command. Place markers for them to move up to a point, follow you, or even go revive a downed teammate!

Boogie Bombs have been vaulted in both non-competitive and competitive playlists.

Most one-handed Pickaxes, such as the Gum Brawler and Tribute’s Flail, would previously equip by flying into the player’s hand. We’ve adjusted this to be a new equip animation in v22.10.

In case you missed it, we recently released a balance hotfix affecting EvoChrome Shotguns and EvoChrome Burst Rifles:

Uncommon, Rare, Epic, and Legendary versions can now be found in Chrome and regular Chests.

The damage needed to upgrade an EvoChrome weapon at each rarity tier is now greatly reduced.

Players on controller are now able to consistently navigate the inventory with the left thumbstick.

Fixed an issue that caused the map to default to the Map tab even when previously closed on the Quests tab.

Lennox Rose’s hair no longer obstructs the reticle while crouching.

Players should no longer get stuck when phasing through Chrome-ified structures at Herald’s Sanctum.

Chrome-ified building pieces now lose their “on fire” visual effects when the fire has ended.

Fixed an issue that caused visual/screen effects from a Chrome Vortex to persist in specific circumstances.

Blackheart’s Character indicator is again appearing on the minimap.

The Storm notification no longer appears towards the middle of the screen.