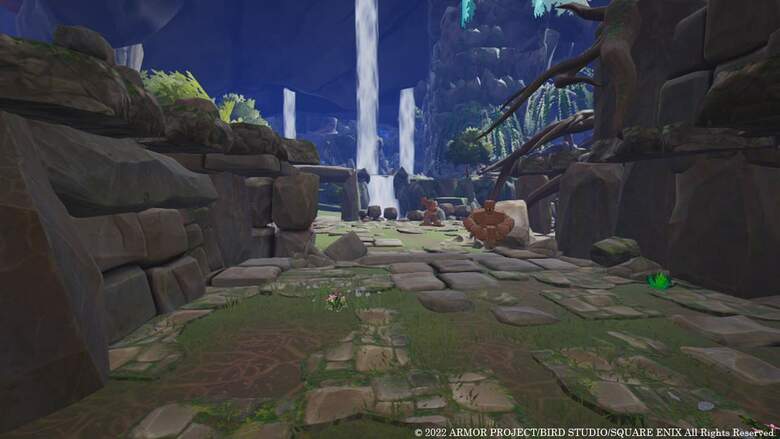 Square Enix has been releasing a series of blog posts to detail what Dragon Quest Treasures has to offer, and the latest installment in that series has been published today.

In the most recent blog post, we receive a closer look at Draconia, including a breakdown of the five major floating islands and an introduction to Bejeweled Monsters. You can see that blog post in full below, along with a collection of new screens.

DRAGON QUEST TREASURES takes place in Draconia, but it may surprise you to learn that its islands once formed the bodies of two enormous Golden Dragons. Over the eons, their rocky remains have eroded away to leave six floating islands.

Excluding the central hub island, Erik and Mia can scour five very different biomes in their hunt for treasure, from volcanic mountains and bone-dry deserts to frozen wastelands. Each one is inhabited by a bevy of weird and wonderful monsters.

Let’s visit each one.

This is the island where Erik and Mia start their Draconian adventure. The upper level features plains and a dilapidated factory, while the lower level is home to forests and caves. A cable car makes it easy to travel between the two areas.

The Sylphanians have set up camp on the upper level, just around the corner from the stunning Teardrop Falls.

There are ancient buildings all over the island, but few have dared explore the monster-infested lower ruins.

Raging sandstorms wear away at the rocky outcrops of the Maneland, where massive skeletons protrude from the dust. In this land of blustery dunes and sand rivers, the Glide Forte is sure to be a lifesaver.

This entire island is covered in sand and rock, and only the hardiest monsters are able to survive here.

Sticky, oily puddles and fast-flowing rivers of sand are known to hinder even experienced adventurers.

Located in western Draconia, Cinderback Ridge is a volcanic island where rivers of molten rock and sheer cliffs abound. Some of Draconia’s strongest monsters inhabit the island’s central region, where the floor is flooded with lava.

Colossal red cacti grow in the Lumbar Lavalands at the centre of the island.

Jump over the lava with the Launch Forte, or float to safety with Glide.

In the northern part of the island, jutting out from the sprawling plains, is the lofty Mount Greywing. Elsewhere, monsters lurk in sodden marshes and poisonous swamps.

The Sprint Forte will make light work of the open plains and provide a refreshing breeze to counter the muggy marshes.

Mount Greywing, with its cooling mists, sits in stark contrast to the heat and humidity of the plains.

Many monsters, such as Glacial Golems, relish the sub-zero temperatures and stomp about in sheer defiance.

Surprises await on every island

Erik and Mia are sure to find useful items in chests and pots, but there are plenty of other surprises waiting for them in Draconia. Some secret areas are a tight squeeze to reach, and others will need a keen eye to spot, but any treasure hunter worth their salt is willing to overcome such challenges for the chance to find legendary loot!

Each island is served by several train stations. Once you repair them, you can visit each one directly from the station at your base.

Some islands have shops that are conveniently stocked with useful items, valuable recipes and local crafting materials.

You’ll need to crouch down to enter caves like this, but your efforts may well be rewarded with a hidden treasure chest!

Metallic monsters are a rare sight but defeating them will earn you a bucketload of experience points. You may even be lucky enough to recruit one!

During your adventures, you may come across special monsters made entirely of precious gems. These are exceedingly rare “bejewelled monsters”, and they carry exquisite treasure. But be warned - they’re fast on their feet (if they have them), so you’ll have to be lightning quick!

If you’re lucky enough to encounter one, they may want to join your gang - if you can defeat them, that is!

Strange balloons have appeared all across Draconia’s main islands. Shambles and Shady of the Thunderous Plunderers seem to be involved somehow and are even offering a reward to anyone who can burst them all.

Balloons will pop up in the most unusual places. Time to break out that trusty catapult and pop every one you can find!