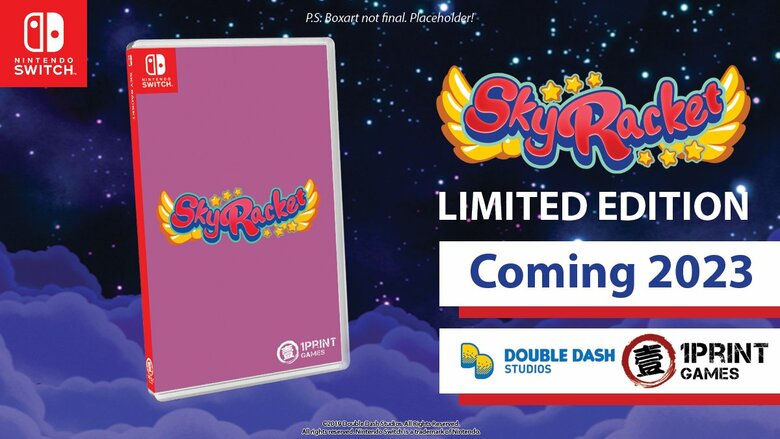 1Print Games have teamed up with developer Double Dash Studios to create a limited edition physical Nintendo Switch release for Sky Racket. More details will be shared in 2023, but judging by some of the past launches from the publisher, there will likely be 3000 physical copies up for grabs, each one priced at $34.99 USD.

As of right now, you can only pre-order the game via a bundle on the 1Print Games online store for $99.99. Alongside Sky Racket, the bundle also includes physical copies of In Other Waters and Slap City. Shipments of all three titles will be sent out in Q2 2023.

Sky Racket is the world’s first Shmup Breaker, mixing the classic genres of shoot ’em ups and block breakers! Blast bullets back at baddies while flying over whimsical worlds filled with vivid, kooky colors! Grab your laser tennis racket, a stylish scarf and your best buddies to battle a horde of fluffy enemies trying to blow you up back to the ground. Play as RacketBoy or RacketGirl, guardians chosen by the Capybara Goddess to save your galaxy from the paws of a destructive tyrant genius, Korrg! Unable to attack by yourself, you must strike enemies’ attacks back at them, turning the battlefield into an explosive space tennis battle. Rain tennis-devastation down on hordes of ducks, cat-sandwiches, fluffy bunnies, space-tennis-robots and actual BANANAS in this unique and totally realistic adventure to save the galaxy!