An English localization has not been announced.

Koei Tecmo has given us a complete info blowout on the upcoming Japanese strategy game Nobunaga’s Ambition: Rebirth.

It will be released for Nintendo Switch in Japan on July 21st, 2022 for ¥10,780, and pre-orders will start on March 31st. A Nobunaga’s Ambitio series 40th anniversary live-stream, linked above, has been recently broadcast, with tons of new gameplay footage for Nobunaga’s Ambition: Rebirth starting at 56:57.

A physical collector’s edition, known as the “Treasure Box”, has been announced, and will include a strategy guide/artbook, a daily pad calendar, and a 2-disc OST. It will be priced at ¥16,280. As per usual with this type of game, a deluxe digital edition will also be available, priced at ¥14,080 with digital versions of the same strategy guide/artbook and OST included within. In addition, a download code for the exclusive scenario “Tensho Sarushibai” will be offered.

A download code for the scenario “Battle of Nagashino-Shitaragahara” will be included with all pre-orders.

Thanks to Gematsu for the translation! 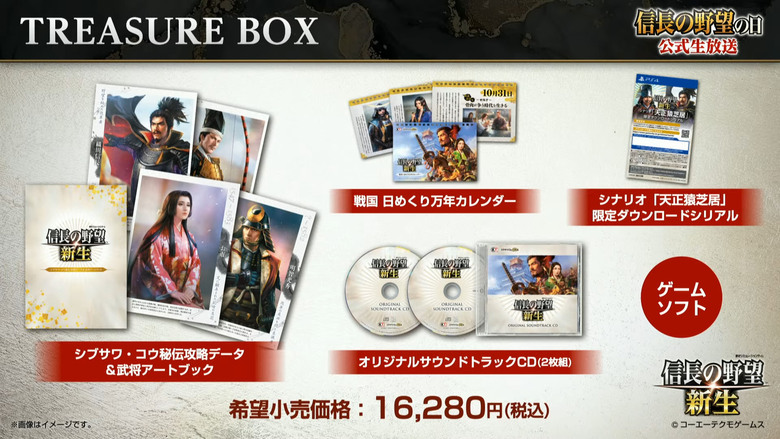