INTERVIEW: Talking to Dawn of the Monsters devs about kaiju, beat'em-ups, and more 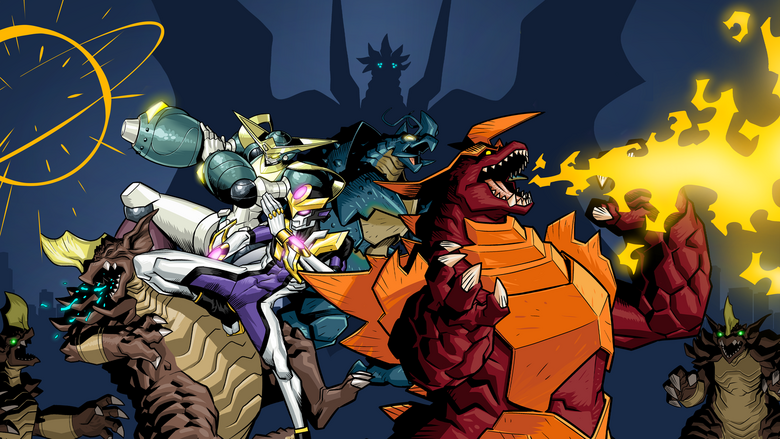 Dawn of the Monsters is manga-inspired, side-scrolling, kaiju beat’em-up heading to the Switch on March 15th, 2022. Developed by 13AM Games (Runbow, Double Cross) and published by WayForward (Shantae, ‘Mighty series), Dawn of the Monsters aims to pay homage to the beat’em-up genre while also expanding it with customizable monsters, fully-destructible environments, and more.

In order to learn more about the game, we had a virtual sit-down with Dawn of the Monsters creative director/13AM Games CEO (and self-professed looooongtime GoNintendo reader!), Alex Rushdy, along with WayForward director of bizdev and publishing, Adam Tierney. 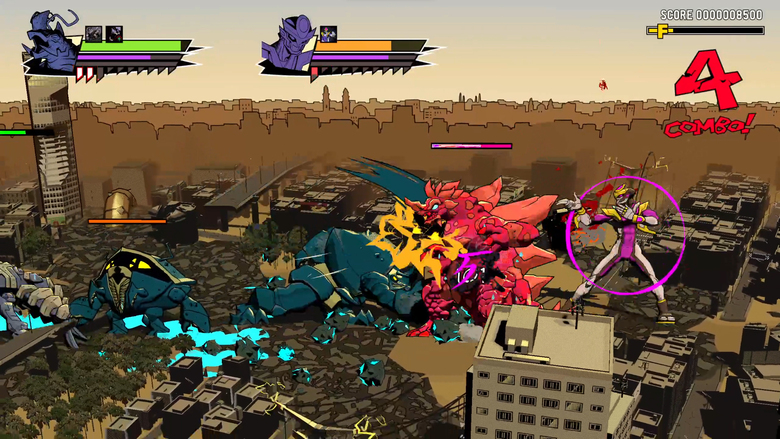 GoNintendo: Dawn of the Monsters is a 13AM Games title. What drew WayForward to pick up the title for publishing?

Adam Tierney: As WayForward has expanded from just development to publishing, we’ve begun looking for projects that could be developed mostly externally (outside our studio). Alex was pitching Dawn at just the right time, and luckily the stars aligned so that WayForward could publish this title for 13AM Games. We’re interested in any games with strong gameplay, a unique art style, and a compelling identity, just like the games we develop ourselves, and this one checked all the right boxes. We’re very proud of the end result, and hopefully it’s the first of many successful WayForward and 13AM collaborations.

GoNintendo: The game uses an absolutely gorgeous comic book/manga/cel-shaded art style. How did the team arrive at this approach?

Alex Rushdy: Well, we wanted to offer something unique from existing/previous giant-monster games, knowing that we weren’t interested in the hyper-realistic approach. We started by looking at giant-monster movie posters and the rich imagery they are painted with. We decided then and there that we wanted to capture the feeling of those amazing movie posters (painted by famous artists like Noriyoshi Ohrai and Yuji Kaida).

From there we knew we had to make something more simplified and stylish to fit the genre and our studio’s sensibilities, so we looked at manga and comic books, specifically the work of Mike Mignola, as a way to translate this into an achievable art style for the game. Then we built some pretty fancy tech to tie it all together! It allows us to dynamically light 2D and 3D objects in the same scene in a pretty unique way. :)

GoNintendo: How hard is it to come up with new monsters for this particular genre?

Alex Rushdy: Well, I personally love designing monsters, but I find it pretty challenging to make something new. Our art director, Takashi, came up with some incredible stuff but it took a lot of work. So we were worried about the time it would take to make all the creatures. But we really have to hand it to our incredibly talented artist/animator Mike Lambert. He designed, no joke, over a hundred creatures so quickly that the real challenge became picking the ones we liked best!

So, thanks to a talented team, we had no shortage of fantastic monster ideas, and once we had some rules set up (they have to work like a traditional man in a suit, they have to take inspiration from nature and ancient statues, etc) we completed them pretty quickly. 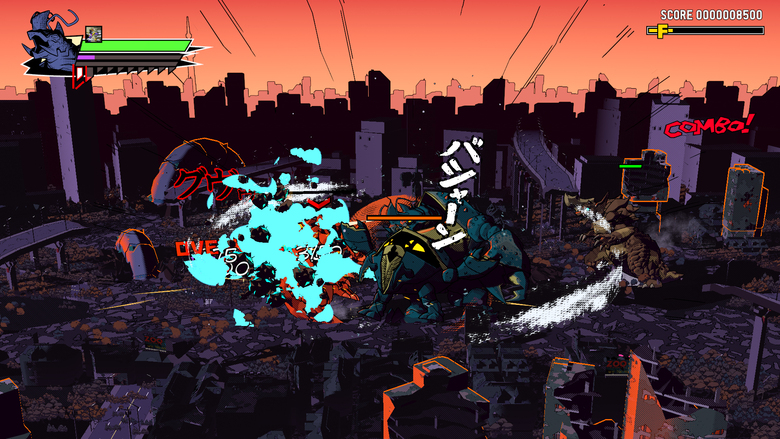 Rumble in the rubble

GoNintendo: What monster design went through the most iterations before getting a final look locked in?

Alex Rushdy: That’d have to be Megadon! Arguably the flagship monster of the game and inarguably the most popular, Megadon went through lots of iteration over the years. In fact, eagle-eyed Double Cross fans may notice a cameo of an old version of Megadon on Skip’s desk at RIFT HQ.

We wanted to make sure Megadon was evocative of classic dinosaur kaiju (Godzilla, Gomora, Gamera, etc.) while also offering something new and that would work well in a game focused on combat. I think the team did a fantastic job, but as you’ll see in the game’s gallery, he changed a lot in ways both big and small, thanks to feedback from people all over the world (including Nintendo themselves at one point!).

GoNintendo: How deep down the rabbit hole did the team go when studying the kaiju genre?

Alex Rushdy: Well, for me, I live in that rabbit hole, so I did my best to guide the uninitiated! We had weekly movie nights throughout pre-production and each movie was followed by a discussion. We made sure to dive into the themes and history of the genre and how it touches on nuclear war, environmentalism, and geopolitics.

We also attended G-Fest 2019, the biggest kaiju fan convention in the world, and had an absolute blast. We got to talk to fans, hold a panel discussion, and even share a survey to see what fans do and don’t like! We debuted the first-ever trailer at that event and had a massive audience of over a thousand cheering kaiju fans!

GoNintendo: Are there any kaiju films in particular that were a major source of inspiration?

Alex Rushdy: We were inspired by a lot, but the biggest inspirations for us were Pacific Rim, Patlabor, Godzilla: Final Wars, and the ’90s Gamera trilogy. Also took huge inspiration from Ultraman Gaia (the TV series). 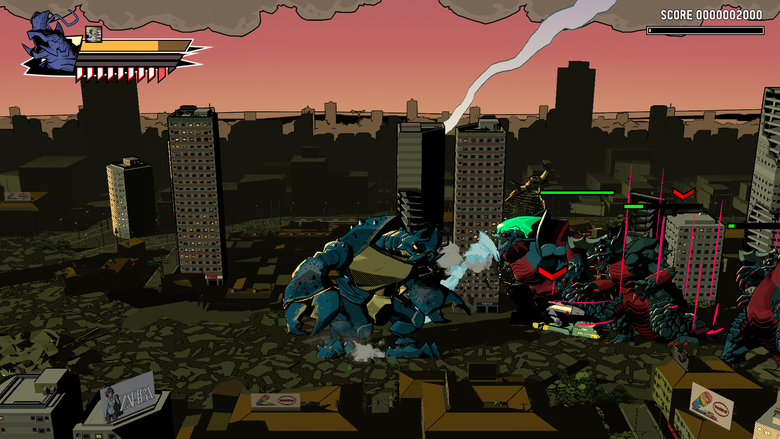 GoNintendo: What do you consider the key elements in making giant monster battles feel good?

Alex Rushdy: I think the most important thing is to balance weightiness with responsiveness. The truth is, kaiju move really, really slow in movies and that isn’t really all that fun to control. So the key to the best kaiju games is to make the movements feel weighty and impactful while controlling responsively. If a game feels sluggish and slow, it might get frustrating for the player. Fun first!

GoNintendo: Just how deep can you go with the DNA augments when customizing your kaiju?

Alex Rushdy: Pretty deep! There are over 45 Augments in the game and you can equip up to three on each of the four playable titans. They allow you to express your playstyle in a way beyond character choice and can be used to make the game a little easier for you, or to increase the challenge significantly but also increase score potential. It becomes a bit of a game in and of itself to find cool combos and experiment with different perks. Add on top that you can re-roll any Augment to get the ideal stats you want, and you can spend a lot of time making the perfect build for every character!

GoNintendo: What kind of mayhem can players get up to if they play in co-op mode?

Alex Rushdy: The combo potential in single player is pretty high, but in co-op you can do some REAL damage to the monsters. It can honestly get pretty nuts! I definitely recommend playing with a friend if you can, as making complimentary builds and scrambling to revive one another when you die can be a lot of fun. Like most beat-’em-ups, the game is more fun with a friend by your side! 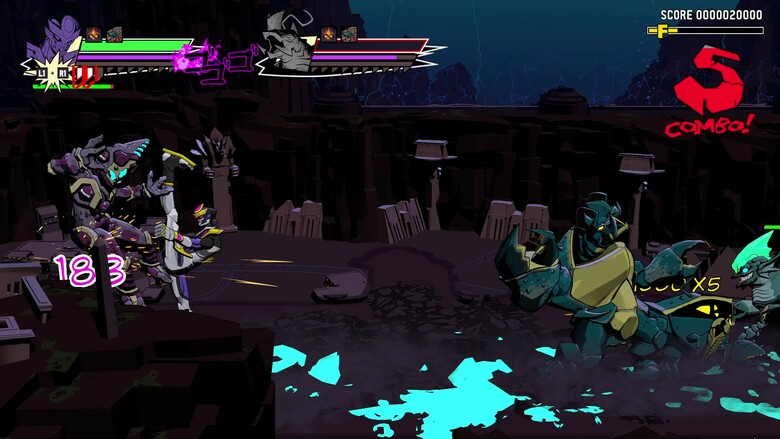 GoNintendo: With over 35 missions, it seems like there’s plenty to do and see here. Is there a particular mission the team is most proud of?

Alex Rushdy: If I spilled that I might get yelled at for spoiling a few surprises, but let’s just say that we worked hard to make sure each world and each mission offered something fresh and new. You don’t just walk through city after city — you get to visit deserts, tropical forests, rivers, and more! I’m particularly proud of the variety of enemies we made for the game. I hope people will share their favourite moments in the game with us!

A huge thanks to both 13AM Games and the WayForward team for making some time to chat with us.

Dawn of the Monsters comes to Switch on March 15th, 2022, and is priced at $30. For even more details, you can check out the game’s official hub page here.