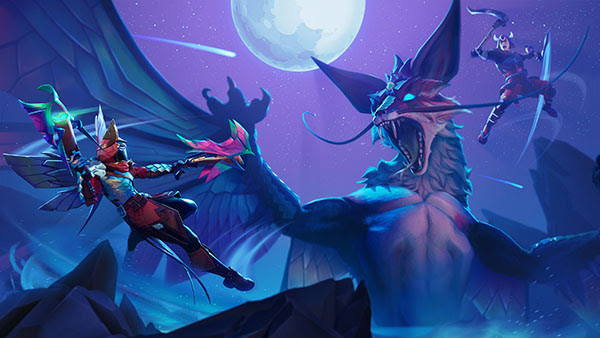 Dauntless has been updated to Version 1.10.4, and this update brings as slew of changes, tweaks, and more. You can see the complete patch notes for this update below.

We’ve heard the feedback on Escalation variance and we know that powerful amps can turn a regular run into an exciting or surprising adventure. In Radiant Escalation, we’ve added Legendary Lantern Amps that are only available with a particular lantern equipped. While rare, these amps are extremely powerful and mix up Escalation runs in truly legendary ways. Shrike’s Zeal and Broadsides Lantern are the first lanterns with Legendary Lantern Amps.

The Broadside Barrage legendary amp is only available to Slayers with the Broadside Lantern equipped. When activating your lantern, drop a long line of bombs that each deal 2750 damage and interrupt Behemoths.

Completing the quest Meltdown now rewards 20 Combat merits instead of 10.

The quest Scrutiny on the Bounty now unlocks only after unlocking Milestone IV: Forge and Formula in the Slayer’s Path.

Added speed wisps to the island.

Changed the player animation portion of the Chronovore’s sync attack to have more weight and feel more natural. You still don’t want to get eaten by the Chronovore.

This update also includes a laundry list of bug fixes. Since that list is quite long, we’ll link you to it instead of filling up the page here. You can see the complete breakdown of bug fixes here.