REVIEW: TMNT: Shredder's Revenge is a shell of a good time 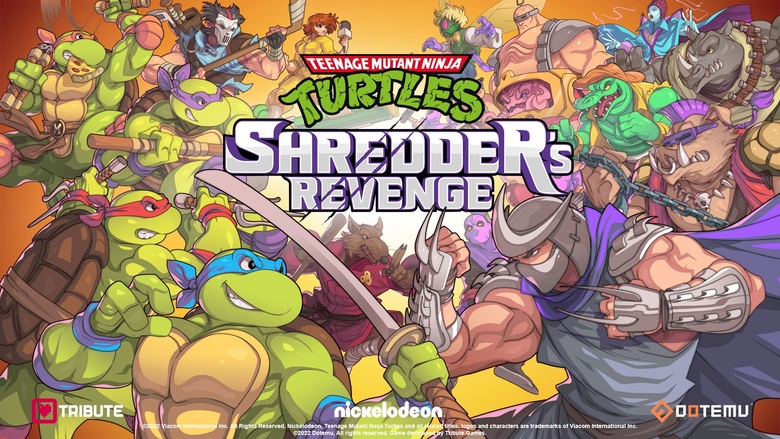 The Teenage Mutant Ninja Turtles were a formative part of my childhood experience. I was 6-years-old when the original TMNT cartoon hit the airwaves, and you can bet I was there every Saturday morning to watch. From there, I, like many other kids, was swept up in Turtlemania. That infatuation involved contact points with the toys, movies, books, and of course, video games. I consumed every bit of Turtles media I could get my hands on, and to tell the truth, very little has changed since.

The TMNT games certainly hold an extra-special place in my heart, as so many great memories are tied to them. I suffered the agonizing difficulty of the original TMNT NES game and loved every bit of it. I stood in line for a half-hour to play the TMNT arcade game when it launched, and the wait was worth every second. I enjoyed games like TMNT II: The Arcade Game and TMNT: Turtles in Time side-by-side with friends in co-op. For a decent number of years, you could depend on TMNT games to be some of the finest adventures out there.

Konami’s TMNT beat’em-ups remain some of company’s finest work to this day. Those games are shining examples of just how much fun a beat’em-up can be, and they’ve certainly stood the test of time. A handful of companies have tried to replicate that success through subsequent TMNT beat’em-ups, and while a few were decent-to-good, none of them ever came close to what Konami pulled off. That’s where Dotemu (Streets of Rage 4) and Tribute Games (part of the studio used to work on Scott Pilgrim vs. The World: The Game and TMNT Game Boy Advance) come in.

When TMNT: Shredder’s Revenge was announced, it certainly looked and sounded the part. Once fans found out that both Dotemu and Tribute Games were involved, the excitement grew exponentially. Not only did this look like it would replicate the classic TMNT experience, it had proven teams tied to it. Dotemu had worked wonders with Streets of Rage 4 and Tribute Games had a string of pixel art hits in their lineup, making the two seem like a perfect pairing.

Having played TMNT: Shredder’s Revenge start to finish, I can honestly say that these two teams managed to surpass my expectations, and at the very least, have created a TMNT beat’em-up that easily stands toe-to-toe with the classics. 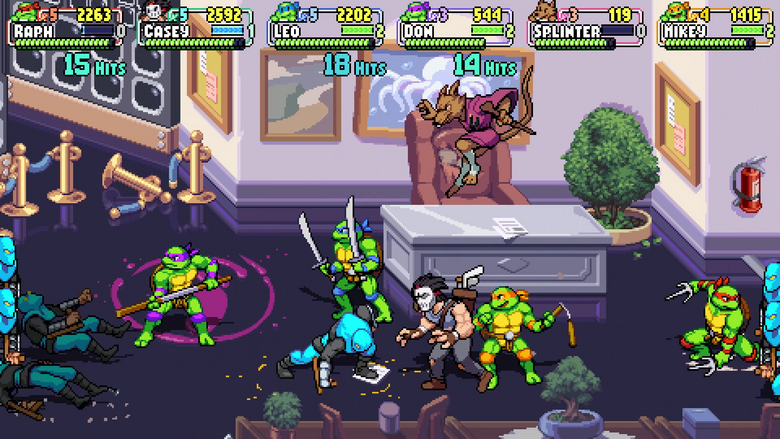 Not your typical office meeting

There are plenty of games nowadays that aim to revive classic franchises and experiences, but many feel like they’re missing something. They look the part, but don’t feel right. They sound the part, but don’t play well. All the pieces and parts are there, but they just don’t mesh together well. TMNT: Shredder’s Revenge does not suffer from any of those issues. It’s extremely clear from the first minutes of the game that the devs involved have a crystal-clear understanding of what made classic TMNT beat’em-ups work, and they made sure to nail those aspects. This isn’t a facsimile or knock-off; this very much comes across as the real mccoy.

Every element of a great beat’em-up are on full display in TMNT: Shredder’s Revenge. Each punch and kick really connects, thanks to pixel-perfect placement and impactful sound effects. Level designs have a great flow to them, and are both fun and interesting from start to finish. Boss battles take fighting beyond the usual enemy skirmishes to include unique setups and challenges. The soundtrack backs the action and keeps your toes tapping. You can’t have a truly great beat’em-up without these elements, and TMNT: Shredder’s Revenge comes off pitch-perfect across the board.

Truth be told, TMNT: Shredder’s Revenge ends up impressing on a level that even the best beat’em-ups don’t. This game offers a considerable amount in the way of attacks, providing more variety than you usually get from the genre. The multitude of ways to pummel your adversaries keeps things quite fresh from beginning to end, and I constantly found myself mixing it up as I went along. There are moves that work best in tandem with others, as well as against specific enemies. There aren’t any attacks that feel like throwaways, which creates open-ended combat scenarios only limited by your ability to think on the fly. 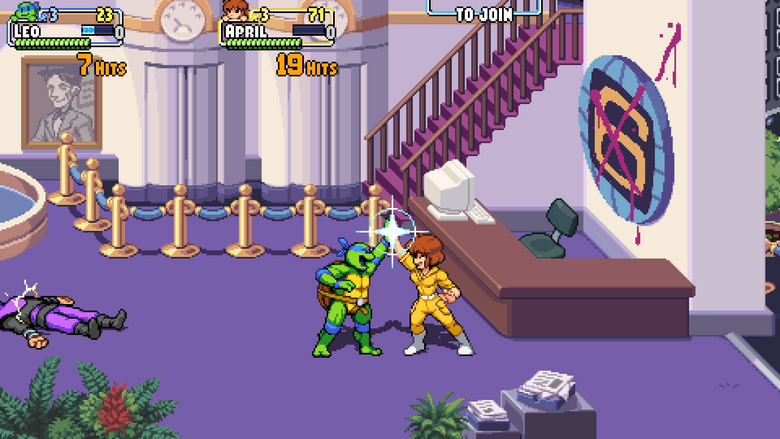 Two aspects of fighting that particularly impressed me were the dodge and charge-up options. Again, these are elements that you don’t usually see in a standard beat’em-up. Being able to dodge out of harm’s way at any moment made combat feel so satisfying, and did a lot to build up the notion of the Turtles being absolute badasses. The same goes for the charge-up move, which lets you hold back on your main attack to really pack a wallop. Using this on any old enemy is fantastic, but certain members of the Foot Clan are best handled through this option. Winding up and cracking skulls with these huge bashes never, ever got tiresome.

That’s another element of TMNT: Shredder’s Revenge that seriously impressed me; the lack of repetition. Even the best beat’em-ups can suffer from repetition the longer you play, but I never had that wash over me with TMNT: Shredder’s Revenge. That variety of moves and nimbleness of the Turtles seemed to be the key in staving off the monotony you get from the genre. Even my favorite beat’em-up, Streets of Rage 2, can start to wear a little thin towards its final moments. Somehow, some way, TMNT: Shredder’s Revenge manages to escape that. It’s a true testament to the expertise of the devs on board and their careful planning.

Perhaps some of TMNT: Shredder’s Revenge’s freshness also comes from the level designs, as there are a ton of wonderful stages. It’s not like they’re filled with crazy environmental hazards or anything like that, either. They just feel fun to wander through, as you’re always wondering what you’ll see next. The bombastic colors and cartoonish style certainly help to keep things lively, but I think it might be the game’s approach to humor that takes TMNT: Shredder’s Revenge’s engagement to the next level. 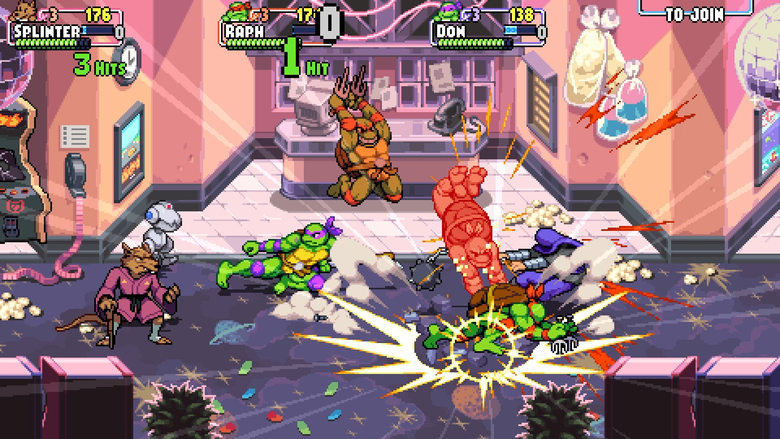 Master Splinter must be proud

While later TMNT cartoons and movies would tone down the humor in a big way, the original cartoon series was big on the silliness. Yes, the Turtles still fought all the time, but they made wisecracks, had pizza parties, and goofed off a ton. TMNT: Shredder’s Revenge captures that spirit through its level design and environmental storytelling. You’ll come across Foot Clan wearing chef hats as they hide in a kitchen, or chomping on ice pops during a hot Summer day at the zoo. These little touches are all throughout TMNT: Shredder’s Revenge, and they go a long way in making the stages entertaining, memorable, and endearing.

Of course, you can’t break down TMNT: Shredder’s Revenge without discussing the music. In my personal opinion, any game is made better by fantastic music, but it’s an absolute must for beat’em-ups. There’s something about a pumping soundtrack that makes a beat’em-up that much better, and if those tunes aren’t there, you’re missing a big chunk of the experience. Composing duties on TMNT: Shredder’s Revenge went to Tee Lopes, who worked on Sonic Mania and Streets of Rage 4, so that right there should tell you all you need to know!

While Lopes’ music on the above-mentioned titles is stellar, I think he’s truly outdone himself with TMNT: Shredder’s Revenge. Not surprisingly, it seems Lopes put a lot of time into studying the sound of classic Konami TMNT games, and then took that knowledge and crafted a soundtrack that hearkens back to those classics while offering something wholly original. I can’t say it any more simply than this. Tee Lopes has come up with an absolutely perfect soundtrack for TMNT: Shredder’s Revenge. It elevates the game in every way possible. 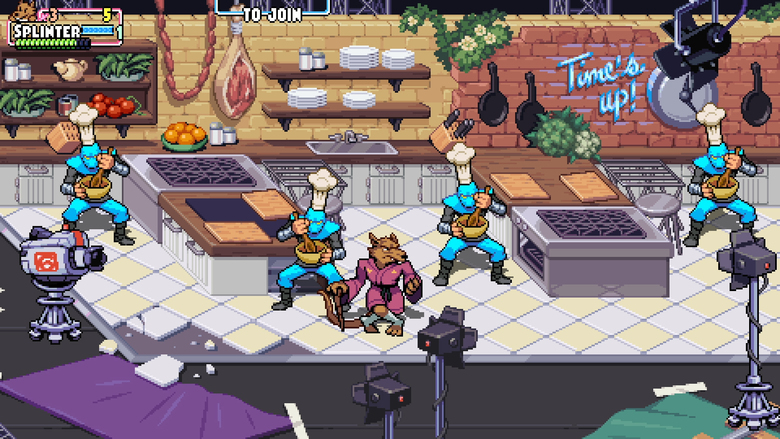 Tonight we dine on turtle soup!

There’s not a bad tune in this game’s soundtrack, and there are plenty of songs that go above and beyond what I expected. I didn’t think TMNT: Shredder’s Revenge was going to include songs with lyrics in them, but there’s a handful of voiced tracks in this game, and as the kids say, they’re absolute bangers. If someone told me beforehand that this game would have singers/rappers for some of its songs, I would be pretty worried. I have no problem admitting when I’m wrong, though! The songs in TMNT: Shredder’s Revenge that are backed with vocals might actually be my favorite in the entire game!

Praise has been the sole focus of my TMNT: Shredder’s Revenge review, and that’s because I have nothing else to offer. I honestly can’t think of a single bad thing to say about this game. Instead of doing everything it needed to, TMNT: Shredder’s Revenge goes beyond what was required, and sometimes far beyond in the best way possible. The visuals are top-notch, the gameplay is spot-on, the music is perfect…what else is there?! I don’t think I could have expected, or even hoped for anything better.

To be 100% clear, this is not a case of rose-tinted glasses. I am not blinded by nostalgia, nor do I swear unwavering allegiance to the Turtles. I have played many a bad TMNT game in my day, and the same goes for lackluster beat’em-ups. This genre happens to be one of my favorites, so I’d say I’m actually hyper-critical of what developers do with games like this. Even with that heightened state of understanding and sensitivity to beat’em-ups, TMNT: Shredder’s Revenge kills it. 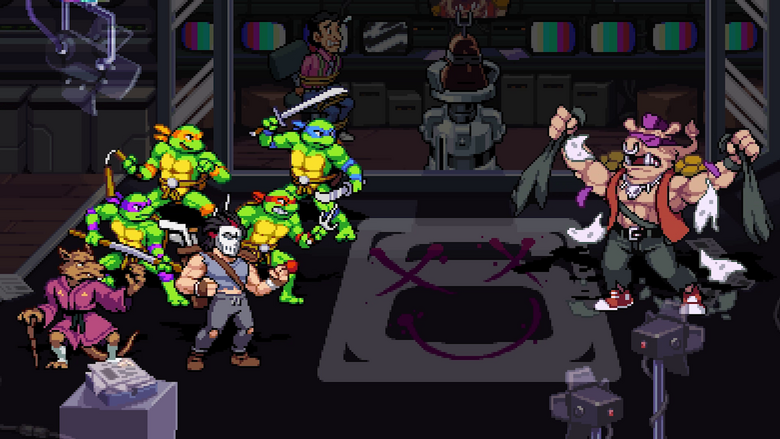 If you had any hesitation about this game, I hope I’ve pushed those feelings completely out of your head, or as far into the back of your mind as possible. TMNT: Shredder’s Revenge is the genuine article, and once again proves how Dotemu has an incredible respect for/understanding of classic beat’em-ups. Now we know that Tribute Games is capable of just the same, and these two teaming up has resulted in not just one of the best TMNT games ever, but one of the best beat’em-ups in years.

Editor’s Note: I was unable to test online play for this review, but I will be updating this piece with a few paragraphs on that element once I’ve tried it out. I did get to experience local multiplayer for a short amount of time, but I couldn’t get a full 6-person session together. In my short experience with local multiplayer, the game performed flawlessly, but again, I need much more time with this component before I can deliver a final word. 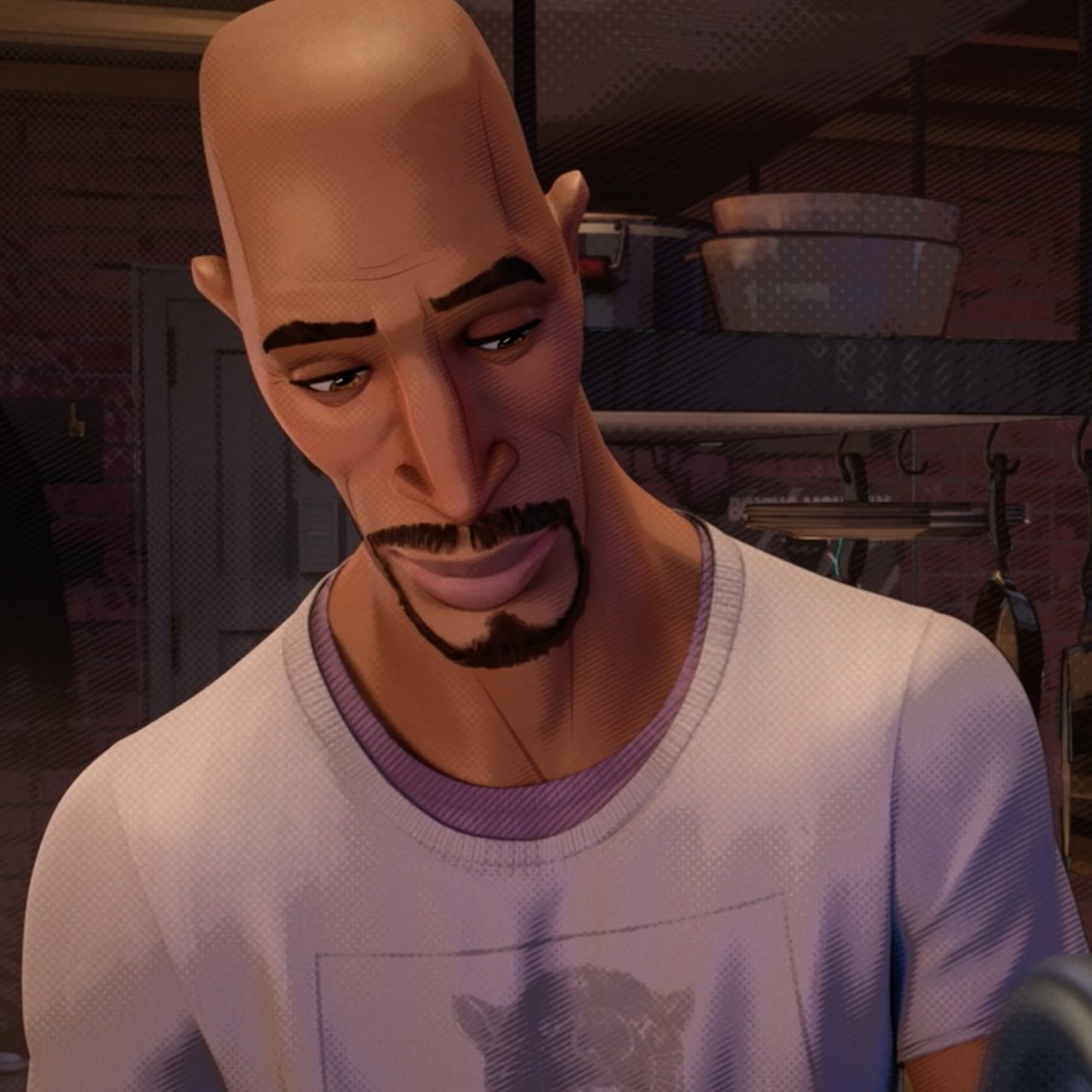