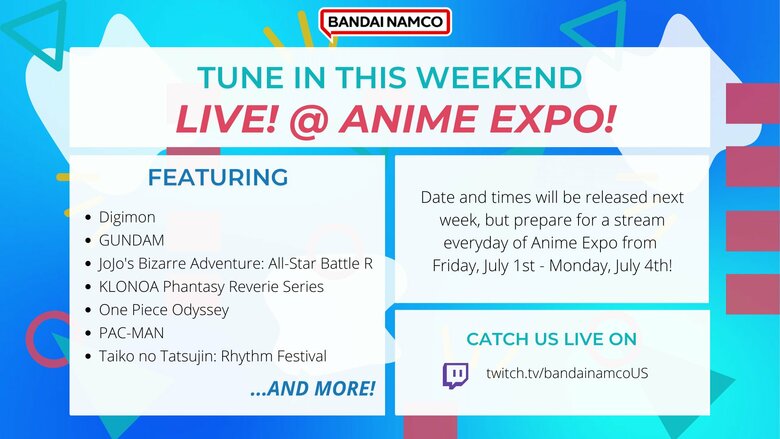 Bandai Namco has released a few tidbits about their Anime Expo 2022 plans so far, but today they’ve shared the full rundown of what they’ll be doing at the big show. Not surprisingly, the company has a lot planned for fans of anime games around the world.

First up, you can head to Bandai Namco’s booth to enjoy some demos for upcoming Switch games. You’ll be able to go hands-on with Jojo’s Bizarre Adventure: All-Star Battle R and Digimon Survive demos, and doing so will net you some free swag! For Jojo fans, you can snag yourself a free temporary tattoo, and Digimon faithful can get signed autographs, various prizes, and take photos of the special displays. There’s even a Digimon store to snatch up some goodies at! Just remember, free swag is in limited supply, so make sure to drop by Bandai Namco’s booth early!

In particular, Bandai Namco’s Habu Kazumasa, producer on Digimon Survive, will be signing autographs and chatting with Digimon fans at the Bandai Namco booth on July 1st and 2nd from 3:30PM – 4:30PM PT.

Bandai Namco will also put on a Summer Showcase panel (Friday, July 1, 8:30 p.m. PT in Petree Hall) that will include exciting reveals and news for the newest titles. The game developers themselves will also be joining to share exclusive info!