The perfect time to pick this one up! 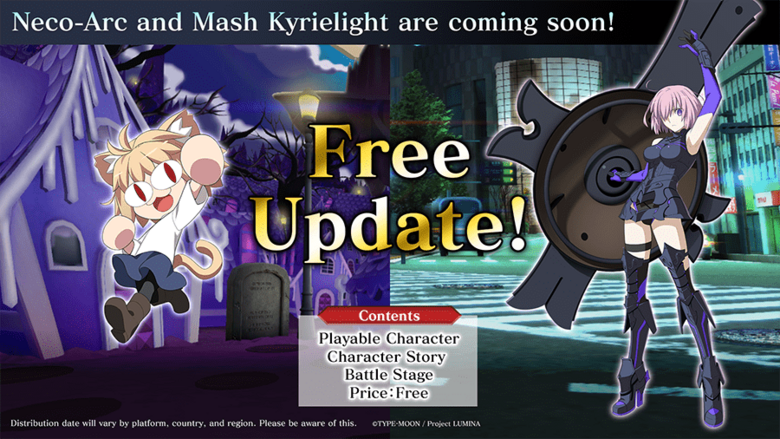 Along with that news, Project Lumina also revealed that a special sale is underway for Melty Blood: Type Lumina, making it the perfect time to pick up this game. You can check out the official announcement for the DLC characters and the limited-time sale below.

The release date and other details will be announced at a later date.

A familiar face from previous Melty Blood titles, Neco-Arc returns with next-generation animation! Keep an eye out for further updates to find out their battle styles and roles in the story!

Lumi-Arc, a cat awakened to the new power of “Re:make” descends on Souya!

A comical trickster that disrupts the battlefield with luck-dependent moves.

Neco-Arc is a unique character that disrupts the battlefield with highly-random moves, using a wide variety of tricky moves in battles. Luck is key to victories for her, and she can use powerful moves or summon helpers when it’s on her side! Both her player and opponent will have to adapt to suddenly-shifting circumstances. She has limited reach, so it takes some ingenuity to land attacks on opponents. Battles will come down to playing the field as it becomes more lively with hordes of cats or attacks by her friends. Keep an eye out for her comedic moves, which include lots of humorous elements!

A pure-hearted demi-servant who encountered an unknown UMA by chance on a journey to restore her humanity.

A standard fighter with a massive shield she uses to block attacks and pressure her opponents.

Mash Kyrielight is an in-fighter who uses her “Round Table Shield” in battles. Mash has a lot of straightforward, simple-to-use moves and standard tools, making her an ideal character for fighting game beginners. Many of her moves involve blocking with her massive shield while charging, making her excel in a battle style that can close gaps and take the offensive even against resistance. Her massive shield is also powerful on the offensive, and has a decent reach. Her moves have various effective distances, making her approach powerful when used properly.

■ On Sale on Consoles

There is also a sale underway on PlayStation 4, Nintendo Switch, and Xbox One at this time. Please see below for the sale period. Starting times and sale periods may vary by region.