Impressions: Kirby and the Forgotten Land shoots for the stars

Suck it up, puffball!

Kirby games have never shied away from innovation. Tilt ‘n’ Tumble included accelerators for motion-controlled gameplay, Canvas Curse gave us a stylus-focused platforming experience, and Mass Attack meshed the Kirby brand with Lemmings-style mechanics, just to name a few. The desire within HAL to always push Kirby forwards in some way has been a core thread of the franchise, and it’s definitely present in Kirby and the Forgotten Land.

Way back in the GameCube days, Nintendo and HAL were hoping to bring Kirby into the world of 3D. While the likes of Mario, Donkey Kong, and others had long since made the jump into the third dimension, Kirby was yet to make the big move. Unfortunately, the brains behind Kirby just couldn’t hit the level of quality they wanted with their 3D Kirby efforts, so the GameCube outing was shelved indefinitely. 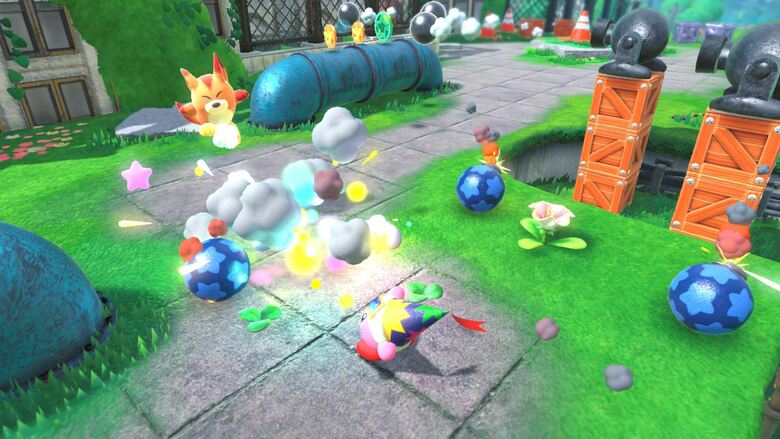 Right off the bat, the demo for Kirby and the Forgotten Land feels like something special. The way Kirby washes up on the shore of an unknown land, staring at the new adventure ahead of him, surely feels like a moment welcoming Kirby to the world of 3D. As the player, we get to take in the new feeling of guiding Kirby in 3D with some gorgeous, colorful visuals, but also, a quiet background. There’s no music playing as you explore the opening moments of a lush, overgrown forest. It’s a short segment that ends with Kirby walking out into the open, greeted by the grand vista of a long-abandoned skyscraper, as well as the game’s main theme. It’s an absolutely beautiful opening, and one that appropriately recognizes the importance of this moment in Kirby’s history.

While the locations you visit might not be the vast expanses we’ve come to experience in Mario games, Kirby and the Forgotten Land certainly gives us more 3D space to explore with Kirby than ever before. If you’ve played Super Mario 3D World, then you should have a great idea for what to expect from Forgotten Land. You’ll wander into areas that allow for a bit of open exploration, with secrets hiding behind walls and just out of sight, and then stumble upon spots that are locked with a bit more straightforward or side-to-side movement. While commonplace for other Nintendo franchises in this day and age, getting to enjoy a Kirby game with this level of freedom feels borderline unbelievable.

All of Kirby’s traditional moves feel brand-new, as now you’re using them within a 3D space. Tossing bombs is much more hectic, swordfights allow you to dance around enemies, and the cutter offers more range than ever. In just a few short moments with the demo, I could see how using Kirby’s infamous copy abilities in 3D would present all sorts of new gameplay opportunities. It also added a slight layer of challenge to the demo, which isn’t something Kirby games are known for (at least when talking about the main quest content). Don’t get me wrong; the demo for Kirby and the Forgotten Land is incredibly easy, but there is a tiny bit of getting used to Kirby’s copy abilities and traditional moveset in this 3D setting. 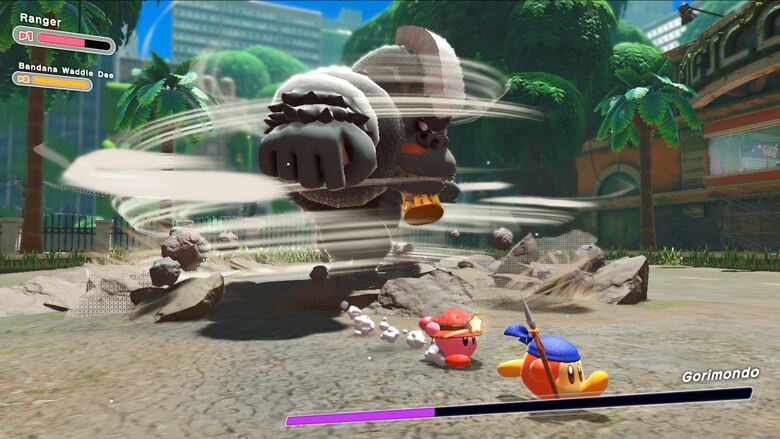 As indicated by the recent trailers, the real star of the show in Kirby and the Forgotten Land is Kirby’s new Mouthful Mode. Kirby can now suck up some pretty giant items, letting him take on their shape, as well as all-new abilities. This demo lets you take Mouthful Mode for a spin in multiple ways, giving you the chance to chomp down on a car, vending machine, and traffic cone. Even in this demo, the early examples of Mouthful Mode show how exploring the environment in new Kirby forms will create unique puzzles and challenges. Most importantly, the Mouthful Mode abilities are plain fun! Zipping around as a car at super speeds and smashing through cracked ground as the traffic cone were an absolute blast, and make me incredibly eager to see what other oddities we can gobble up.

The demo even throws in a boss fight, which does a great job of showcasing just how engaging and cinematic these moments are going to be. Thanks to the new perspective, Kirby’s foes now appear bigger than ever, with the Gorilla boss in this demo easily towering over Kirby. He’s also got quite a repertoire of moves, providing a rather decent challenge early on. If this battle is any example of what we can expect later in the game, then we should be in store for some really memorable tussles.

Kirby and the Forgotten Land’s demo can be wrapped up in under a half hour, but for me, it did exactly what it needed to do in that time. It showcased just how big of a game-changer Kirby’s move to 3D is, and it left me wanting more…a lot more. I was really excited to get hands on with Kirby and the Forgotten Land since its first reveal, but now having played a tiny sliver of the final game, the wait for launch is going to be that much harder. I greatly enjoyed everything I saw and did, and I know what’s ahead is going to be even more impressive.

If you’ve never played a Kirby game, or you’ve been on the fence with Kirby and the Forgotten Land, this demo is the perfect way to either ease you in or assuage your fears. It’s free, it’s live right now, and it’s a wonderful way to spend 30 minutes. Hop on the Switch eShop right now and grab it!